A new movie, The Report, documents the Senate struggle to inform the public about our wartime waterboarding and "enhanced interrogations." 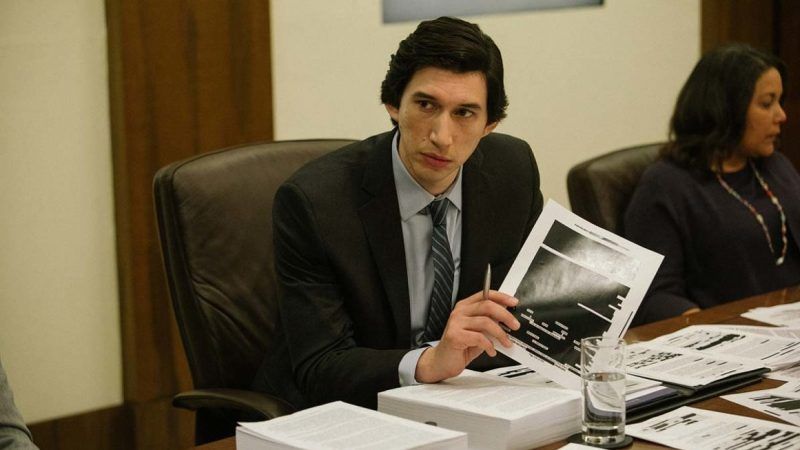 It's been nearly five years since the Senate Select Committee on Intelligence, after a long fight with the CIA and a reluctant Obama administration, released part of a heavily redacted report that described the extent of CIA abuse of prisoners in Iraq and Afghanistan. The report determined that the torture failed to gather new intelligence and was much more brutal than policy makers had been told.

Now that fight to investigate the CIA and release that information to the public has been dramatized in a movie, The Report, which Amazon Pictures is distributing to theaters November 15. Adam Driver (a.k.a. Kylo Ren in the new Star Wars trilogy) stars as Daniel J. Jones, the real-life lead investigator and author of the Senate's report on the CIA's detention and interrogation program. Annette Bening portrays Sen. Dianne Feinstein (D–Calif.), who as then-head of the intelligence committee commissioned the investigation and fought for the public release of part of the report.

Here's the trailer that dropped yesterday:

The movie had its public premiere back in January at the Sundance Film Festival, and it received generally positive reviews. It's the anti–Zero Dark Thirty, highlighting how the CIA attempted to cover up its torture of terror suspects and then inaccurately insisted that this torture garnered valuable useful intelligence. According to a review at IndieWire, the movie specifically references Zero Dark Thirty, which has been criticized for allowing CIA officials to manipulate the story. The reference is apparently not a positive one. (The reason the movie's official title is so vague is because the word "Torture" is redacted in the marketing imagery for The Report.)

While the torture began under President George W. Bush, the fight to investigate the CIA's tactics and report out the results took place under President Barack Obama. According to Vanity Fair reviewer Richard Lawson, The Report does not shy away from the role Obama's administration played in attempting to keep this information out of public view:

What the investigation uncovers is horrifying: not only did the C.I.A. do this stuff, but the agency pretty quickly knew that it didn't yield any real intel. Yet it continued anyway, essentially to save face. What The Report also details is how the nascent Obama administration, though it swiftly ended the enhanced interrogation program after the inauguration, nonetheless worked to stifle the report in order to maintain a harmonious relationship with the C.I.A. If you aren't already frustrated with the knotted, gunky, favor-trading mechanics of Washington politics, here's The Report to give you another dose.

When the torture report initially dropped five years ago, I read as much as the redactions allowed and noted that outside the horrifying details of what the CIA actually did—not just waterboarding, but forced enemas, slamming people into walls, slapping them, and freezing them—much of the 500-page document was devoted to the complicated, opaque bureaucratic apparatus that shielded everybody from responsibility, even when the CIA secretly surveilled the Senate staffers putting the report together to find out what CIA records they were looking at.

Ultimately, after a round of news coverage of the worst details in the report—and some limp attempts by CIA officials to find fault with it, though more than a year later they quietly admitted the facts in the report were true—interest in the report faded. Meanwhile, on the campaign trail, Donald Trump declared his support for waterboarding suspected terrorists.

Lawson wonders how well the movie will perform, given that Amazon apparently paid $14 million for the global rights. As horrible as that torture was, it seems almost quaint now that we are abusing and neglecting detained immigrants in terrible conditions right here, right now, in the United States, and they're dying.

I'll be heading out to the movies in November to see how well The Report covers the details, politics, and bureaucratic ass-covering that took place back then. I might be pretty lonely in the theater, though.