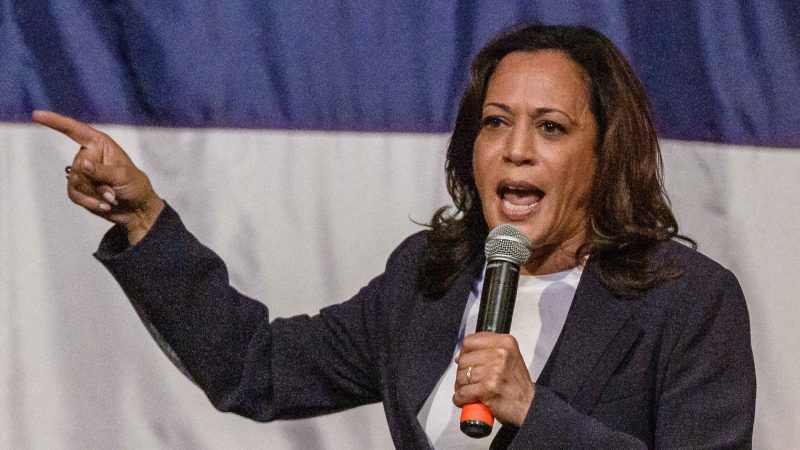 Sen. Kamala Harris (D–Calif.), who is seeking the 2020 Democratic presidential nomination, says that if elected she will push legislation that would authorize federal courts to issue gun confiscation orders against people who express opinions that may indicate an intent to commit a hate crime. These "domestic terrorism prevention orders" would "temporarily restrict a person's access to guns if they exhibit clear evidence of dangerousness," including "violent racist threats or anti-immigrant manifestos."

Harris' plan to "disarm violent hate" is pretty vague, so it's hard to say whether it would be consistent with the First Amendment. If the bill she imagines would merely create a federal "red flag" law focused on a subset of people deemed a threat to others, that would be bad enough, since these laws generally give short shrift to due process. But her description of the problem she is trying to address suggests that constitutionally protected speech might by itself be enough to suspend someone's Second Amendment rights.

"From El Paso to the Tree of Life Synagogue, and from Poway to Mother Emanuel Church," her campaign website says, "one thing is clear: Guns are the weapon of choice for domestic terrorists and perpetrators of hate crimes….Whether it's violent racist threats or anti-immigrant manifestos, signs of impending violence are often evident before tragedy strikes." While that may be true in retrospect, it does not mean that all racists, nativists, white supremacists, or anti-Semites who express their views online, or even a significant percentage of them, are bent on mass murder.

Harris mentions the 2018 shooting in which Robert Bowers murdered 11 people at a Pittsburgh synagogue. Prior to the attack, Bowers posted a bunch of anti-Semitic comments on Gab. In his bio, he described Jews as "the children of satan," and his posts and reposts railed against Jews and the Latin Americans whose illegal immigration he believed they were facilitating. "He was clearly obsessed with Jews," Alex Amend of the Southern Poverty Law Center wrote after the attack. "In the small window into his account currently available, it's evident he engaged with numerous antisemitic conspiracy theories that have long been in circulation among neo-Nazis and white nationalists."

But the clearest intimation of impending violence did not appear until the morning of the attack: "HIAS [the Hebrew Immigrant Aid Society] likes to bring invaders in that kill our people. Screw your optics, I'm going in." By the time that message was posted, it was too late for police intervention, let alone a "domestic terrorism prevention order."

It's not clear how the law Harris supports would distinguish between run-of-the-mill anti-Semites and the tiny percentage of them who, like Bower, translate their hateful beliefs into homicidal action. If everyone who circulates messages like the ones Bower posted would be a candidate for a gun confiscation order, the law would be casting a very wide net, undermining First Amendment as well as Second Amendment rights.

A similar problem is evident in connection with another shooting that Harris mentions: the 2015 attack in which Dylann Roof murdered nine people at the Emanuel African Methodist Episcopal Church in Charleston, South Carolina. Several months before that attack, Roof posted a manifesto that described blacks as inferior to whites, minimized the evils of slavery, defended segregation, and called for "drastic action" to "take…back" the country. Here is the passage that, in retrospect, distinguished Roof from all the racist idiots with equally odious views who do not commit mass murder:

I am not in the position to, alone, go into the ghetto and fight. I chose Charleston because it is most historic city in my state, and at one time had the highest ratio of blacks to Whites in the country. We have no skinheads, no real KKK, no one doing anything but talking on the internet. Well someone has to have the bravery to take it to the real world, and I guess that has to be me.

Since we know what Roof ended up doing, that passage seems like an obvious threat of violence. But "fight" and "tak[ing] it to the real world" are so ambiguous that it's hard to see how Roof's venting would qualify as a "true threat" unprotected by the First Amendment. In combination with other evidence, such talk might suffice to show that someone poses a "significant" danger, the standard typically prescribed by red flag laws. But by itself, racist pontificating is constitutionally protected, and it is rather troubling that Harris does not even mention freedom of speech as a consideration.

Although Harris says the law she favors would be aimed at individuals "who may imminently perpetrate a hate crime," it's not clear what that means. As with red flag laws generally, the devil is in the details.