A very weird take on a vintage mystery. 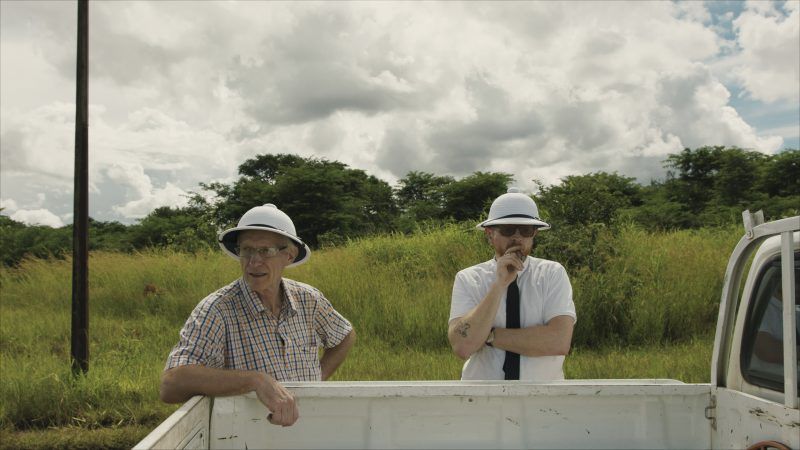 I don't think it's a spoiler to reveal that toward the end of this documentary about the still-unresolved 1961 death of UN Secretary General Dag Hammarskjöld, the film's Danish director and star, Mads Brügger, confesses the following:

Cold Case Hammarskjöld is a deeply wack piece of work—the kind of doc Errol Morris might make if he were recovering from a serious head injury. On one hand the film assembles quite a bit of provocative research (not all of it new) about the plane crash in which Hammarskjöld lost his life. After his DC-6 plunged to Earth near the small mining town of Ndola, in what was then Northern Rhodesia, blame was first ascribed to "pilot error." However, given Hammarskjöld's record of championing African independence movements, and thus annoying the resident colonial occupiers, who were much-attached to the continent's abundance of minerals, diamonds, gold, and oil, one could imagine other causes.

Brügger sets out to solve this still-uncracked case in the company of an independent Swedish investigator named Göran Björkdahl, who has already done quite a bit of prep work in tracking down surviving witnesses. Confronted by Brügger's effusive self-absorption, the mild-mannered Björkdahl adopts an expression of stoic despair that recalls Inspector Clouseau's stooge-lieutenant in the old Pink Panther movies, the long-suffering Hercule. And for good reason.

We first meet Brügger in a hotel room in Kinshasa, in the Democratic Republic of the Congo. He's dressed all in white—jeans, sneaks, shirt—because, he says, "I know for a fact that the villain of this story, he wore only white; he stayed here in 1965, and he was dressing the way I'm dressing now." He doesn't seem very confident about the story he's trying to tell ("This could either be the world's biggest murder mystery or the world's most idiotic conspiracy theory") or the film he's trying to make—which he's framing with two female black African typists whose function in scene after scene is to nod at his endless exposition and somehow restrain themselves from bopping this guy as he fills them in on recent African history.

Early on, we can feel Brügger's interest in the Hammarskjöld mystery shifting toward something more colorful: a probably bonkers mercenary chieftain named Keith Maxwell, late leader of the South African Institute for Maritime Research (SAIMR), a secretive organization whose purposely uninteresting name obscured its lethal pro-apartheid activities—among them, according to this film, the spreading of the HIV virus across Africa via a network of sinister free clinics (a deplorable assertion and a virtually impossible project, according to a scientific report cited at the very end of the film).

Maxwell was clearly a piece of work (he donned full-dress 18th Century commodore's uniforms for special occasions), but so is Brügger in his lesser way. On a mission with Björkdahl to dig up the buried wreckage of the Hammarskjöld plane in present-day Zambia, he brings along a nitwit explorer's kit: two pith helmets, two shovels, one consumer-grade metal detector, and two Cuban cigars with which to celebrate after they've unearthed their mangled treasure. We see them out in a field, digging, under the amused eyes of local black officials. Then we hear Brügger say, "I'm having blisters," and putting down his shovel and walking away. Next we see him and Björkdahl sitting on a nearby bench, chatting, while out in the field a black man does the rest of their digging for them.

As Brügger and Björkdahl wend their way deeper into the old secret world of apartheid Africa—a place populated by very bad men with handles like "Congo Red" and "The Lone Ranger" —the picture makes a pretty solid case for the identity of the person who caused Dag Hammarskjöld's death. But that was never Brügger's primary interest. "To me," he says, "Dag Hammarskjöld was a ticket to all the things I really enjoy: tracking down Belgian mercenaries, telling tales of evil men who dress in white…rumors about secret African societies. That's why I went along for the ride."

If Brügger's jokey search for a solution to the Hammarskjöld mystery seems to have mostly been a game, black Africans themselves know there's little in their political history to laugh about. "People are greedy," says a former mercenary at the movie's conclusion. "People want what others have got, and they don't want to pay for it. That's why they come to Africa."