Will Brexiters Bring Free Trade Back to Britain?

They can and they should, but it won’t be easy. 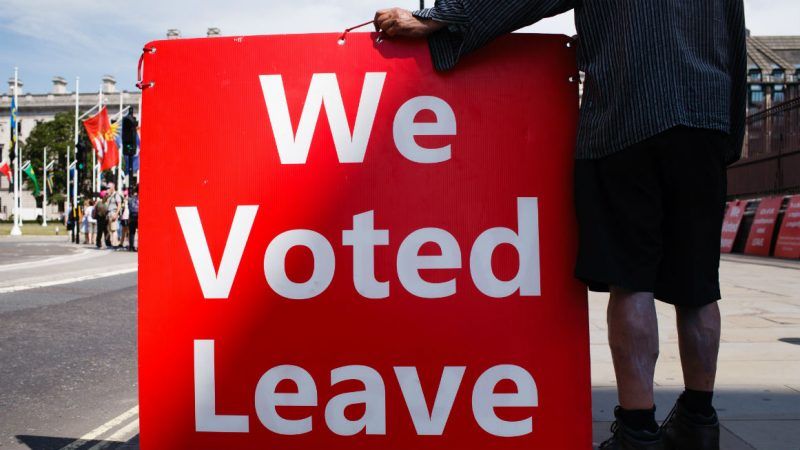 For supporters of Brexit and free trade, this week appeared to bring good news. On a visit to London, U.S. National Security Advisor John Bolton promised to move Britain to the front of the line for a trade deal with the United States. Bolton flipped President Barack Obama's pre-referendum warning about the consequences of leaving the European Union and restated the Trump administration's desire to help the United Kingdom make Brexit work.

However, there are many reasons to remain skeptical about the chances of a U.S.–U.K. deal—whether it's a comprehensive agreement or the series of accelerated sector-by-sector pacts proposed by Bolton. Democratic House Majority Leader Rep. Nancy Pelosi (D–Calif.) reiterated on Wednesday her determination to block any deal in Congress if Brexit undermines the Good Friday Agreement that brought peace to Northern Ireland. If Brexit means imposing a strict border between Northern Ireland, which is part of the U.K., and the Republic of Ireland, a sovereign country and E.U. member, Pelosi is a hard no. That means the U.K. can't strike a deal with the U.S. unless and until the U.K. settles the terms of its separation from the European Union.

Meanwhile, Bolton's side deals appear to breach the World Trade Organization rule that countries cannot be treated differently other than under a fully-fledged trade deal.

But there is a deeper problem that advocates of a U.K.–U.S. trade deal in London must reckon with. It is a problem that goes to the heart of what Brexit will mean for Britain, and whether the country really wants to make good on the opportunities presented by the decision to leave the E.U.

Seventeen-and-a-half million people are unlikely to agree on very much, and so it is with those who voted to leave the European Union. They painted wildly different futures on the blank canvas that is Britain after Brexit. One of the most striking contradictions within this uneasy coalition has been on trade.

For Euroskeptic politicians and thinkers, E.U. protectionism has always been high on the list of reasons for getting out. As an E.U. member, Britain's trade policy was outsourced to the E.U. bureaucrats in Brussels, who have been sluggish in striking deals with the rest of the world. Foreign suppliers aren't just up against the E.U.'s punishing tariffs, but in many cases their European competitors also have support from Brussels. The most notorious of these schemes has long been the Common Agricultural Policy, a subsidy for E.U. farmers that eats up more than 40 percent of the bloc's budget and often involves a cash transfer from European taxpayers to some of the continent's wealthiest landowners. The Queen receives around $850,000 a year for her Sandringham estate alone.

Brexit, voters were told, was a chance to do things differently. Under the banner of "global Britain," politicians made the case that, free from European constraints, a nimble U.K. could swiftly strike deals where the E.U. had been dragging its feet.

The same commitment to free trade cannot be found among Brexit-supporting voters. In fact, polling commissioned by CapX last year found that the single best predictor of someone supporting protectionist policies was voting for Brexit in the E.U. referendum.

Ever since the Brexit vote in 2016, the government has continued to whistle the free trade tune but failed to level with the British people about the tradeoffs involved. Instead, it has indulged in round after round of "cakeism"—a word that has entered British politics in recent years to describe politicians' preference for having one's cake and eating it on all things Brexit. On a potential U.S.-U.K. deal, that has meant talking up the benefits of such an agreement while indulging interest groups who have practiced industrial-scale fearmongering about nasty American capitalists getting their grubby hands on the U.K. economy. For example, rather than rebutting unfounded concerns about chlorine-washed chicken (which has become a symbol for lower regulatory food standards in the United States) and making the case for consumer choice, British ministers have pandered to the scare stories and committed to upholding E.U. food standards after Brexit. Elsewhere, Brits are told that a trade deal with the U.S. would somehow lead to the privatization of Britain's National Health Service. A lack of any reasonable way in which that might happen hasn't stopped the panic.

The lesson for U.K. politicians who want the country to live up to the "Global Britain" slogan is that they cannot underestimate the work there is to be done, not just in negotiating rooms with future trading partners, but with the British people. That means decisively siding with the consumer—and against the vested interests that will always push for barriers to protect them from competition. It means restating from first principles the win-win benefits of free trade and eschewing the mercantilist rhetoric that comes with the give-and-take of trade negotiations.

It has been almost half a century since Britain ceded control of its trade policy to the E.U. As a result of Brexit, we are learning the politics of trade all over again. The evidence is on the side of the free-traders, but they should not assume that the people of Britain understand that such openness will give them more choice and make the country better off.

How this story ends is of global significance. As the Chinese-American trade war grinds on, making both sides poorer than they otherwise would have been, the world is crying out for a good news story on trade. Brexiteers have long dreamed that Britain could be exactly that: proof positive that trade liberalization need not mean surrendering sovereignty to a supra-national organization, and proving that, in leaving the E.U., the U.K. was opening up to the rest of the world, not shutting itself off.

But three years on from the referendum, those remain open questions. Britain is hardly any closer to deciding what kind of country it wants to be. If free trade advocates want to find themselves on the right side of history, they should not underestimate how much work is left to do.

Oliver Wiseman is the US Editor of The Critic, a British magazine. He is based in Washington, DC.