Beto's Reboot: So You're Saying There's Still a Chance?

Former media darling halted his long poll slide after the El Paso shooting by blaming it on Trump, and is now hoping Democrats forget his past centrism. 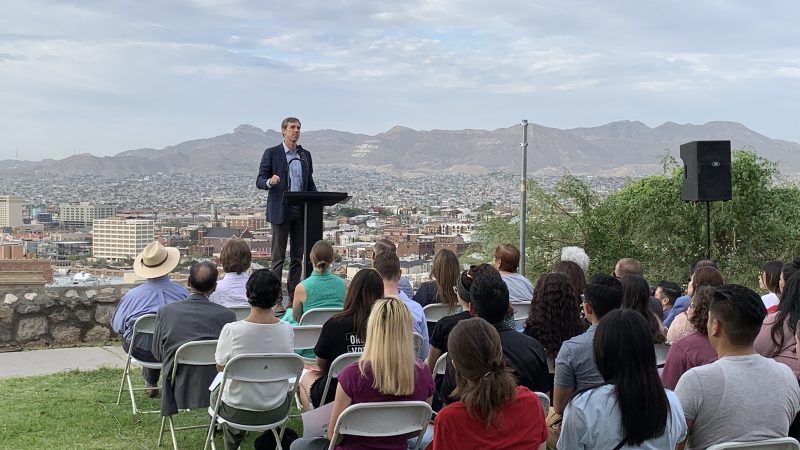 It is both easy and enjoyable to make fun of Beto O'Rourke's flagging presidential campaign for the Democratic nomination, which the former Vanity Fair cover boy attempted to reboot this morning in his grief-stricken hometown of El Paso with a passionate speech that was delivered, his spokespeople helpfully inform us, "without a teleprompter or prepared remarks."

Previewing the pivot with a mouthful of mirth last night was Fox Business Network's Kennedy:

But O'Rourke, who in his remarks ruled out another Senate run (even as John Hickenlooper, while announcing today his withdrawal from the 2020 Democratic presidential primary race, suggested that he might take a shot at Colorado Republican Sen. Cory Gardner), should not be counted out just yet. Yes, he's been stuck in sixth place since spring, and polling nationally all summer at around 3 percent, but it's worth remembering that at this time in the 2008 primary season political journalists and snarky commentators were preparing their obits for the then-fourth place Republican, a cat named John McCain.

Sure, McCain's national polling of around 11 percent back in August 2007 was significantly better than O'Rourke today, but Bill Clinton was at 7 percent (fourth place) in the second half of 1991, George McGovern was at 6 percent (fifth place) at that point in 1971, and Jimmy Carter less than 1 percent (13th place) in 1975. Longshots historically can win, and 2019 politics are nothing if not volatile.

And since the El Paso shootings, and O'Rourke's subsequent viral "What the fuck?" video, the candidate has finally halted the long, humiliating polling slide that began right around when South Bend Mayor Pete Buttigieg start stealing Beto's youthful, semi-centrist thunder. The last baker's dozen of national polls have O'Rourke at near 4 percent, compared to previous dozen's 2.5 percent.

That might well be a blip, similar to the rise and fall of Sen. Kamala Harris (D–Calif.) after her effective performance during the first round of presidential debates, but O'Rourke clearly feels invigorated by his last two weeks of trading Iowa corn dogs for community grieving sessions and withering critiques of Trump's alleged white supremacy.

Policy-wise, that translates mostly into more strict gun control—today he announced support for a "mandatory" assault weapons buyback (Democratic speak for confiscation), in addition to his usual support for background checks, "red flag" laws, and the closing of various "loopholes." O'Rourke is also re-emphasizing his broadly liberal immigration reforms, as a gut-check contrast to a president "who so openly speaks in racist terms."

As that last quote suggests, this pivot is much more about rhetoric and symbolism than white papers. "To those places where Donald Trump has been terrorizing…our fellow Americans, that's where you'll find me and this campaign," he said. "I'm confident that if at this moment we do not wake up to this threat, then we as a country will die in our sleep."

Sounding maximally #resistance-woke—remember that even prior to the shooting, O'Rourke was confessing his familial history of owning slaves—is one way of de-emphasizing the candidate's less traditionally progressive views on issues such as charter schools, free trade, and the national debt. That's a strategy he has in common, albeit with different issue sets, with a group of his competitors I like to call the Transitionals, as in they are transitioning away from (or at least putting in their back pockets during primary season) whatever deviations from progressivism they were previously known for.

So: Kamala Harris the cop is posing as a criminal justice reformer. Sen. Kirsten Gillibrand (D–N.Y.) is talking less about her past of being a Blue Dog Democrat who opposed the fall 2008 bailout and the 2011 debt-ceiling increase, and more about her future of educating people about "white privilege." Sen. Cory Booker (D–N.J.) is downplaying school choice while upfronting slavery reparations. Budget-balancing free trader Julián Castro has made headlines this campaign mostly by attacking both Sen. Bernie Sanders (I–Vt.) and Beto O'Rourke from the left.

These five youthful Transitionals, of whom only O'Rourke is a white male, can come across with their intersectional rhetoric as super-duper lefties, at least in the eyes of non-Democrats. But in fact, each has plenty of theoretical space to tack back to the center, particularly on economic policies, should they survive a primary, thus having the chance to earn the vote of at least former New York City Mayor Michael Bloomberg.

But they also run the risk of coming across as insincere, getting confronted by their own contrary records, or making wild promises on the fly that they can't possibly fulfill. These troubles do not much haunt Sanders or Sen. Elizabeth Warren (D–Mass.), who, between them, have consistently polled 30 percent nationally most of the year, compared to the 15 percent-to-24 percent range for the five Transitionals combined.

As ever, making concrete political predictions in this atmosphere is a mug's game. But you can safely bet that O'Rourke and the other four ex-neoliberals will spend a lot more energy the rest of the year confronting Trumpian bigotry rather than campaigning on their own past deviations from progressive economics.