Alexandria Ocasio-Cortez: 'I Have a Lot of Common Ground With Many Libertarian Viewpoints' 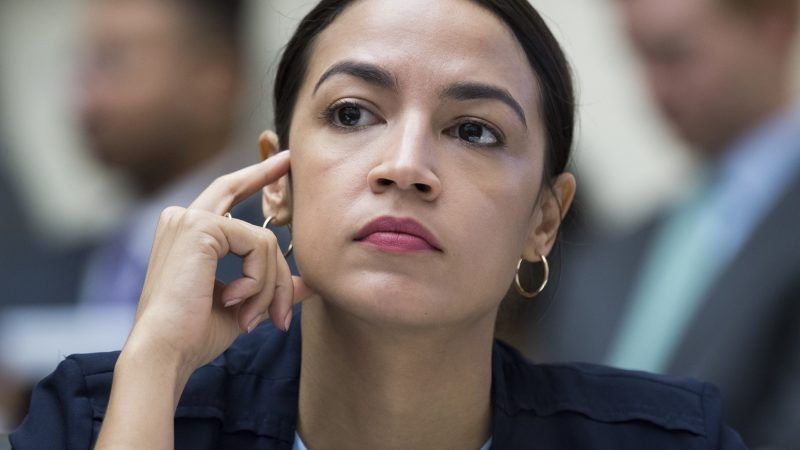 Rep. Alexandria Ocasio-Cortez (D–N.Y.) spends much of her time in the public eye separating herself from the pack in Washington, D.C. Sometimes that means criticizing the GOP, other times, lamenting what she sees as the sheepishness of her own party. But in an Instagram live stream last week, the democratic socialist congresswoman told viewers that she does find some commonality with libertarians.

"I actually think I have a lot of common ground with many libertarian viewpoints in [the Republican] party," Ocasio-Cortez said, emphasizing her stances on immigration, the military, and privacy rights. Her admission comes not long after she and Sen. Ted Cruz (R–Texas) publicly agreed on the need to prohibit former congresspeople from becoming lobbyists, as well as to make hormonal birth control available over the counter.

"True libertarians, which many happen to be in the Republican Party, true libertarian viewpoints are pro-immigration," she explained on Instagram. Advocates of smaller government do indeed acknowledge that immigrants help the economy, and many dismiss the notion that the federal government is capable of determining optimal migration levels.

Ocasio-Cortez also told Instagram viewers that her "anti-interventionist" and "anti-war" positioning fits in line with a libertarian mindset. "From the perspective of small government, there are Republicans who are very consistently anti-war and anti-military spending," she said.

But those libertarian-leaning Republicans are an increasingly small minority within their own party. Just this June, the GOP pushed to pass the 2020 National Defense Authorization Act (NDAA) with a $30 billion increase in spending, after last year's version allotted more than twice the military spending of Russia and China combined. While the Democrats' version of the bill won out in the House, it still increased spending by $20 billion.

That hypocrisy isn't lost on the congresswoman, who criticized the intellectual inconsistency within their ranks. "The Republican Party in Congress is no longer ideological conservative, they are kind of this political mob," she said. "You can't count on them to reliably hold certain views anymore because they will advance certain views if it helps the president but then abandon those same principles if it doesn't help the president."

The GOP has always betrayed its principles when it suits them. Democrats have done the same. In contemporary American politics, no policy is bigger or more important than the party.

Ocasio-Cortez is right, however, that the Republican party's small-government ideals seem to have dissipated even more rapidly under Trump. Congressional GOPers have abandoned free trade and supported massive spending increases without offsetting budget cuts. And the party got a bit dimmer with the recent departure of Rep. Justin Amash (I–Mich.), the libertarian-leaning congressman and erstwhile Republican who left the GOP because he'd had enough of his colleagues' double-dealing.

And with Amash out of the party, Ocasio-Cortez will be hard-pressed to find many libertarian-minded Republicans she can work with.