Reviews: A Score to Settle and Them That Follow

A low-intensity Nic Cage (what’s the point?) and a long-overdue visit with some hillbilly snake handlers. 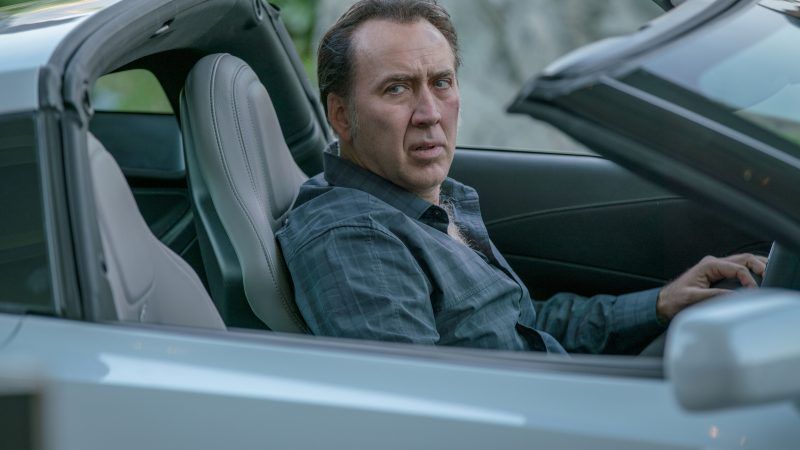 Just as the dire month of August once again gets underway, some film lovers find themselves wandering dazed through the blast radius cleared by last week's release of the new Quentin Tarantino movie, Once Upon a Time…in Hollywood. When was the last time so many fans—critics and otherwise—spent so much time raving and cursing and endlessly debating a major-studio movie? (Is it too un-woke, too guy-centric, too unkind to the Manson Family?) Tarantino's epic (151 minutes) is such an original piece of work—about the movie business and the dreams and fears it provokes, about Westerns both big-screen and small-, about innocence and evil and bloody retro-vengeance—that there seems to be no bottom to it. Having given the movie a "balanced" review after screening, I quickly went and watched it again, and realized that my initial quibbles—about the picture's unhurried plot and pace, and its heavy payload of inside-filmmaking info—weren't flaws but features: that in a script that Tarantino says took him five years to write, there was a carefully considered reason for everything. It now seems to me that Once Upon a Time, distinguished by a new, warm maturity on the director's part and indelible performances by Brad Pitt, Leonardo DiCaprio and Margot Robbie, presents Tarantino at a new peak of craft and imagination.

But now what? Must we just keep rewatching Once Upon a Time over and over again? (True, there are worse things.) Or are we expected to resume numbly partaking of the weekly onslaught of multiplex franchise action, as if the Tarantino film had never happened? (If that's a yes, I commend to you the latest Fast & Furious spinoff Hobbs & Shaw, which I'm sure is fine—I like these movies—at least hasJason Statham and Idris Elba in it.) Apart from that, though…

Well, there is a new Nicolas Cage movie, which will be tantalizing news to those who saw the master in last year's wonderfully psychonautic Mandy—although maybe not so much to those who also caught its followup, the insufficiently deranged Between Worlds. The new Nic offering is a numbskull revenge flick called A Score to Settle, which comes floating in on a raft of Canadian film subsidies, with a loss-cutting lack of serious promotion.

Score is Cage at his least interesting, draggingly earnest and not even a little bit nuts. We meet his character, a onetime mob stooge named Frank, as he's being released from prison after serving 19 years for beating a guy to death with a baseball bat. Frank is being turned loose early because he's suffering from a fatal disease—extreme insomnia—and now all he wants to do is find the son he left behind when he went down all those years ago. The scene in which he's released from the lockup is a model of creative indifference on the part of director Shawn Ku: Frank steps out of a prison door in the middle of the night and just starts walking down a nearby highway. He soon sees another man walking toward him in the distance. It's the son he wanted to start looking for! (His name is Joey and he's played by Noah Le Gros.) Frank and Joey catch a taxi (we appear to be out in the countryside, but whatever) and they head for the house where Frank hid a strongbox filled with $400,000 in cash back in the day—his payoff for taking the fall for the bat-murder, which Frank, clearly an idiot, in fact did not commit.

Frank endeavors to make up for 19 years of absentee fatherhood by taking Joey out shopping. They buy bad suits, expensive watches, and a vroomy sports car, then check into a deluxe hotel. (Well, that's the impression we're supposed to get: This hotel looks like an abandoned McMansion lightly peopled with extras dressed as bellboys and chambermaids.) Joey encourages Frank to pick up a call girl with a heart of gold (Karolina Wydra) and he does. Then he sets out in search of vengeance, against Joey's fervent wishes. First he deals with two old gang colleagues, Jimmy the Dragon (Mohamed Karim) and Tank (Ian Tracey). Then he seeks counsel from an old gang buddy, Q (reliable charmer Benjamin Bratt). The movie, which started out violent and stupid, gets stupider, and then a little more violent, and then it ends, which is one of the best things to be said about it.

More interesting because it's less moronic is a new movie about snake-handling Pentacostal hillbillies (at last!) called Them That Follow. Written and directed by Britt Poulton and Dan Savage, this is a picture with quite a bit to commend it. First there's the cast. Walton Goggins—an actor born to consort with serpents—plays an Appalachian minister named Lemuel, who leads his fundamentalist flock in relying on the Holy Spirit to deliver them out of life's jams, even those traditionally thought to require the services of doctors and hospitals. Lemuel's teenage daughter Mara (Alice Englert) is being coveted by a local lunk called Garret (Lewis Pullman), and such are the strictures of this society that she'll have no say in the matter if Garrett wants to take her for his wife, which he does. Another youth named Augie (Thomas Mann) is the guy Mara herself longs for, although his mother, Hope (the great Olivia Colman, great here once again), is a dark cloud of generalized disapproval. Looking on in sweet, dazed confusion as all these characters interact is Mara's best friend, Dilly (the quietly extraordinary Kaitlyn Dever of Booksmart—like Goggins a veteran of the FX series Justified).

The movie has two admirable aspects. First, its sympathetic depiction of these hardscrabble characters—people who have little else in life but their faith, and who in accord with a biblical injunction regularly test it by draping rattlesnakes about their bodies—is free of the smug mockery so often aimed at such people (for example by me, in the paragraph above). And the cinematography, by Brett Jutkiewicz, presents rural Ohio as an austere landscape of loamy riverbanks, sleepy cow pasture, and scruffy, fluorescent-lit church halls. Jutkiewicz' artful photography, combined with the characters' rigid emotional repression, thickens the movie's dark, smothering drabness, which could make it a gloomy watch for some viewers, maybe most. Then again, maybe not.