Democrats Need To Talk About Immigrants as Assets, Not Supplicants Needing Handouts 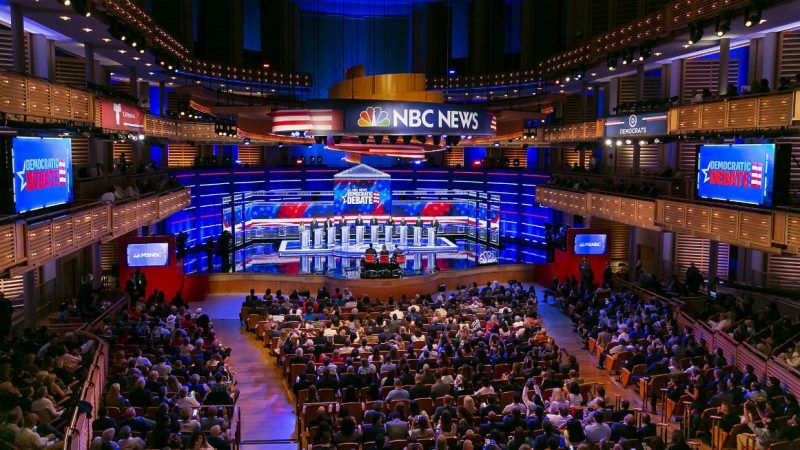 At last night's Democratic presidential primary debate in Detroit, the contenders repeatedly excoriated each other for regurgitating Republican talking points on health care, environment, student debt forgiveness, and government spending. But the one issue on which they all seemed content to play on President Donald Trump's turf was immigration.

For all their lip service to implementing humane border policies that don't involve ripping suckling infants from the breasts of migrant moms, not a single candidate thought to systematically stick up for immigrants because they are good for America. Senator Amy Klobuchar (D–Minn.) came the closest when she noted, "Immigrants don't diminish America; they are America." But that was a single throwaway line in a 150-minute gabfest that none of her rivals picked up. They all talked about immigrants as if they were supplicants—debating whether handing them this or that benefit would draw too many of them—rather than producers and contributors who are the source of America's dynamism and strength.

Bernie Sanders insisted that his universal health care designs wouldn't become a magnet for illegal immigration because of "strong border protections." How precisely his border strongness would avoid Trump-style border inhumanity, he didn't explain (unless you count his suggestion of a hemispheric conclave to chatter about the problem of fleeing asylum seekers). Ditto for Colorado Governor John Hickenlooper. Meanwhile, Beto O'Rourke, the alleged BFF of immigrants who has long sung paeans to the safety of El Paso, the Texas border town where he lives, despite its huge presence of undocumented immigrants, refused to hop on board with plans to decriminalize illegal border crossings. Senator Elizabeth Warren (D–Mass.) did enthusiastically favor decriminalization but beyond that muttered vaguely about "living our values" instead of actually saying something positive about immigrants and what they've done for America.

In other words, Democrats allowed President Trump to control the immigration conversation without him having to get anywhere near the stage.

But if Democrats really want to move the needle on this issue, they will have to change the narrative and talk about immigrants as the assets that they are—rather than the liability that they are not. Democratic candidates ought to be reminding Americans day and night that immigrants don't threaten their jobs and wages. To the contrary, they boost productivity and innovation.

This shouldn't be that hard given that even foes of immigration such as Harvard University's George Borjas (whom I debated here) concede that after accounting for the schooling, health care, and other fiscal costs, immigration still produces a $50 billion annual GDP surplus for the country. One recent study even found that without migration, U.S. economic growth from 1990 to 2014 would have been roughly 15 percentage points lower; and 1.5 percent lower every year from 2011 to 2016, the years after the Great Recession. "This is enough to cancel out the majority of post [financial] crisis gains," the study concluded. In other words, without immigration America would have been in for an even longer recession, which would have hurt native wages.

More immigration boosts productivity by removing crucial labor bottlenecks in the low-skilled and high-skilled industries where there aren't enough Americans able or willing to do the jobs. But it also boosts innovation because new people bring new ideas.

Everyone accepts that an increase in skilled migration directly increases the aggregate level of mental capital, the lifeblood of a knowledge economy. But even more low-skilled immigration ultimately boosts the availability of this capital. How? Low-skilled workers relive high-skilled workers (especially women) from menial chores, allowing them to devote themselves to other pursuits.

It is hardly an exaggeration to suggest that if America's economy has become the innovative hub of the world, dominating virtually every industry in the 21st Century from IT to Media/Entertainment, it is because of immigration.

Indeed, immigrants and their children were responsible for founding 46 percent of all the Fortune 500 companies in America in 2017, including, of course, Apple, which was started by the son of Syrian refugees. Immigrants have started more than half (44 of 87) of America's startup companies valued at $1 billion dollars.

Between 2000 to 2017, immigrants won nearly 40 percent of the Nobel Prizes for America —and we aren't talking about the fake Nobel Peace Prize that President Obama won before he started drone-bombing foreign lands into the stone ages, but those in chemistry, medicine, and physics. About 83 percent (33 of 40) of the finalists of the 2016 Intel Science Talent Search, the leading science competition for U.S. high school students, were the children of immigrants. In fact, 75 percent—30 out of 40—of the finalists had parents who worked in America on H-1B visas. That compares to seven children who had both parents born in the United States. Heck, a 2006 study by the National Foundation for American Policy even found that the great American sport of baseball would be far less great without immigration:

In the American League in 2006, 7 of the top 9 batting averages belonged to foreign-born players, while the leading home run hitter (David Ortiz) and the two leaders in runs batted in (Ortiz and Justin Morneau) were foreign-born.

And even as folks like Rep. Steve King (R–Iowa) yammer about saving Western civilization from foreign hordes, said hordes are saving the English language. Indeed, even as natives are forgetting how to spell, foreigners have been dominating the National Spelling Bee competition, including this year, when 7 of the 8 finalists were Indian Americans.

Despite these massive contributions from immigrants, Democrats are allowing President Trump to depict them as moochers and criminals who threaten American culture. Until they wrest the conversation back from him and set the record straight on just how vital immigration is to this country's success, even if one of them wins the White House, he or she won't be able to accomplish zilch on this issue, presuming that they want to.