Beto vs. Warren Is the Trade Policy Debate Democrats Need To Have

Unlike many other policies proposed by Democratic presidential hopefuls, trade policy is something a new president can unilaterally impose. 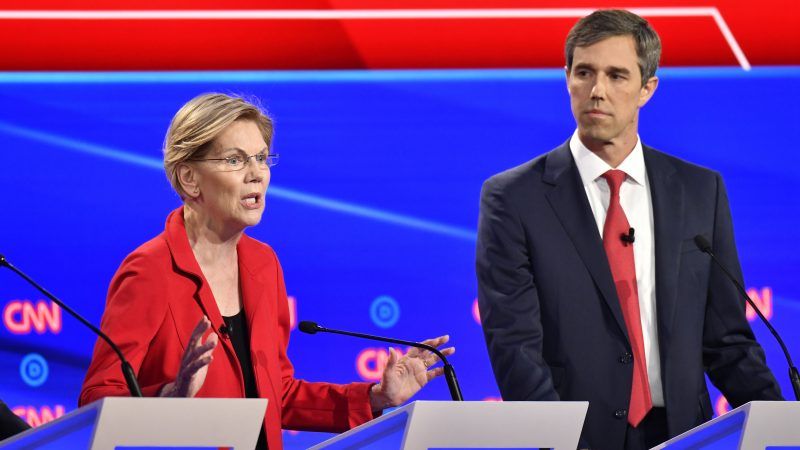 If the two-plus years of President Donald Trump's tenure have taught us anything, it's that even a scandal-plagued, generally incompetent chief executive who lacks strong congressional allies can have tremendous influence over trade policy.

That's all the more reason for Democrats to focus on exactly that issue.

Former congressmen Beto O'Rourke of Texas and John Delaney of Maryland are both struggling with fundraising and in the polls, but both did their part during Tuesday's primary debate in Detroit to highlight an important schism in the Democratic field. On one side are candidates who recognize the value of international trade, and on the other, those who dismiss it as a tool of capitalists bent on hollowing out the American working class.

The latter camp is where you can find frontrunners like Sens. Bernie Sanders (I–Vt.) and Elizabeth Warren (D–Mass.), the two highest-polling candidates to participate Tuesday night. They are pitching protectionist trade policies that effectively mirror much of what Trump has done. Sanders on Tuesday bragged of his track record in opposing the North American Free Trade Agreement (NAFTA) and other trade deals. He railed against corporations for trying to "save five cents by going to China, Mexico, or Vietnam, or anyplace else, that's exactly what they will do" and bizarrely tried to blame Detroit's economic depression on Trump-era trade policies.

Meanwhile, in a policy paper unveiled this week, Warren effectively rules out signing trade deals with developing nations until they adopt American standards for labor laws, environmental rules, and more. On Tuesday night, she defended that stance. "People want access to our markets all around the world," she said. "Then the answer is, let's make them raise their standards."

That sounds a lot like Trump, doesn't it? Warren is seeking progressive ends rather than chasing a supposedly unfair trade balance, but the fundamental thought process is the same: use America's collective economic might to force other nations to change their behavior.

Like Trump, she misses the big picture. Trade is not conducted country-to-country but by the individual choices of millions of people along complex supply chains that stretch around the world. Governments can't dictate the demands of consumers, all they can do is determine how easy or difficult it will be for goods to pass across national borders. Clearly, Warren and Sanders (like Trump) seek to make it more difficult.

But Democrats don't have to settle for Trumpism wrapped in progressive rhetoric. Delaney attacked Warren's trade policies from a position many Democrats held just a few years ago. He pointed out the Obama administration's efforts to open up greater trade through the ill-fated Trans-Pacific Partnership (Trump yanked America out of the TPP shortly after being inaugurated), and called for Democrats to oppose those who want to "build economic walls."

Warren's plan, he said, "would prevent the United States from trading with its allies. We can't go and—we can't isolate ourselves from the world."

Delaney's right. Cutting off trade is not the way to improve labor standards and working conditions in developing countries. Indeed, the United States puts trade embargoes on countries as a way to punish them, not help them. Warren's plan relies on magical thinking and fundamentally misunderstands how trade works.

Beto jumped into the fray to make another important point that hits closer to home. Tariffs, he said, "are a huge mistake" that "constitute the largest tax increase on the American consumer, hitting the middle class and the working poor especially hard."

"When have we ever gone to war, including a trade war, without allies and friends and partners?" O'Rourke asked, nodding towards both the TPP (envisioned as a way to counteract China's economic rise) and Trump's trade isolationism.

Trade policy should be a central concern for Democratic primary voters—for both political and practical reasons.

Politically, whichever candidate wins the primary will have an opportunity to hit one of Trump's obvious weaknesses by stressing how tariffs are harming Americans more than they are helping—exactly the type of argument O'Rourke deployed Tuesday night.

But Warren can't make that case when her own trade policy paper says "tariffs are an important tool" as part of a "broader strategy" to reshape global trade. Sanders can't, either, given his longstanding hostility to trade deals like NAFTA and TPP, which are predicated on lowering tariffs and easing cross-border trade.

It's worth noting, too, that most Democratic voters seem to side with O'Rourke and Delaney. Polling data released this week by the Pew Research Center shows that 65 percent of Americans—and majorities of both Democrats (73 percent) and Republicans (59 percent)—say that signing free trade agreements is a good thing. Among Democrats, that figure is the highest since Pew started asking about trade in 2009.

Practically, trade matters more than other policies because it's an area where the president can make an immediate impact regardless of other political considerations.

In other words, a victorious Democrat taking office in January 2021 will struggle to implement Medicare for All or any other national health care plan unless voters also hand Democrats a veto-proof majority in the Senate; yet that outcome seems highly unlikely given the Senate seats in play in 2020. But thanks to a decades-long trend of Congress handing unilateral trade authority to the president—a trend that has not been reversed during Trump's tenure, even as he has abused those powers—a future President Warren or President O'Rourke will have the power to reshape how the world's largest economy deals with every other nation on the planet, and he or she will be able to do it with limited congressional oversight.

Democratic voters, even if they aren't inclined to vote for O'Rourke or Delaney, should demand better than Warren's trade policy of warmed-over Trump-style protectionism with a veneer of magical progressive thinking and the promise of being executed in a less incompetent way.