A New Law Would Criminalize Throwing Water on NYPD Officers

It's not politicians' fault that citizens don't respect them. 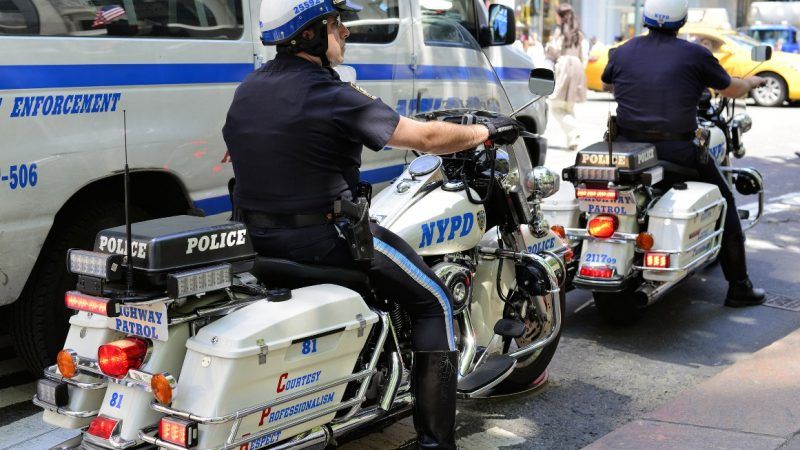 You'd think New York Police Department officers were being tied up and forced to walk the plank the way lawmakers and police union representatives are talking about a handful of incidents in which troublemakers drenched officers with buckets of water.

It's been a hot summer in New York City, and residents are looking for ways to cool off. According to news reports, some NYPD responding to unruly gatherings around open fire hydrants were aggressively mocked and then drenched with water.

Union officials are reacting as though these folks came out swinging with baseball bats. The typically hyperventilating response from the NYPD Sergeants Benevolent Association shrieked that "NYPD cops are in DANGER!" and insists that police are going to get killed as a result of this behavior.

Today, blaming lackluster Mayor Bill De Blasio and "radical leftwing politicians" for a culture of disrespect toward the NYPD, State Assemblyman Mike LePetri (R–Long Island) held a press conference announcing proposed legislation to make it a Class E felony to drench officers with water or any other substance. A conviction could result in a jail sentence of one to four years in prison:

"This time it's water, but what's next? Gasoline? Acid?" LePetri opines. He accuses his Democratic political opponents of creating an "us versus them mentality" between citizens and politicians.

The problem with that argument is that far too many police officers approach their job with an "us vs. them" mentality because their training encourages them to treat every encounter with citizens as potentially life-threatening. This "warrior cop" mentality has led to increased police militarization and made officers fearful of the people they're supposed to protect.

LePetri is encouraging this mentality. Does he think that people are playing around in the street with buckets of acid or having gasoline fights? If "disrespect" toward police is violence, does police disrespect toward the people they're supposed to protect also amount to violence? There are consequences to treating police officers as more fragile than regular people and simultaneously letting them off the hook for bad policing.

What's more, LePetri's bill is largely unnecessary. There have been four arrests of men who were involved in the drenching and charges of harassment, disorderly conduct, and criminal mischief. One man who drenched a couple of officers was ordered held on a $3,500 bail. It's already a crime to throw something genuinely dangerous on a police officer. We don't need a new law to address this program.

To be clear, I'm not trying to downplay the potential for some of these incidents to have turned violent. But saying "Some people threw water at the police and we need to put those people in prison" ignores the mood of the scene. When things did get heated, and one man threw a bucket at an officer making an arrest, the officer exercised an admirable amount of restraint. Not further overreacting probably saved lives.

What LePetri is proposing does not actually help create a better relationship between NYPD officers and the community. It instead fosters an idea among officers that "disrespect" is the equivalent of a threat, and should be met with an arrest and possibly violence. That will only further tatter an already frayed relationship between the NYPD and the New Yorkers they police.