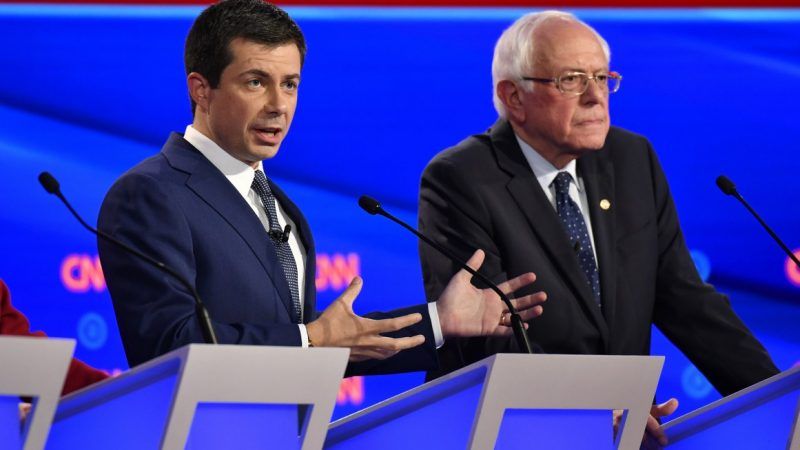 Foreign policy got all of about 15 minutes of attention during Tuesday night's two-and-a-half hour Democratic Primary debate in Detroit. Fortunately, the few Democratic presidential candidates who spoke on the topic made it clear that they favored bringing American troops home and ending our current wars.

When asked about the two soldiers killed in Afghanistan on Monday, both South Bend Mayor Pete Buttigieg and then Beto O'Rourke promised that they would bring all troops home from Afghanistan by the end of their first year in office.

"We will withdraw," Buttigieg said bluntly. "Congress has been asleep at the switch" when it comes to its role in overseeing the authorizations for the president and military to engage in war, he added. Buttigieg proposed that all future Congressional Authorizations for the Use of Military Force come with an automatic three-year sunset, meaning that Congress would have to actually vote to allow military interventions to continue and potentially be held accountable by voters for their decisions.

"We've satisfied the reasons for our involvement in Afghanistan in the first place," O'Rourke said, promising to withdraw troops not just from Afghanistan, but Iraq, Yemen, and any other country where troops were engaged in military activity under the current authorization.

Former Colorado Gov. John Hickenlooper was the odd man out, insisting that pulling all troops out of Afghanistan would create a humanitarian disaster, inexplicably adding, "Look at all the progress that has happened in Afghanistan." In reality, Afghanistan has descended even further into corruption and tribal conflict. The two soldiers who were killed Monday were apparently victims of an "insider attack," meaning they were shot by one of the very Afghan soldiers the U.S. military was training.

Sen. Elizabeth Warren (D–Mass.) added that the military's role is supposed to be limited: "We should not be asking the military to take on jobs that do not have a military solution." Warren has been making her propensity for planning a central part of her campaign ("I have a plan for that") and said that America should have a plan to eventually withdraw troops whenever it sends troops into military action in other countries.

In all, the foreign policy discussion was thin and superficial given that we still have troops in harm's way overseas. A brief discussion of using more diplomacy and less military intervention descended into complaints about President Donald Trump cozying up to foreign dictators. And there was a brief, weird, and completely irrelevant exchange between Warren and Montana Gov. Steve Bullock, who seemed to object to Warren's position that the U.S. should never use nuclear weapons to strike first. And that was about it for foreign policy.

Should we believe them? Both Barack Obama and Trump campaigned on getting troops out of Afghanistan, and yet there our troops remain.

Secretary of State Mike Pompeo says he's been ordered by Trump to reduce troop levels in Afghanistan by next year. We'll see if that actually happens.