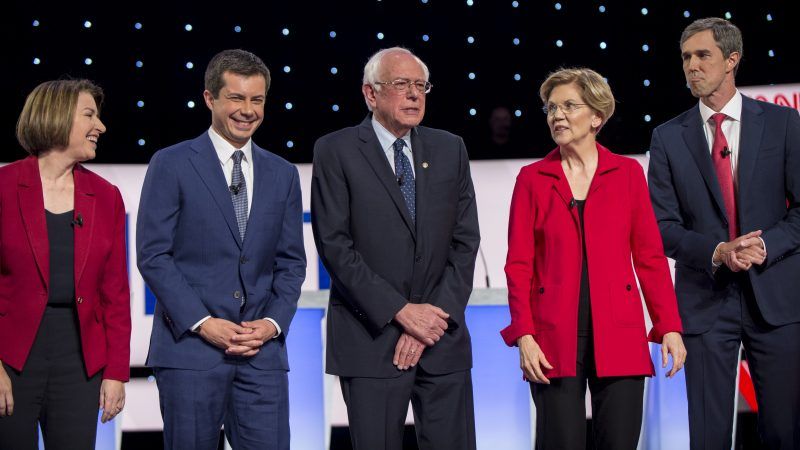 During the CNN presidential debate in Detroit on Tuesday, Sen. Amy Klobuchar (D–Minn.) was asked about her plan to address infrastructure, "including the water issues so that another Flint does not happen again." The question referred to the 2014–2017 crisis in Flint, Michigan—a city 70 miles north of Detroit where contaminated water was linked to deaths of a dozen people from Legionnaire's disease.

Klobuchar responded by proposing massive infrastructure programs that would create new jobs—and union jobs, at that. The senator was in good company: Sens. Bernie Sanders and Elizabeth Warren also talked about the need for more public investment and more government-run programs to create economic prosperity. Both scoffed at John Delaney's contention that there was only so much the government could reasonably accomplish.

The irony, of course, is that the Flint water crisis was a direct result of precisely the kind of job-creation-focused infrastructure plan that so many of the Democratic presidential candidates feel is absolutely necessary to create economic prosperity.

As my colleague Shikha Dalmia wrote in 2016, the decision to cancel Flint's 30-year-old contract with the Detroit Water and Sewage Department (DWSD) and switch to the Karegnondi Water Authority was made in part because the new plan required the construction of an expensive pipeline. "Genesee County and Flint authorities saw the new water treatment as a public infrastructure project to create jobs in an area that has never recovered after Michigan's auto industry fled to sunnier business climes elsewhere," wrote Dalmia. The plan was pure fiscal stimulus, which is why it enjoyed the bipartisan support of Michigan's Republican Gov. Rick Snyder, Democratic State Treasurer Any Dillion, and Flint's Democratic city council.

Many in the media have parroted the absurd claim that the water crisis was caused by austerity, as if the government cared more about saving pennies than saving lives. The truth is exactly the opposite: Keeping DWSD as Flint's water provider was a cheaper option, but one that would have created zero new infrastructure jobs.

Two other notable facts: First, Flint's most pressing problem—prior to the unsafe drinking water, at least—was that its taxpayers could not afford to continue paying the pensions of city government retirees. As I wrote when the Flint water crisis story broke, "As recently as 2011, it would have cost every person in Flint $10,000 each to cover the unfunded legacy costs of the city's public employees."

Marianne Williamson also addressed the Flint water crisis, noting that she used to live in the wealthy Detroit suburb of Grosse Pointe, and "what happened in Flint would not have happened in Grosse Pointe." To the extent that's true, it's because no government bureaucrats have felt the need to promise massive job-creating infrastructure plans to the people of Grosse Pointe.