Fans of the state's new Chick-fil-A law should take a look at the anti–Boycott, Divestments, and Sanctions law. 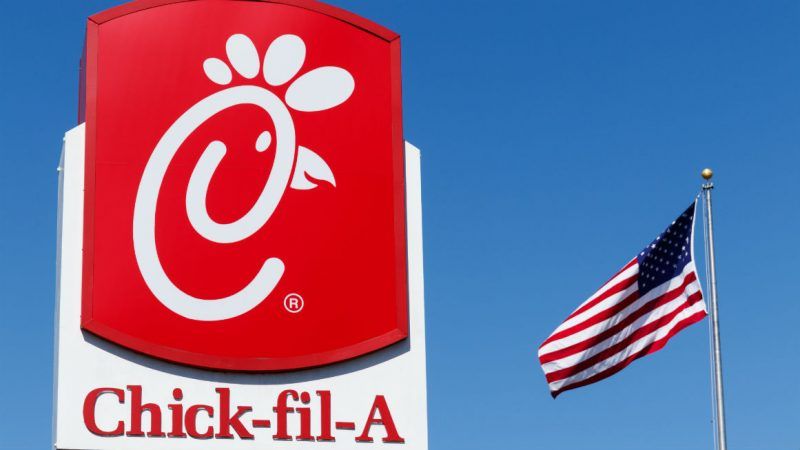 The San Antonio city council voted in March to block the addition of a Chick-fil-A at the San Antonio International Airport, citing the restaurant's "legacy of anti-LGBT behavior." The chicken chain has long been under fire for donating to groups that oppose LGBT-friendly laws, as well as for CEO Dan Cathy's remark that America is "inviting God's judgment on our nation when we shake our fist at him and say we know better than you as to what constitutes a marriage."

The state recently responded with a "Save Chick-fil-A" bill, or Senate Bill 1978, which prevents the government from taking "adverse actions" against a company or individual for exercising religious freedom. After signing the bill, Abbott tweeted: "No business should be discriminated against simply because its owners donate to a church, the Salvation Army, or other religious organization. Texas protects religious liberty."

Abbott felt rather differently about Texas' 2017 law aimed at the Boycott, Divestments, and Sanctions (BDS) movement. That bill barred state agencies from contracting with companies that boycott Israel. At the time, Abbott said, "Anti-Israel policies are anti-Texas policies, and we will not tolerate such actions against an important ally."

There is, to be clear, an important distinction between the two laws. Texas would not be constitutionally allowed to refuse to contract with a business that simply donated to BDS groups or was led by an owner who criticized Israel. But Texas' anti-BDS law targets actions directly carried out by the company itself, not donations or private speech. The legislation's defenders say it is more analogous to a law barring contracts with companies that refuse service to gays and lesbians.

That said, the two bills may not be so far off in principle. While the state of Texas is right to recognize speech and donations as forms of free expression, direct actions can be expressive too. And I wonder how many people's positions on these laws would change if the underlying political causes were different. Suppose a state decided that because representation in the workplace is an important value, it will not extend contracts to companies that did not have a certain number of women sitting on their boards. How many people who hate the anti-BDS law would accept that one? How many who love the anti-BDS law would cry foul?

This is the sort of thing that happens when governments wander into these waters. It's not long before taxpayers find their dollars are supporting a cause with which they fundamentally disagree.