Pelosi Rejects Plan to Cut Spending by Less Than 0.3 Percent

The federal government will spend $57 trillion over the next 10 years and run an $11 trillion deficit. But cutting spending by $150 billion is too much to ask?

Speaker of the House Nancy Pelosi (D–Calif.) rejected a White House offer on Friday to cut $150 billion in federal spending over 10 years as a part of a possible deal to raise the debt ceiling.

Now, $150 billion might sound like a large amount of money. But relative to how much money the federal government is set to spend over the next 10 years, the White House's proposed cut is roughly equivalent to deciding you'll eat one fewer Chipotle burrito per month for the next decade. That's not going to pay off a maxed-out credit card.

The fact that Pelosi rejected such a comically small reduction without even giving her colleagues the chance to consider it tells you all you need to know about the state of fiscal responsibility in Washington right now.

Bloomberg reports that the White House provided House leaders with roughly $500 billion in possible budgetary offsets on Thursday night, asking that the Pelosi find $150 billion in cuts that her members would support. Both sides are continuing to negotiate in advance of a planned vote on raising budget caps and the debt limit next week. The Treasury has been using so-called "extraordinary measures" to deal with the debt limit since March, when the U.S. surpassed the current limit of $22 trillion.

It's possible that spending cuts will be part of whatever final deal is reached, but it's still worth stressing just how absurd a negotiating position Pelosi is taking here—if she does indeed stick to saying that $150 billion is too steep a cut.

The Congressional Budget Office (CBO) projects that the federal government will spend more than $57 trillion over the next decade. A $150 billion cut amounts to less than 0.3 percent of all spending during that time. In the context of a $50,000 annual household budget, that's like cutting about $150 per year—the cost of a single lunch each month.

That's hardly enough to get the federal government out from under $22 trillion in debt. The CBO projects that if current policies stay in place, the government will add another $11.6 trillion to the deficit over the next decade. By 2049, the national debt will be more than one and a half times the size of the entire U.S. economy, breaking a record set during World War II. If a recession hits, those numbers could be worse. 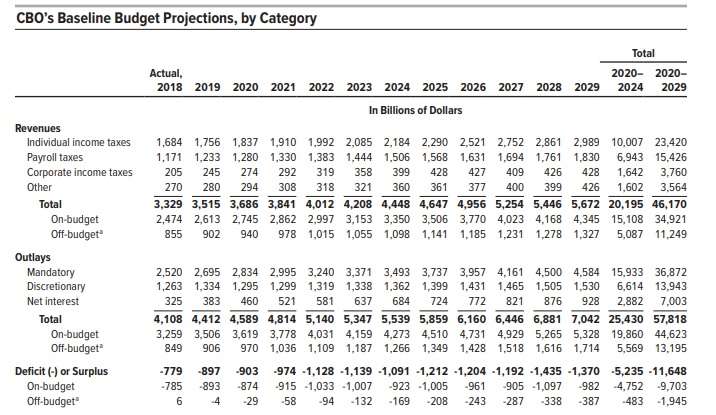 "It's hard to believe there is resistance to finding just $150 billion of offsets over the next decade," comments Maya MacGuineas, president of the Committee for a Responsible Federal Budget. "If Congressional leaders don't like the options suggested by the administration, they should propose alternatives and additions."

MacGuineas points out that $150 billion isn't enough to cover the expected cost of raising the budget caps—meaning that whatever Congress passes next week is almost guaranteed to add to the deficit.

Not that Congress seems to care. There's no political appetite for cutting spending or balancing the budget right now. That's true for both Democrats and Republicans. The latter have finally started admitting publicly that they don't care about deficits anymore, while the former are increasingly pushing for new entitlements that will only make existing budgetary problems worse.

But if Congress and the White House can't agree to cut a relative pittance, there's practically no hope that our elected officials will meaningfully address the debt crisis barrelling our way.