As Politics Get Shaken Up, a Peace Coalition Emerges

It's refreshing to see many conservatives abandon their kneejerk support for militarism, and nice to watch Joe Biden be held accountable for his support for the Iraq blunder. 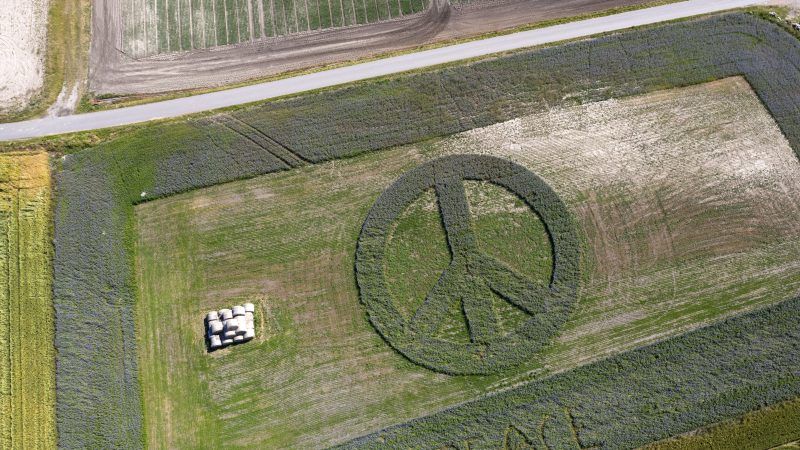 After the U.S. invasion of Iraq in 2003 turned into a mess that led to an immense loss of life and years of violent havoc in the Middle East, the war's backers flippantly declared that "everyone" agreed on the war. The invasion's evolving justifications—Saddam's supposed amassing of "weapons of mass destruction" to his alleged ties to Al-Qaeda—were overblown, but if everyone was in agreement then who could possibly second-guess the military effort?

At the Editorial Board of the Orange County Register, we produced one piece after another questioning the war. We even got in a spat with one Fox News personality, who took umbrage at criticism of the war while the fighting was going on. That was somehow unpatriotic. But the United States has been involved in endless conflicts. If Americans held their tongues while bombs are dropping, then when could they ever feel free to air their concerns?

"There is no real threat to the United States, only a theoretical one based on faulty premises," I opined at the time. "It is unjust, in that it is not a war of last resort. It will run up tens of billions of dollars in costs, and it will lead to the limiting of civil liberties at home. Furthermore, America will be managing Iraq for years, perhaps decades, and our presence there is more likely to destabilize than democratize the region."

Those points largely were correct. (This column isn't about "I told you so," by the way, but about "look how far we've come.") Even the current GOP president has lamented that war. When Donald Trump recently called off airstrikes on Iran at the last minute, almost everyone expressed relief. It's a new world ideologically and our long-standing foreign policy consensus is, finally, up for debate again. It's taken long enough, but better late than never.

Many of us have serious concerns about our increasingly fractious political discourse, but it's great that old coalitions are falling apart, new ideas are flourishing, and we're seeing a rethinking of age-old international policies that have been off-limits to debate. It's refreshing to see many conservatives abandon their kneejerk support for militarism—and nice to watch a prominent Democratic presidential candidate, former Sen. Joe Biden, held accountable for his support for the Iraq blunder.

One recent Boston Globe column highlights how much the ground has shifted. Both sides have their billionaire bogeymen. Conservatives dislike George Soros and liberals dislike the Koch brothers. But Soros and the Kochs are "uniting to revive the fading vision of a peaceable United States," according to the article. They are working to end our "forever war" policies and "promote an approach to the world based on diplomacy and restraint rather than threats, sanctions, and bombing." Bring it on.

The founding fathers were skeptical of empire. In his oft-quoted farewell address, George Washington warned against "the necessity of those overgrown military establishments which, under any form of government, are inauspicious to liberty, and which are to be regarded as particularly hostile to republican liberty." This has been a constant thread even in modern times. We all know that President Dwight D. Eisenhower, a celebrated general, warned about the "military-industrial complex."

During World War I—another costly, unnecessary conflict that led to horrific unforeseen consequences—progressive writer Randolph Bourne warned that "war is the health of the state." Indeed it is. During wartime, the public becomes part of "the herd," he wrote. It is reluctant to criticize its own government, which always is the main threat to our liberties.

These days, many of Trump's supporters are paleo-conservatives, who have always looked askance at military adventurism. Presidential candidate Tulsi Gabbard, a member of Congress from Hawaii who served in the U.S. military in the Middle East and is a major in the Army National Guard, has been the most thoughtful Democrat on the subject.

She complained to National Public Radio about "leaders in this country from both political parties looking around the world and picking and choosing which bad dictator they want to overthrow." She opposes "sending our military into harm's way and then trying to export some American model of democracy that may or may not be welcome by the people in those countries."

These are unusual political times. We've got many evangelical Christians celebrating the "miracle" of a president who, let's just say, has a spotty moral background. We've got "limited government" conservatives championing government control of the economy through tariffs and "big government" Democrats espousing free trade. And yikes—we're even debating socialism again.

But the good news is things have gotten weird enough that Americans appear ready to consider a foreign policy based on peace and diplomacy. I didn't believe that was possible in 2003 when the United States was invading Iraq, but it's possible now—and that's heartening even if everyone isn't on board with it yet.