The retired Supreme Court justice has died at 99. 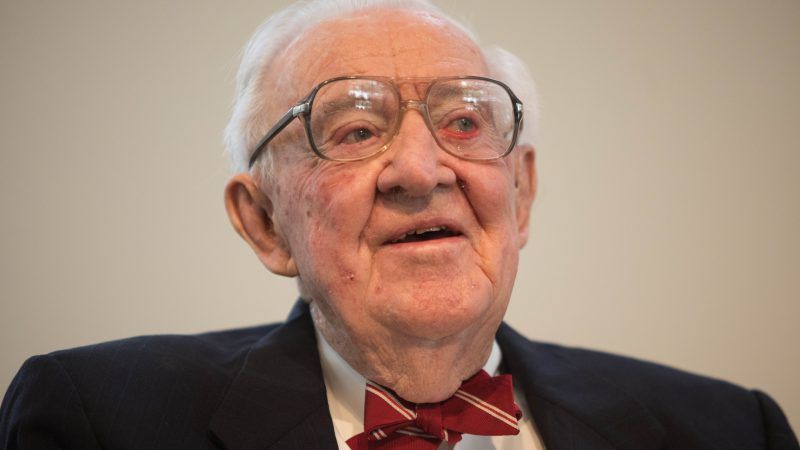 John Paul Stevens, the liberal justice who spent 35 years on the U.S. Supreme Court before retiring in 2010, has died at the age of 99.

Appointed by President Gerald Ford, Stevens played a central role in some of the biggest legal conflicts of the past four decades, from the clashes over gun control and eminent domain to the battles over free speech and medical marijuana. Unfortunately, he had a tendency to vote against the constitutional protections spelled out in the Bill of Rights.

Take the First Amendment. In Texas v. Johnson (1989), the Supreme Court held that burning the American flag in protest is a constitutionally protected form of free expression. The "bedrock principle underlying the First Amendment," declared the majority opinion of Justice William Brennan, is that "government may not prohibit the expression of an idea simply because society finds the idea itself offensive or disagreeable."

Stevens disagreed. Outlawing "the public desecration of the flag," Stevens argued in dissent, amounts to little more than a "trivial burden on free expression." He maintained that a ban on flag-burning easily passed constitutional muster.

And that was not the only form of political expression that Stevens was willing to ban. In his 2011 book, Five Chiefs: A Supreme Court Memoir, Stevens wrote that if he had not retired in 2010, he would have gladly joined Justice Samuel Alito's lone dissent in Snyder v. Phelps, the case in which the Supreme Court upheld the right of Westboro Baptist Church members to stage noisy and offensive protests outside of military funerals. According to the 8-1 majority opinion of Chief Justice John Roberts, "such speech cannot be restricted simply because it is upsetting or arouses contempt."

Stevens, like Alito, favored a more censorial approach. "The hate speech during the funeral" was rightfully prohibited, Stevens wrote, because "the speakers intended to use their speech to cause severe harm to a grieving family during a funeral."

Stevens had an equally deficient view of the Second Amendment. Dissenting in District of Columbia v. Heller (2008), in which the Supreme Court recognized the Second Amendment as securing an individual right to keep and bear arms for self-defense, Stevens asserted that the amendment should offer no protection whatsoever for what he called the "right to possess and use guns for nonmilitary purposes like hunting." In other words, unlike most advocates of gun control, who typically concede that hunters should still have the constitutional right to own at least some weapons, Stevens' view of the Second Amendment did not even recognize that longstanding aspect of civilian gun possession.

Stevens' most controversial opinion is perhaps his 2005 ruling in Kelo v. City of New London, which allowed a municipal government to bulldoze a working-class neighborhood and then hand the land over to a private developer. The Fifth Amendment requires that any taking of private property by the government be for "public use." But Stevens' Kelo opinion rested on the more lenient requirement of a "public purpose."

In response to criticism from myself and others, Stevens later defended Kelo on the grounds that it "adhered to the doctrine of judicial restraint" and was rooted in "Justice Oliver Wendell Holmes' broad reading of the text of the Constitution—which allows the states the same broad discretion in making takings decisions that they possess when engaging in other forms of economic regulation."

Running a close second in controversy was Stevens' 2005 ruling in Gonzales v. Raich, which upheld the federal ban on medical marijuana even as applied to local medical marijuana patients whose use was perfectly legal under state law. The Controlled Substances Act "is a valid exercise of federal power," Stevens held, "even as applied to the troubling facts of this case."

Some Supreme Court justices serve for decades without ever really having any impact on the law. But that cannot be said about John Paul Stevens, who undeniably left his mark. His long, impressive record will be studied by judges, lawyers, scholars, and students for many years to come. Regrettably, that record includes a number of opinions that truly shortchanged the Bill of Rights.