Soybean exports to China have fallen by 74 percent in the past year. 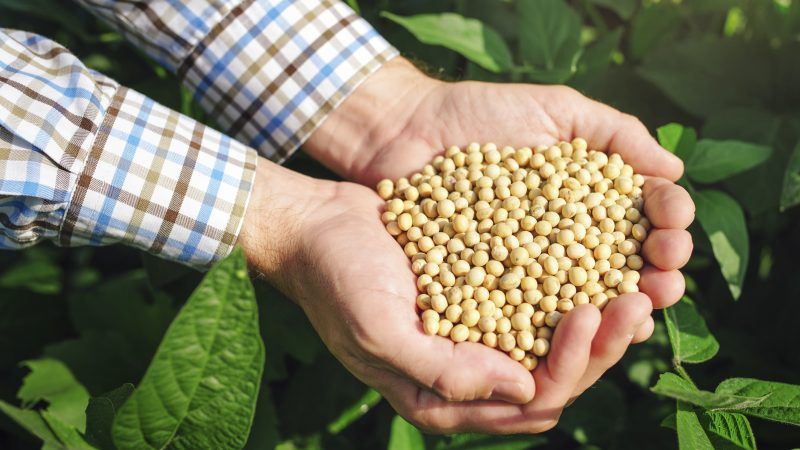 President Donald Trump often tweets about the "patriot farmers" on the front lines of his trade war with China. Those farmers, meanwhile, have been conducting trade diplomacy.

"We must have this market," Derek Haigwood, an Arkansas farmer and chairman of the U.S. Soybean Export Council, told The Wall Street Journal. "You can't produce another China, at least not overnight."

Haigwood was part of a group of American agricultural business leaders who visited China in April. The group's goal was to keep up good relations with Chinese importers even as the two governments remain entrenched in a trade war. Despite some positive signs in recent weeks—Trump postponed plans to hit Chinese imports with more tariffs, and the two sides have agreed to restart talks—meetings between Trump and Chinese President Xi Jingpin at last week's G-20 conference did not produce a deal, and China's retaliatory tariffs on American agricultural goods remain in place.

In 2016, China imported a record 36 million metric tons of soybeans from the U.S. Last year, it bought just 8.3 million metric tons of the crop. Before the trade war started, about 40 percent of all American-grown soybeans were exported to China. The loss of that export market has caused a glut of supply, leading prices to fall by as much as 25 percent.

The U.S.'s loss has largely been Brazil's gain. The South American country's portion of world soybean exports is expected to hit 52 percent this year, the Journal reports.

As I wrote last month, the biggest concern for soybean farmers across the country is the unknown long-term consequences of the trade war. Will the massive Chinese market for soybeans be there if and when the tariffs are lifted in a year, or two, or five? Or will China keep buying Brazilian soy instead?

"The soybean market in China took us more than 40 years to build," Davie Stephens, a soybean farmer from Kentucky and president of the American Soy Association, said in a press release. "As this confrontation continues, it will become increasingly difficult to recover."

Groups like the Soybean Export Council are now trying to open other foreign markets to American-grown soybeans to make up for the loss of sales in China. But it's virtually impossible to do that. Even if European consumers were to double their soybean purchases from American growers, that would amount to less than half of the Chinese market. Clearly, restoring stable trade with China is critical for American farmers.

The fact that trade associations are continuing to talk with Chinese importers is instructive. Trump often tries to portray global trade on the most macro of levels, as if America and China were each a singular corporate entity. But the reality is that trade happens on a smaller scale, with soybeans passing from farmers to wholesalers to exporters to importers because each exchange is mutually beneficial to the individuals involved. Keeping those channels of communication open, as Haigwood and the others know, is essential if there's ever to be a return to normalcy.