It's Donald Trump's America, We Just Live in It. Or Is It?

The president's seeming ability to always get what he wants masks the reality that anything is possible in today's political and cultural landscape. 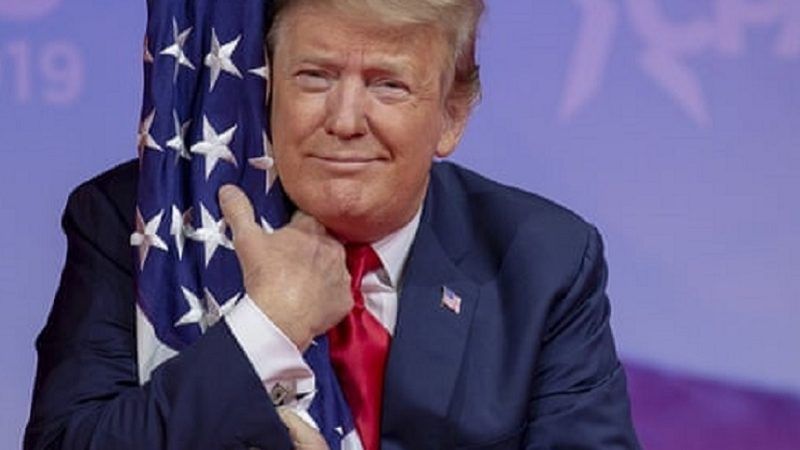 Tomorrow's "Salute To America" seemingly lays bare a fact that many of us have been struggling to avoid since January 2017: It's Donald Trump's world, we just live in it. In many things, it seems as if the president always eventually gets his way—or some reasonable facsimile of it. How you feel about that will depend on whether you're a MAGA-loving deplorable, a member of The Resistance, or a conscientious objector from The War To Politicize Everything (the fight over Nike's Betsy Ross sneakers is the most recent clash in this pathetic conflict), but there's an equally important corollary we should all also never forget: In Donald Trump's America, all things are possible, including successfully opposing Donald Trump.

Tomorrow's display of military might on the National Mall is an example of the president's ability to eventually get what he wants. The event will feature tanks, flyovers by Air Force One and the Blue Angels, military bands up the wazoo, top brass attendees from the Army, Navy, Air Force, and Marines, and a speech by the president. Trump reportedly got the hots to have a military parade after witnessing a Bastille Day celebration in France in 2017. His plans for a Veteran's Day parade in 2018 were shot down after the Department of Defense estimated the price tag at $92 million, or about $80 million more than originally planned. Tomorrow's event will certainly cost less than that, but will likely cost at least $10 million, and that's not including costs related to a shutdown of Reagan National Airport due to all those flyovers (administration officials are refusing to say how much they expect the event to cost).

The urge to condemn the event as profoundly un-American, as Democratic candidate Marianne Williamson has done, is understandable but ultimately misplaced.

When I was a child, we saw pictures of military parades in the Soviet Union. We were told we don't do that, that we're proud of the fact that we don't do that because we don't wish to be a militarized society. Celebrating July 4 with army tanks on the National Mall is repugnant.

It's indisputable, I think, that such displays cut against the American grain. Our Fourth of July celebrations are more likely to include fire trucks than tanks, and that speaks to a commendable, peace-loving part of our national character.

But in the end, the Salute To America is small beer and getting bent out of shape over Trump's vanity production on the Mall obscures the ways in which he routinely loses political and cultural battles. Just yesterday, for instance, the Department of Justice announced that it was dropping its attempt to include a contentious question about citizenship in the 2020 Census. That reversal came after the Supreme Court ruled against the administration last week.

The president also just signed a bill that spends $4.6 billion to address humanitarian and other concerns on the border between the United States and Mexico. While the law frustrated progressives who felt it didn't adequately address policies related to the detention of children, it more significantly didn't include any funding for Trump's signature border wall.

That he signed it is an indication that the president, like his predecessors, knows the limits of his ability to do whatever he wants (despite his bravado, last fall's midterm elections drove home that point with even more clarity). The larger question of immigration shows Trump is losing cultural battles as well. Even as the president and his allies are working to reduce legal immigration, record levels of Americans are pro-immigrant and immigration, with "two-thirds of Republicans, 75 percent of all adults, and 85 percent of Democrats now agree[ing] with the statement that 'immigration is a good thing' for the country today."

Indeed, for all the continuing fears about the president's "norm-shattering brazenness," it's worth noting that the current moment is one in which all sorts of things are up for grabs. That Donald Trump is president is a sign of this, and so are discussions about the meaning and benefits of socialism that would have been unthinkable even a decade or so ago. There are many reasons to worry that we are sliding toward an authoritarian moment, but it's equally true that whole new alliances—such as the one between George Soros and the Koch brothers helping to fund a non-interventionist think tank—are busting out all over the place.

It turns out that the very forces that made Donald Trump possible make all sorts of other things possible, too. That's something worth celebrating this Fourth of July.