Massachusetts Lawmakers Want To Crack Down on Beer Gardens 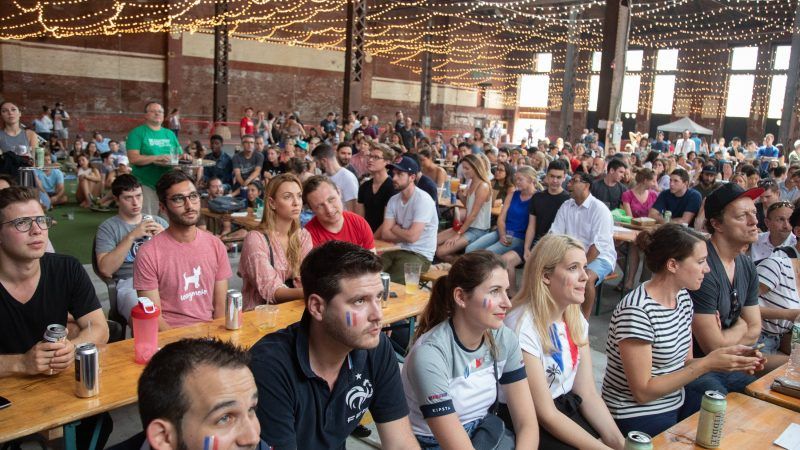 Boston's beloved beer gardens are in jeopardy thanks to a bill introduced by Massachusetts lawmakers earlier this year. The bill, An Act Relative to One Day Alcoholic Beverage Licenses, would curtail (and perhaps derail) the ability of many breweries to operate beer gardens in the state.

"Pop-up beer gardens have been flourishing in Boston," noted American Craft Beer earlier this year. "But now the restaurant lobby is working with politicians to put the squeeze on them."

Boy, are they. In fact, the licensing bill was written by Bob Luz, the president and CEO of the Massachusetts Restaurant Association.

The restaurant association is particularly opposed to the comparatively low cost of beer garden licenses—which run under $100 per day—and by the ease with which breweries currently may skirt a frivolous cap on the number of such licenses that can be issued to a business: "[B]reweries and others can skirt that provision by simply having different employees apply for the permits," Boston.com reported this week.

A Boston magazine feature this spring lamented the fact that restaurants are "waging war" on beer gardens in the state and seeking "to regulate [them] into oblivion."

"For the past year, Boston's restaurateurs have been seething with envy as beer-garden mania has rapidly taken hold, and they're now preparing to wage war," the magazine reports. "At the State House, the restaurant industry is backing a proposed limit on one-day licenses for outdoor drinking to 14 a year per company, which would close a loophole that allows permitted beer-garden operators to stay open all summer long."

According to Boston.com, the city currently boasts nine beer gardens, with about the same number operating outside the city. This summer has also seen the debut of the first wine garden in the city.

The draw of a beer garden is obvious. Drinking outside is the best thing about both drinking and being outdoors. Beer gardens are fun. A typical pop-up beer garden might run several nights each week, and feature games, music, food trucks, and—of course—beer. They're a great use of underutilized space. Beer gardens typically pop up in a vacant lot or a strip of public park. Many are family friendly. Kids and pets are often welcome. Others have embraced high culture. Tree House Brewing, the top-rated brewery in Massachusetts, is featuring musicians from the famed Berklee College of Music at its beer garden.

Beer gardens aren't just good for drinkers. They're good for Boston itself. The Boston magazine piece notes that they generate revenue for the city's parks department and are "doing wonders for our city's stodgy reputation."

But the stodgy restaurant association says restaurateurs spend hundreds of thousands of dollars for alcohol licenses, and that beer gardens—what with their cheap licenses and low overhead—enjoy an unfair competitive advantage.

Yet the restaurateurs complaining about an uneven playing field don't appear even to be interested in taking the field. After all, restaurants are free to apply for the same one-day beer garden licenses they're moaning about breweries using.

(Well, this is the same Massachusetts Restaurant Association, after all, that's a longtime opponent of lifting the state's ridiculous ban on happy hour drink specials.)

State Sen. Nick Collins, who co-sponsored the bill to kill beer gardens, says he introduced it to "jump-start a conversation about [beer gardens'] long term sustainability."

I'd hope Sen. Collins, a lawmaker, would know the difference between legislation and conversation. I encourage Sen. Collins and his co-sponsor, State Sen. Ed Kennedy, to "jump-start a conversation" with one another about what appears to be the only real obstacle to the "long term sustainability" of beer gardens in Massachusetts: lawmakers.

If there are problems with booze laws in Massachusetts, the state has only its lawmakers (certainly not just Sen. Kennedy or Sen. Collins) to blame. If seasonal liquor licenses sound like a solution, it's one that lawmakers have foreclosed upon. As WGBH reported this spring, "seasonal liquor licenses aren't available in Boston, thanks to a decades-old state law that bans the city from issuing them."

Boston Mayor Marty Walsh, very much to his credit, has taken a firm stand against any beer garden crackdown. Walsh also wants more liquor licensees in the city.

In the aforementioned Boston magazine piece, staff writer Spencer Buell closes with a stern warning against cracking down on beer gardens. Instead, he writes, the state should look to reform the alcohol licensing process for restaurants.

He's right. When innovators help expose the inanity and uselessness of a set of regulations, the solution isn't to subject more businesses to the bad rules but to scrap them altogether.

This echoes a suggestion I made in Reason in 2011, when restaurant associations were (more) busily trying to force cities to stifle completion from mobile food trucks.

"Instead of cracking down on the successful food trucks," I wrote, "[cities] should look to those businesses' success as a reason to cut the red tape that engulfs entrepreneurs who want to launch brick-and-mortar restaurants."

If lawmakers really want a conversation starter, they can start right there.