Kamala Harris Won the Democratic Debate by Fudging Her Record

Plus: Inter-generational warfare among Democrats, the reluctant anarchism of Marianne Williams, and more... 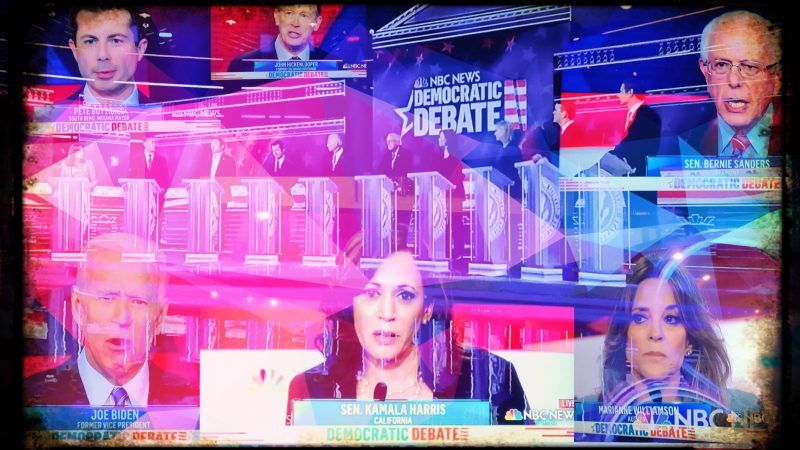 The chattering classes have crowned Kamala Harris the winner of Thursday night's Democratic presidential primary debate. As is so often the case with the senator from California and former top cop for that state, Harris earned her positive press with whoppers and attack lines carefully calculated for viral marketing potential. She may indeed have what it takes to be a winner—so did Donald Trump, whose propensity for bold and easily disproved falsehoods is also a hallmark Harris trait.

What did Harris fudge the truth about? Let's start with the big ones.

Harris told viewers that she disagreed with President Obama's policy of informing Immigration and Customs Enforcement (ICE) when undocumented immigrants were arrested for state or local crimes. But "as district attorney of San Francisco, Kamala Harris supported a city policy that required law enforcement to turn over undocumented juvenile immigrants to federal immigration authorities if they were arrested and suspected of committing a felony, regardless of whether they were actually convicted of a crime," CNN notes.

Another whopper: Harris claimed last night to have been one of the earliest and biggest proponents of police-worn body cameras. But as recently as 2015, she was arguing against making it California's official statewide policy. "I as a general matter believe that we should invest in the ability of law enforcement leaders in specific regions and with their departments to use … discretion to figure out what technology they are going to adopt based on needs that they have and resources that they have," Harris said at the time.

She told debate viewers that as attorney general, she had required "that all my special agents would wear body cameras." That's true—Harris did require it of the small set of officers working directly for her, but not for officers statewide.

Asked about the economy, Harris implied that low unemployment numbers in America are simply a reflection of poor people having to work two or three jobs just to get by. But that's not how the employment numbers work. And as The Washington Post points out, "there are 7.8 million people who hold more than one job right now, just 5 percent of Americans with jobs. The percentage has been roughly steady since the Great Recession, and in fact is lower than in the mid-1990s, when it hovered around 6 percent."

In addition to these direct misrepresentations, Harris also made comments with at least a fuzzy relationship to reality.

Harris spoke at one point of wanting rape victims to be able to run out into the street, flag down a cop, and be taken seriously and treated with respect. But when one underage girl in California did pretty much just that—running into an officer from Alameda County (Harris' old prosecutorial stomping grounds) as she was fleeing a violent pimp—that cop instead started a sexual relationship with the girl and, later, so did several of his colleagues, while others helped cover these relationships up. When the young woman finally came forward, her lawyers begged Harris's office to intervene and conduct an independent investigation into the Oakland Police Department. No dice. Harris was busy bringing charges against the website Backpage—charges she knew were barred by federal law (thanks, Section 230!)—and running a campaign for the U.S. Senate.

(Speaking of Backpage, check out this excellent new ReasonTV piece on the government's war against the website, its founders, and sex workers at large, if you haven't already. Harris makes plenty of villainous appearances alongside her many Republican counterparts in this tale.)

Aside from a Trump-like propensity for twisting the truth, Harris also shares the current president's hunger (and that of his predecessor) for executive power. Last night, and throughout her campaign, Harris has promised to override Congress and use executive orders to pass essentially any policy she wants.

Harris' most talked-about moment of the debate last night was her argument with Biden over his erstwhile opposition to a federally mandated, nationwide busing program to help racially integrate public schools. Biden worked "to oppose busing, and there was a little girl in California who was part of the second class to integrate her public schools and she was bused to school every day, and that little girl was me," said Harris—and lo and behold, her campaign was already selling t-shirts with that slogan by the end of the night.

Having previously opposed abolishing private health insurance, last night Harris was an enthusiastic champion of such plans. "In a January CNN town hall, Harris said she supported the measure, then walked those comments back almost immediately after," Reason's Billy Binion noted. At last night's debate, however, Harris was "one of two candidates to raise their hands when asked by moderators if they would eradicate all private insurance companies."

Asked how she would pay for all these programs, Harris was evasive, saying that no one asked Republicans that. (Oh, yeah?)

Of course, Harris was far from the only one to stink up the stage last night. Check out more Reason coverage of the second Democratic debate night below:

All 10 Dems say their health care plans would cover undocumented immigrants. I'm *incredibly* pro-immigration, but this is how you get a second Donald Trump term.

The most searched Democratic candidates after #DemDebate2, Via @GoogleTrends. pic.twitter.com/HTe2vKFNmf

Hickenlooper: "you don't need big government to do big things"

.@Hickenlooper you don't get to take credit for marijuana legalization, which you opposed. The people did that without you. #DemDebate