Tulsi Gabbard's defense of non-interventionism was electrifying. Tonight's fight between Biden and Sanders over capitalism and socialism will be, too. 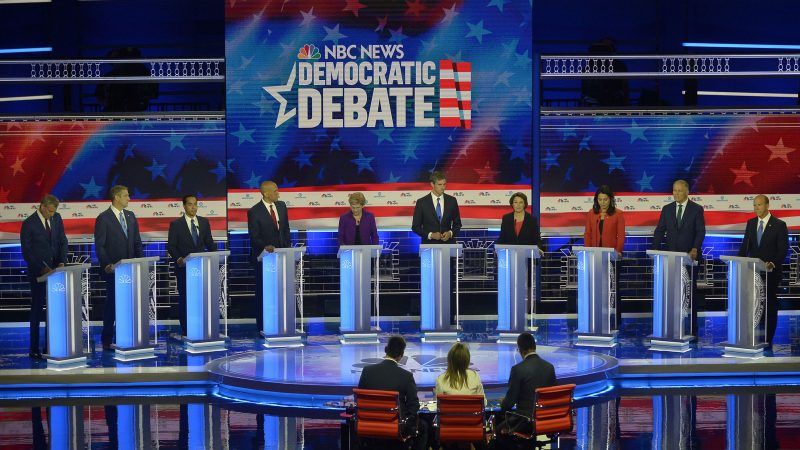 Of all people, it was the joke candidate—Bill de Blasio, the widely hated mayor of New York City who is currently polling far south of 1 percent—who nailed why last night's Democratic debate was an important event, as is tonight's second installment. Yes, per President Donald Trump, last night's debate might have been "boring," but that doesn't mean it didn't matter. "What we're hearing here already in the first round of questions," said de Blasio, is a "battle for the heart and soul of our party."

Within the Democratic Party, that struggle is taking place around two large issues, foreign policy and economics. Last night, Rep. Tulsi Gabbard of Hawaii forcefully engaged the former topic when she ignored a question about gender disparities in wages and ripped U.S. military adventurism instead:

[Moderator Lester Holt]: All right, thank you. I want to put the same question to Congresswoman Gabbard. Your thoughts on equal pay?

Rep. Tulsi Gabbard (D–Hawaii): First of all, let's recognize the situation we're in, that the American people deserve a president who will put your interests ahead of the rich and powerful. That's not what we have right now.

I enlisted in the Army National Guard after the Al Qaeda terror attacks on 9/11 so I could go after those who had attacked us on that day. I still serve as a major. I served over 16 years, deployed twice to the Middle East, and in Congress served on the Foreign Affairs and Armed Services Affairs for over six years.

I know the importance of our national security, as well as the terribly high cost of war. And for too long, our leaders have failed us, taking us from one regime change war to the next, leading us into a new cold war and arms race, costing us trillions of our hard-earned taxpayer dollars and countless lives.

This insanity must end. As president, I will take your hard-earned taxpayer dollars and instead invest those dollars into serving your needs, things like health care, a green economy, good-paying jobs, protecting our environment, and so much more.

As Reason's Christian Britschgi has written, Gabbard "has made ending American intervention abroad the defining issue of her campaign." This is not a small thing within a Democratic Party that has helped drive ruinous foreign policy for the entirety of the 21st century. In contemporary politics, there's a sense that Republicans are the party of the military-industrial complex. But that's simply wrong, or at least incomplete, as Democrats have long been a party of hawks, ever-increasing defense spending, and interventionism. Certainly, the Democrats are as responsible as the Republicans for the current desultory state of U.S. foreign policy.

In 1976, the Republican vice-presidential candidate, Sen. Bob Dole of Kansas, notoriously inveighed against "Democrat wars" in a campaign debate with his opponent, Sen. Walter Mondale. "If we added up the killed and wounded in Democrat wars in this century," said the permanently injured World War II vet, "it would be…enough to fill the city of Detroit." Dole tried to walk the comment back, but his meaning was clear: Democratic presidents led us into World War I, World War II, Korea, and Vietnam. In 1960, John Kennedy argued that his opponent Richard Nixon had been part of an administration that was weak on Communism and had allowed a dangerous (and non-existent) "missile gap" to build up between the Soviet Union and the U.S. In 1972, George McGovern ran on an explicitly dove-ish platform that called for the withdrawal of troops from Vietnam and elsewhere ("Come home, America," was one of his campaign slogans), but he was an odd duck in his own party. Bill Clinton was a thoroughly interventionist president and he and Vice President Al Gore made it official U.S. policy that Saddam Hussein should be deposed.

In the 21st century, large numbers of Democrats in Congress readily signed on to everything the Bush administration wanted to do, and despite winning a Nobel Peace Prize early in his tenure, President Barack Obama could never be confused with a peacenik given his legacy of "endless war." The 2016 Democratic presidential candidate, Hillary Clinton never saw

an opportunity for American military intervention she didn't like. As Secretary of State she was the most enthusiastic of all of Obama's senior civilian advisors about the plan for a surge of troops into Afghanistan in 2009, and in 2011 she led the "humanitarian interventionists" in the administration who persuaded Obama to bomb Libya. In his comprehensive review of her work in the Obama administration, James Traub of Foreign Policy concludes that "at bottom, Clinton was a reflexive advocate of the military."

In such a context, Tulsi Gabbard's explicit non-interventionism and critique of the military-industrial complex is vitally important, both within and without the Democratic Party. Not only is her foreign policy broadly supported by the American people (majorities of whom also see the occupations of Afghanistan and Iraq as mistakes), but it resonates with critiques voiced by Republicans such as Sen. Rand Paul of Kentucky, Rep. Justin Amash of Michigan, and even President Donald Trump, who has been less interventionist so far than either George W. Bush or Barack Obama. If Gabbard's foreign policy position becomes the default of the Democratic Party, it would mark a major change within the two-party system and it would also generate broader momentum across the political spectrum for restraint and diplomacy in place of war.

Because of the way the candidates were split up over two nights, Gabbard didn't have the opportunity to spar directly with the most interventionist of all the Democratic hopefuls. Joe Biden isn't just leading the Democratic field, he is its most outspoken advocate of using American military might around the world. But he is also the least progressive of the candidates appearing tonight, which sets up a likely confrontation between him and Bernie Sanders over capitalism vs. socialism.

Of the two dozen Democratic candidates, most have signed on to various new, big-ticket items such as the Green New Deal, Medicare for All, and student-debt relief (for what it's worth, Gabbard is big on all these, plus increased gun control). If these initiatives stop short of putting the means of production in the hands of the state, they nonetheless represent massive increases in the size, scope, and spending of the federal government. Biden and, to a lesser degree South Bend Mayor Pete Buttigieg, represent a counterweight to the Sanders-Elizabeth Warren axis within the party. If tonight's debate has a memorable moment, it will almost certainly be a showdown between Biden and Sanders over how much bigger the government should get in terms of overseeing more aspects of the economy and redistributing money.