The bill would turn law-abiding gun owners into felons for possessing a product that is almost never used in violent crimes. 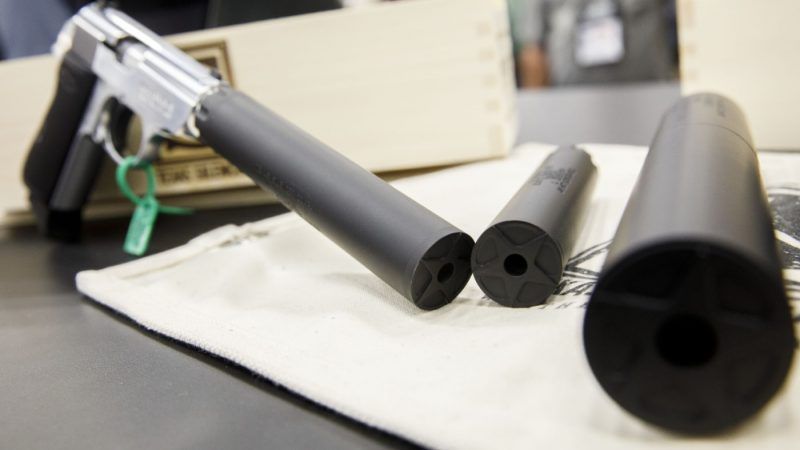 Yesterday Sen. Bob Menendez (D-N.J.) introduced a bill that would ban the importation, sale, manufacture, transfer, or possession of "gun silencers," which he blames for helping the perpetrator of last month's mass shooting in Virginia Beach murder 12 people. "The sound of gunshots is what tells you that your life is [in] danger, and that it's time to run, hide, take cover, call the police and help others save themselves," Menendez says. "At the end of the day if you can hear a weapon you might just save a life."

Contrary to the impression left by TV shows and movies, so-called silencers, a.k.a. suppressors, do not eliminate "the sound of gunshots." On average, they reduce the noise generated by a .45 ACP pistol, the kind used in the Virginia Beach attack, from around 157 decibels to something like 127 decibels, which is still louder than a siren or a thunderclap. It's not surprising, then, that "most law enforcement experts say" the Virginia Beach shooter's suppressor "likely had no bearing on his ability to kill so many people in so little time," as the Associated Press noted.

But Menendez thinks he knows better. "What first sounded like a nail-gun ended up being gunfire," he says, suggesting that some victims might have lived if the sound had been louder. Never mind that there is no evidence to support that supposition, or that people have been known to confuse the sound of unsuppressed gunfire with noises generated by nonthreatening sources such as firecrackers or a car backfiring.

Sen. Richard Blumenthal (D-Conn.), who is cosponsoring Menendez's bill, insists there is no legitimate reason to own a suppressor. "The only people who could reasonably oppose a ban on gun silencers are criminals trying to avoid detection by law enforcement or mass murderers trying to hurt as many people as possible," he says. "Whether a firearm is being used in a mugging or a massacre, the sound of a gunshot is a warning that helps bystanders get to safety and allows law enforcement to track and apprehend the shooter."

Americans legally own about 1.5 million suppressors, which means they live in one of the 42 states where the devices are legal, have paid a $200 transfer tax, and have passed a federal background check that typically takes eight to 10 months. Based on data from the Bureau of Alcohol, Tobacco, Firearms, and Explosives, The Washington Free Beacon's Stephen Gutowski calculates that "roughly .003 percent of silencers are used in crimes each year." Yet according to Blumenthal, every single American who owns a silencer is a criminal.

Why might law-abiding Americans find suppressors useful? As anyone who has visited a gun range can testify, guns are really loud, even when you're wearing ear plugs or muffs. Suppressors provide extra hearing protection, which may be worth the cost and trouble of legally buying them if you shoot frequently, especially if you shoot large-caliber guns. Blumenthal seems to think that explanation is just a cover for criminal activity, which defies logic and math.

Menendez's bill, the Help Empower Americans to Respond (HEAR) Act, would ban not just new sales of suppressors but current possession. Like Donald Trump's extralegal ban on bump stocks, it would transform law-abiding gun owners into felons because they legally acquired a politically disfavored product that is rarely used to commit violent crimes. The text of the bill does not seem to be available yet, but Menendez's summary says it would "authorize a buyback program" and "provide individuals with a 90-day grace period after the date of enactment for individuals to comply with the ban."

Update: The bill is here. People who continue to possess suppressors after the 90-day grace period could be fined up to $250,000 and/or go to prison for up to five years.