Guns Are for Everybody

Like America itself, gun owners are a varied bunch whose politics and experiences don't conform to any narrative. 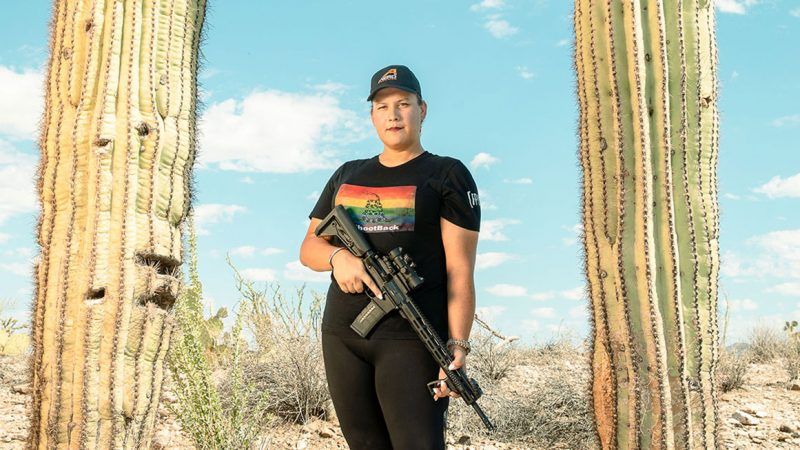 "I first started as a skateboarder, but then I learned about parkour. In parkour there was this whole philosophical movement, no joke, about building yourself as a stronger, better individual. One of the sayings that I think very well displays the philosophy behind pretty much everything I do, it goes like this: To be strong to be useful. To be strong to serve. There was a moment in my life when I decided that I am a person that is for progress—for good and against evil.

"It's not just about being able to run fast, or jump obstacles, or jump from big heights. It's also that sometimes you cannot just run away. Maybe there's someone with you, like your girlfriend or a kid that needs protection, and they cannot run away, because they're not as fast as you. What are you gonna do? You're gonna fight.

"When I started shooting, I thought, Hey, I can handle this. It's a better weapon than my fists. This works on bigger distances, can stop a threat even without actually engaging them—just by showing it—and stuff like that.

"I heard that kung fu should be translated as—how do you say it in English?—'the way of the work,' 'the way of the labor.' Basically it means the way of someone who works hard toward the goal that's maybe not very achievable, but the way itself is the purpose. It's always about getting better. It's always about being safer, being a better person. And really, shooting is just another martial art for me. It's just my kung fu. It is a discipline.

"I know there's a danger always to it. I know sometimes people are not very responsible. But that's the case with really every aspect of life."

"My favorite type of shooting is bench shooting, where you set up your rifle with a bipod or a filled sandbag or something—basically keep it stationary with very fine adjustments while you're holding it—to shoot long ranges. Think, colloquially, sniping. I want a little piece of paper or a small steel gong about 100–500 yards away from me and just put holes in that paper and make the steel ping a lot. For me it's a nice place to focus. To sit, be introspective, almost zen out, get into myself, and just enjoy doing something on my own.

"My first giant sticking point is that everyone says the AR [stands for] 'assault rifle' and the 15 doesn't mean anything. Well, if I hit you with a book, that is an assault book. If I hit you with a car, it's an assault car. Assaulting is simply the matter of attacking somebody. AR is ArmaLite, the company that originally came up with the pattern adapted from Eugene Stoner's M16 military rifle. It is just another rifle. If you put the exact same mechanism into a wooden stock, people go, 'Oh, it's just a hunting rifle. That's fine.' Well, no. It fires the same exact way. It holds just as many bullets."

"It'd be easy for me to be like, 'Oh, nobody needs a concealed-carry [permit],' because I live in this bougie apartment right across the street from the police station that's mostly secure. When I'm walking around there's no danger out here. But for some people, walking from the bus stop to their house is dangerous. I feel like for me to tell them you don't need [a gun] is really just kind of privileged—trying to take my bubble and to project it onto them.

"I realize my views are extremely radical for American politics—I like Marx's view on guns. His language was old-school, and I can't repeat it verbatim, but it was basically: Any attempt to disarm the working-class needs to be obstructed by force. It's always funny when people say the left wants to take away guns. It's like, well, no, it's not the left that wants to take away guns. It's Democrats. And you know, it seems like most anti-gun people are upper-middle-class and usually white, in my experience."

"I've had my [concealed carry permit] for at least four years now. I have owned a gun since I was 16. It's been a part of my life, so much so that as I'm looking for work elsewhere in the country, one of the first things I check is the gun politics in those areas. Can I take my guns with me? Can I bring my firearms?

"It's not like I'm attached to them greatly—I mean, I spent a good deal of money on them, and it's a personal hobby—[but] it boils down to protection. Protection of myself comes second. It's really the protection of my daughter, and making sure that I come home to her alive rather than in a box.

"The best way I describe my stance towards police is: I'll show respect to them, but I won't always trust them to do the right thing.…How this relates to firearms and self-defense is we're really kind of getting to a point where a lot of minorities don't trust police to protect them, so they want to take it into their own hands. That's kind of a sad reality, but it kind of goes back to, 'Don't trust the government.'

"I'm fairly left-leaning, but I think what JFK says: You don't want to do something because it's easy; you want to do it because it's hard. I think the left has the answers to a lot of the problems with guns: health care, helping out the poor with various services, the robust welfare state we've seen in parts of Europe that's worked pretty well. But not with gun control. I think they're just taking the easy way out. They're not taking responsibility and trying to ask the hard questions of, 'Why is there such high crime?' I think I've heard at times, 'Nothing stops a bullet like a job.'"

"I basically think it boils down to two things: First off, I'm not doing anything to harm anybody, so why should somebody else have a right to tell me what I can and can't own? And secondly, by natural law, I should have access to something that will allow me to equalize the playing field when somebody's coming in and trying to rape my wife or abduct my child or burn down my house.

"I literally cannot comprehend the fear and the loathing that people have for what's basically a pile of metal parts screwed together. It's just a thing. It's a tool. It sits there.

"I am married. We just had our sixth anniversary. We have two children, both girls. I hope that they grow up having some of the same appreciations that I do for self-ownership and personal liberty and civil rights. Included in that is I hope that they have an interest in firearms and the Second Amendment, and that they are able to become shooters and enjoy it. If they don't, that's fine. It's their life. But hopefully I can teach them well enough to at least understand why I hold the positions that I do, and even if down the road for some reason they become anti-gun, they can at least understand where pro-gun people are coming from.

"I would say that I am a Quaker with Vedanta leanings, which is sort of a Hinduism thing, who tries to practice Buddhist ethics. Quakers are notorious for being nonviolent people, and I kind of take pride in knowing that I believe in that, but I have guns and I do martial arts. Because while I fundamentally disagree with the idea that you should ever initiate violence on somebody, that same rule applies to other people [as well]. If somebody else is going to initiate violence on a third party…I need to have the capacity to stop that from happening.

"In order to stop a cycle of violence, I need to be willing to interject with violence if it is absolutely necessary."

"I'm trans. I also don't identify as straight. I'm also on the autism spectrum. And I'm disabled. All those things combined, then, I'm not the most popular person in today's world.…I don't want to ever actually have to use them, but I feel better having my concealed carry on me. [My partner Aulani] works overnight, so I'm home a lot with [her daughter], and I can't move that fast. I want to make sure I can keep her safe if I have to.

"The first time we went to the gun show I was super uncomfortable. It's a lot of American flags and a lot of Trump stuff. The second time we went—last weekend, I think—I was a little more comfortable, because people do interact with you. And a lot of times, a lot of these people—even if they already know that we're probably politically different—the fact that we have this thing in common, they'll still be respectful and still have a conversation with you, as long as the conversation stays on guns."

Eric B. Hanson is a photographer, lawyer, and gun owner based in Los Angeles.