Return of the tiresome terror tyke. 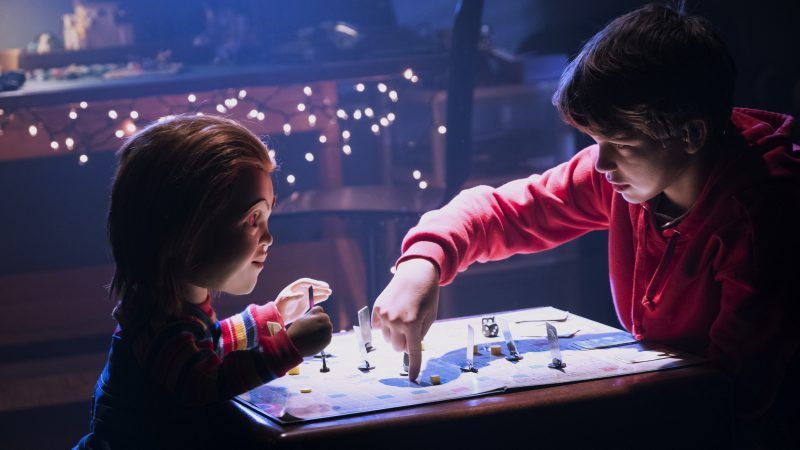 For a guy—well, an evil doll—like Chucky, life has always been nasty and brutish, although never as short as his creator, the writer and sometime-director Don Mancini, has so often made us hope. Over the course of 30 years, seven movies, and endless pandemonium, the pint-size exterminator has been shot, stabbed, beheaded, dismembered, and blown the fuck up, and yet has always lived on to crank out another sequel. The new Child's Play—a not-really remake of the first Chucky film, from 1988—is the latest unnecessary extension of this weary franchise.

The movie is a second feature by Norwegian filmmaker Lars Kleyberg, a man I think might already be wracked with regret. It dispenses with the lovably bizarre humor of the mid-period Chucky movies (Bride of Chucky, Seed of Chucky) and returns us to the straightforward gore and jump-scares of earlier installments. It also discards almost all of the original Child's Play story, starting with the soul-shifting voodoo killer played by Brad Dourif (also the voice of Chucky in every succeeding movie until this one, in which he's been replaced by Mark Hamill—possibly for the sole purpose of slipping in an Ewok visual reference toward the end of the film).

The picture begins with some quick exposition by Henry Kaslan (Tim Matheson), a tech mogul who's touting his latest product, a digital doll called Buddi, which is capable of interfacing with all the other electronic marvels that clutter our lives, from smartphones to Roombas. Cut to Vietnam, where a disgruntled Kaslan employee on the Buddi assembly line flips out and rewires one of the sinister-looking dolls for maximum misbehavior. Next we see an irritated American mother returning this fritzy item to a clerk at the toy mart where she bought it. The clerk, a single mom named Karen Barclay (Aubrey Plaza), takes the doll home to her son, Andy (Gabriel Bateman), who thinks it's creepy. Right here, everybody else in this movie should start listening to Andy. But no.

Okay, you're wondering: Why is the doll called Buddi? It turns out that Mancini originally wanted to call the character Buddy but was prevented from doing so by the fact that Hasbro had a line of similarly clothed but much more wholesome dolls called My Buddy. Since Mancini declined to take part in this one-off remake, it's unclear why the story is suddenly saddled with the odd-looking "Buddi." Especially since, early on in the movie, Buddi simply renames himself Chucky, and that's that.

What else? Well, there's a cat, but don't get attached. And Karen has a jerkweed boyfriend (David Lewis) who thinks the middle of the night is an excellent time to climb a shaky ladder up to the roof to adjust some Christmas lights. And there's a slob janitor who gets off on watching The Texas Chainsaw Massacre 2 in his squalid basement (TCM2 footage presumably being cheaper to license than footage from the original TCM). There's also a prop severed head that can't have burdened the budget too awfully much, and a good actor—Brian Tyree Henry, playing a nice-guy detective—who's surely being held against his will in this movie.

And Chucky? Does he finally die? Well (spoiler) yes and no.