Activists Want a Problematic Mural of George Washington Destroyed. It Will Cost a High School $600,000.

The artist wanted students to learn about Washington's flaws. How traumatizing. 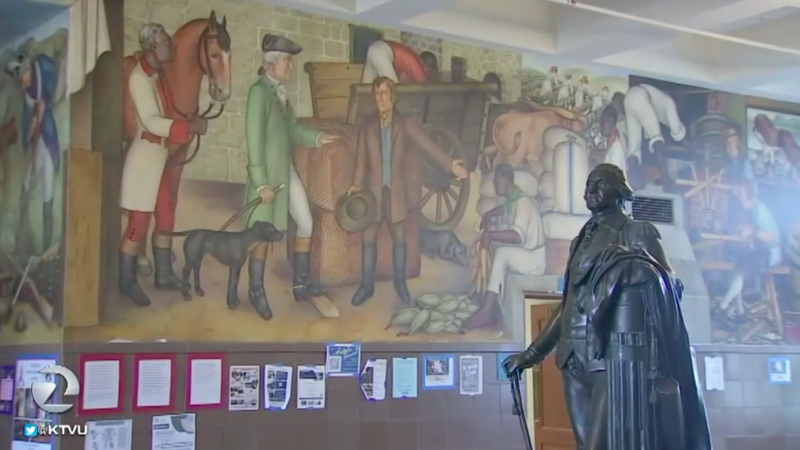 A high school in San Francisco is considering three options for censoring a mural of George Washington deemed problematic by the local activist community: putting up a curtain (price tag: $300,000), painting over it ($600,000), or hiding it behind panels ($875,000).

No doubt San Francisco United School District could hire quite a few teachers in lieu of executing even the cheapest of those plans, but a 13-member working group asserts the mural must go. It "glorifies slavery, genocide, colonization, manifest destiny, white supremacy, oppression," and "doesn't represent SFUSD values of social justice, diversity, united, student-centered." It's also responsible for traumatizing students, according to the activists.

The truth is that George Washington High School's mural is provocative by design. It was painted in 1936 by a Russian-American artist named Victor Arnautoff, who held leftist sympathies. Arnautoff did not wish to blindly celebrate Washington while ignoring the less savory aspects of the American founding, and thus he depicted the first president working his slaves and sending men to confiscate Native American lands. It was an attempt to remind students that history is a lot messier than what they read in class.

"He put those ghastly gray pioneers literally walking over the dead body of an Indian to demonstrate that the settlement of the west was an act of conquest that involved the slaughter of Native Americans," Robert Cherny, a San Francisco State University professor, told the school district's board of education in 2018. "That was a very bold effort on his part to counter the kinds of textbooks that students were seeing."

Modern activist culture, however, is preoccupied with an ever-expanding definition of safety, which now includes emotional safety. To walk past a mural that depicts violence against Native Americans and people of color—even if that's what actually happened—is considered trauma-inducing, and the purpose of education is to mitigate discomfort. (This is a major theme of my new book, Panic Attack: Young Radicals in the Age of Trump, which was released this week and is available in book stores and online.)

"Why do we have to explain the pain caused by the visual offense that we see in that building that is supposed to be an institution for learning?" asked one woman at a public meeting about the issue on Tuesday.

"It's not in a museum, it's inside a school," lamented another speaker, who apparently did not understand the point of a school. "Our students, all of them, deserve better."

Other speakers, several of them Native American, expressed no objection to the mural, correctly pointing out that it was depicting "what actually happened."

According to National Review's James Sutton, most of the students want to keep the mural, or don't really care one way or another. The controversy is the work of "outside busybodies." Naturally, it looks like they are going to get their way. The school board is currently deciding between three different plans, all of which involve destroying the mural, or covering it up. A final decision is expected next week, reports The College Fix.

By the way, if you're wondering why it would cost several hundred thousand dollars to get rid of the mural, here's your answer: Officials are required to conduct environmental impact reports before they take any action.