The video platform temporarily demonetized a conservative comedian's channel, satisfying no one. 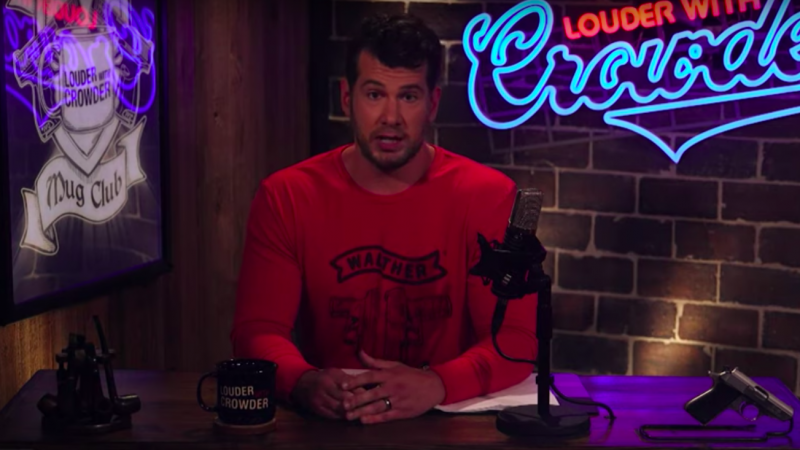 In the last 24 hours, YouTube declined to punish conservative content creator Steven Crowder for homophobic speech directed at a gay Vox journalist, then debuted a far-reaching ban on extremist videos, and then changed its mind about Crowder and temporarily de-monetized his channel.

It was a series of actions that satisfied exactly no one—least of all Carlos Maza, a producer for Vox's Strikethrough video series who contends that YouTube has refused to stop Crowder from harassing him. But the video platform is in a tough position: If it bans Crowder, conservatives will complain that YouTube is out to silence them, but if it leaves his channel intact, liberals will complain that YouTube is turning a blind eye toward abuse. And its broader policy change—a ban on "videos alleging that a group is superior in order to justify discrimination, segregation or exclusion"—is bound to run into problems, since reviewing the nearly 500 new hours of video content that appear on YouTube every single minute is an impossible task.

Indeed, the ban has already ensnared one undeserving account: Ford Fischer, an independent journalist and co-founder of News2Share.com. Fischer covers fringe political events, but he is not himself engaged in the kind of behavior YouTube has declared verboten. Those who support YouTube taking stronger measures to purge fake news and abuse like to imagine that mere algorithmic tweaks can perfectly eliminate the bad actors. But innocent users like Fischer are bound to wind up inadvertently included.

The Crowder case is a bit more complicated. Crowder creates videos in the vein of a conservative provocateur, and uses offensive and profane humor. Maza is one of his favorite targets: Crowder has mocked his race, sexual orientation, and mannerisms so frequently that it borders on obsession.

I have spent two years getting targeted by racist and homophobic abuse from one of @YouTube's star creators.

Crowder has 4 million subscribers, and some of them have harassed Maza—including by texting him over and over again demanding that he debate Crowder. A few days ago, Maza had finally had enough, and called on YouTube to de-platform Crowder. On Tuesday, YouTube declined to do so, reasoning that "while we found language that was clearly hurtful, the videos as posted don't violate our policies."

By Wednesday, YouTube had sort of changed its mind, and it announced that Crowder's channel would be demonetized—meaning it could no longer make money off advertisements—until he deleted a link to a merchandise page allowing fans to buy his "Socialism Is For F*gs" T-shirt. These declarations all came through YouTube's Twitter account: The video giant's decision-making process in this matter was fairly opaque.

Maza was furiously dissatisfied with the outcome, and he tweeted that demonetization isn't a suitable punishment for content creators like Crowder, who make most of their money via other methods.

"Abusers use [demonetization] as proof they're being 'discriminated' against," he wrote on Twitter. "Then they make millions off of selling merch, doing speaking gigs, and getting their followers to support them on Patreon. The ad revenue isn't the problem. It's the platform."

Neither Crowder nor Maza immediately responded to a request for comment. (Maza blocked me on Twitter shortly after I followed him.)

Crowder's comments about Maza were mean-spirited and cruel. But are they actually prohibited? Certain kinds of speech—threats, doxing, imploring followers to mob someone—are rightly prohibited on the platform. Crowder did not dox Maza, and he did not call on his followers to harass him. He didn't threaten him, either.

YouTube's harassment policy, however, also prohibits "Content that is deliberately posted in order to humiliate someone," "content that makes hurtful and negative personal comments/videos about another person," and "maliciously ridiculing or mocking an individual based on their personal characteristics. This includes saying something like 'Look at this creature's teeth, they're so disgusting!'" Calling someone a "lispy queer," as Crowder did, strikes me as something that might be covered under the above, although whether it was "malicious" or "deliberate" is debatable. Crowder has maintained that his remarks were jokes.

The Stranger's Katie Herzog, one of the saner chroniclers of internet culture, writes that while she sympathizes with Maza, "Crowder is a comic, doing exactly what comics do: Mocking a public figure….[If YouTube bans] everyone who mocks people for their sexuality or race, they're going to have to ban a whole lot of queer people of color who enjoy making fun of straight white dudes next. That's not a precedent I'd like to see set." Indeed, basically any video that includes offensive comedy—if directed at a specific person—would theoretically be imperiled.

YouTube, presumably, would never take broad action against all offensive comedy videos—and as long as some remain watchable, it will be possible to accuse the platform of viewpoint discrimination. If Crowder were to lose his channel while any liberal comedian's profanity-laced anti-Trump tirade survived, conservatives would call it hypocrisy. As a private company, YouTube isn't bound by the First Amendment and is well within its rights to apply its rules selectively and arbitrarily—but doing so will only play into the hands of people like Sen. Josh Hawley (R–Mo.), who see all evidence of anti-conservative bias in Big Tech as justification for government involvement.

It's important for libertarians to strongly oppose such calls for regulation, whether or not they spring from legitimate grievances about various tech platforms' policies. As for policing harassment, the plain truth is that it's frustratingly difficult to do so in a manner that seems fair to most everyone. As platforms consider prohibiting broader categories of speech—unlike, say, doxing, which is quite specific and rightly disallowed—they will undoubtedly struggle.