If the tariffs ramp-up all the way to 25 percent, as Trump has threatened, they would be the biggest tax increase since 1968. 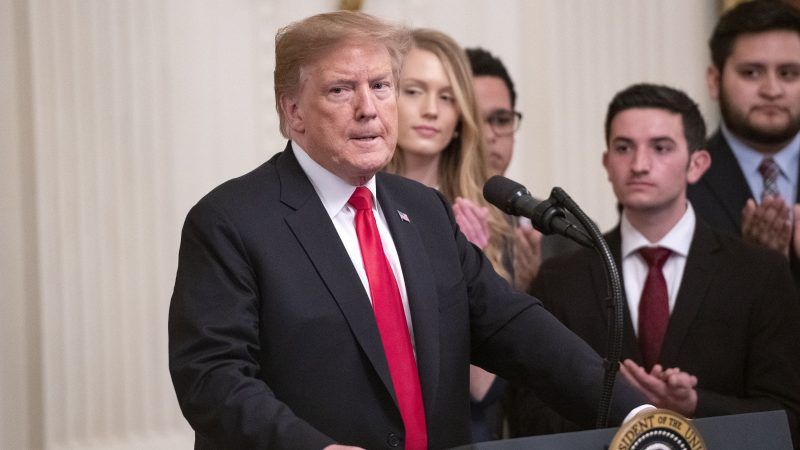 President Donald Trump is about to challenge Bill Clinton and Lyndon Johnson for a record few Republicans would want to achieve.

If Trump follows through with his plan to hit all Mexican imports with tariffs, the 5 percent import taxes scheduled to take effect on June 10 would push the cumulative cost of Trump's trade war ahead of the 1993 tax increase signed by then–President Bill Clinton.

According to an analysis from the Tax Foundation, a nonpartisan think tank, existing tariffs imposed by the Trump administration would generate $69 billion in federal revenue over a full year—equivalent to about 0.32 percent of gross domestic product (GDP). As Axios notes, the hit from new 5 percent tariffs on all Mexican imports would be another $17 billion, or about 0.08 percent of GDP.

The 1993 tax increase, which triggered a Republican takeover of Congress and fueled a decades-long GOP aversion to raising taxes, increased federal revenue by about 0.36 percent of GDP, according to U.S. Treasury data. The only larger tax increase to pass since 1993 was the Affordable Care Act, which hiked taxes by 0.43 percent of GDP—though it did not hit that level until the fourth year after it had been passed (in part because the law was specifically structured to avoid looking like a large tax increase).

The White House has threatened to escalate those tariffs each month unless Mexico takes as-yet-unspecified actions to curb the flow of migrants toward the United States' southern border, with a maximum tariff of 25 percent to be implemented by early October. Trump is "absolutely, deadly serious" about following through with those threatened tariff hikes, White House chief of staff Mick Mulvaney told Fox News on Sunday.

If Trump goes through his with threats to raise tariffs to 25 percent on all Chinese and Mexican imports, the Tax Foundation says, federal tax revenue would increase by $241 billion—about 1.24 percent of GDP.  That would be the biggest tax increase since the Johnson administration, according to Treasury data.

It's not hard to see why tariffs on Mexican imports would be a drag on the American economy. Mexico is the United States' third biggest trading partner, behind only China and Canada. In 2018, the U.S. imported $346.5 billion worth of goods from Mexico. Mexico is the biggest source of agricultural goods into the United States, but it's also a major supplier for other industries.

The automotive sector would likely be hardest hit. Last year, American companies imported more than $115 billion worth of cars and car parts from Mexico. Thanks to decades of mostly tariff-free trade between the two countries, many automakers have supply chains sprawling freely from one side of the Rio Grande to the other. As Bloomberg demonstrated in a useful 2017 infographic, a single car seat might zig-zag across the border several times before being installed in a sedan built in South Carolina or a truck in Michigan.

"The auto sector—and the 10 million American jobs it supports—relies upon the North American supply chain and cross border commerce to remain globally competitive," says David Schwietert, interim president and CEO of the Alliance of Automobile Manufacturers, in a statement about the proposed tariffs. "Any barrier to the flow of commerce across the U.S.-Mexico border will have a cascading effect—harming U.S. consumers, threatening American jobs and investment, curtailing the economic progress that the administration is working to reignite, and potentially stalling efforts to ratify the agreement in Mexico, Canada, and the U.S. Congress."

Those cross-border supply chains have bolstered manufacturing jobs on both sides of the Rio Grande. There's been a 50 percent increase in American automaking jobs since 2011, according to the American Automotive Policy Council. And greater job prospects in Mexico have been credited with slowing illegal immigration, so disrupting U.S.–Mexican trade may well increase the illegal immigration it is supposed to stop.

And it means a huge tax increase for Americans—one that might even make Democratic presidents think twice.