Trump Announces Escalating Tariff Up to 25 Percent on Mexican Goods 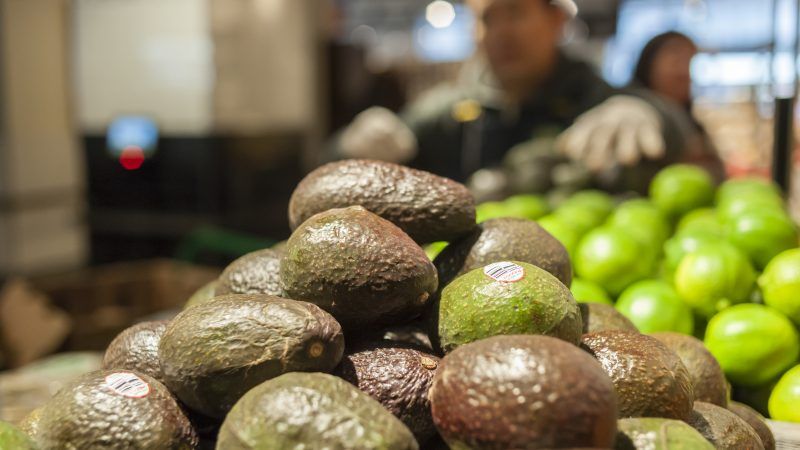 Trump plans to make Americans pay until "illegal migrants coming through Mexico" stop. The president tweeted Thursday night that starting soon, every single item imported from Mexico will be subject to a five percent tariff—a rate that "will gradually increase" until undocumented border crossings end. In August it would rise to 15 percent and then to 25 percent in October. When "the Illegal Immigration problem is remedied," Trump tweeted, "the Tariffs will be removed."

By this morning, stocks are tumbling and pretty much everyone is asking, basically, wtf?

"Trade policy and border security are separate issues. This is a misuse of presidential tariff authority and counter to congressional intent," says Sen. Chuck Grassley (R–Iowa), who chairs the Senate Finance Committee, in a statement.

On June 10th, the United States will impose a 5% Tariff on all goods coming into our Country from Mexico, until such time as illegal migrants coming through Mexico, and into our Country, STOP. The Tariff will gradually increase until the Illegal Immigration problem is remedied,..

In a nutso White House press release, Trump whines that "for years, Mexico has not treated us fairly" and declares we are "now asserting our rights as a sovereign Nation." He continues:

To address the emergency at the Southern Border, I am invoking the authorities granted to me by the International Emergency Economic Powers Act. Accordingly, starting on June 10, 2019, the United States will impose a 5 percent Tariff on all goods imported from Mexico. If the illegal migration crisis is alleviated through effective actions taken by Mexico, to be determined in our sole discretion and judgment, the Tariffs will be removed. If the crisis persists, however, the Tariffs will be raised to 10 percent on July 1, 2019. Similarly, if Mexico still has not taken action to dramatically reduce or eliminate the number of illegal aliens crossing its territory into the United States, Tariffs will be increased to 15 percent on August 1, 2019, to 20 percent on September 1, 2019, and to 25 percent on October 1, 2019. Tariffs will permanently remain at the 25 percent level unless and until Mexico substantially stops the illegal inflow of aliens coming through its territory. Workers who come to our country through the legal admissions process, including those working on farms, ranches, and in other businesses, will be allowed easy passage.

Those are the only real details offered in the 15-paragraph statement, which is mostly the same TV tough-guy caricature meets crime-panic fever dream that the president rambles out on the regular.

But the tariffs would be anything but business as usual, of course. They could "throw into chaos corporate and agricultural supply chains that have essentially worked in a system without tariffs since the 1994 North American Free Trade Agreement," write Washington Post financial reporters David J. Lynch and Kevin Sieff. "Mexico is on track to become the United States' largest trading partner, ahead of China and Canada, according to census data through March."

How many times will Congress let the president unilaterally raise taxes on Americans? All the times. https://t.co/hJtaKly92K

Unlicensed diet tips in court. A federal court will soon address another Institute for Justice suit on licensing laws and free speech. This one centers on Florida nutrition coach Heather Del Castillo. From the AP:

After getting a complaint that she was working without a license, Florida officials sent a cease-and-desist order and fined her $750. Del Castillo sued, saying her free speech rights were violated. Now, a federal court is expected to rule on her lawsuit as other states weigh regulations on professional dietary advice.

The case highlights the confusion around dietitians and health coaches, and how their qualifications differ.

"I literally didn't even know I was doing anything that was wrong," said Del Castillo, who noted her business was legal when she was living in California.

To hire an independent contractor, businesses must prove that the worker (a) is free from the company's control, (b) is doing work that isn't central to the company's business, and (c) has an independent business in that industry. If they don't meet all three of those conditions, then they have to be classified as employees.

This could radically upend so many different industries and businesses. Of course lawmakers are handing out exemptions to those they like:

The state's Chamber of Commerce and dozens of industry groups have been lobbying for exemptions, and a long list of professions were excluded from the bill: doctors, dentists, lawyers, architects, insurance agents, accountants, engineers, financial advisers, real estate agents, and hairstylists who rent booths at salons.

But "Uber and Amazon drivers…manicurists and exotic dancers" and many others that politicians disfavor would be screwed.

Senator @tedcruz has agreed to co-lead a "clean" bill with Rep. @AOC to ban members of Congress from becoming paid lobbyists once they leave Congress. pic.twitter.com/4en9biU2xt