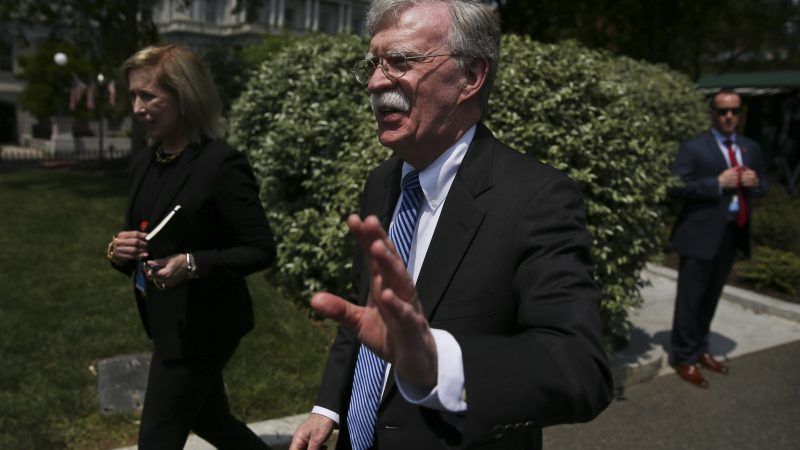 The Trump administration is sending more troops and weapons to the Middle East amidst rising tensions with Iran.

"We are going to be sending a relatively small number of troops, mostly protective," President Donald Trump said to reporters at the White House, according to the Associated Press. "Some very talented people are going to the Middle East right now and we'll see what happens."

The Trump administration also announced today that heightened tensions with Iran constitute a national emergency, thus allowing the administration to approve $8 billion in weapons sales to Saudi Arabia without authorization from Congress.

These moves come after White House officials spent weeks deliberately raising tensions with Iran. Last week, it was reported that Defense Department officials—at the urging of ultra-hawkish National Security Advisor John Bolton—were revising contingency plans to send 120,000 troops to the Middle East in the event Iran attacked U.S. troops in the region or ramped up its nuclear program.

Before that, Bolton, who's long advocated for war with Iran, announced that a U.S. carrier, the Abraham Lincoln, would be heading to the Persian Gulf ahead of schedule to counter a supposed, unspecified heightened danger from Iran.

The aggressive moves taken by the Trump administration provoked condemnation from across the political spectrum.

Sen. Bernie Sanders (I–Vt.) and Rep. Tulsi Gabbard (D–Hawaii) both issued statements on social media warning of the consequences of any war with Iran.

I was right about Vietnam.

I was right about Iraq.

I will do everything in my power to prevent a war with Iran.

I apologize to no one. pic.twitter.com/Lna3oBZMKB

.@POTUS is (again) going around Congress—this time to unilaterally approve billions in arms sales, including to the brutal Saudi regime. Congress must reclaim its powers. When will the legislative branch stand up to the executive branch? https://t.co/OInOaSO0YJ

Interestingly, Sen. Josh Hawley (R–Mo.) sent out a tweet expressing concern over increasing U.S. involvement in the Middle East. China is the real enemy we should be watching, he said.

Have to say I don't understand this. Why is Pentagon recommending sending thousands more troops to region where we already have too many, while the biggest threat to American security is Chinese imperialism? https://t.co/ggrQuM2FK6

The moves made by the White House in recent weeks are all incremental. Back in his private citizen days, Trump himself argued against any war with Iran.

As president, he's occasionally advocated for reducing the U.S.'s presence in the Middle East, although he hasn't followed through on pledges to pull troops out of Afghanistan and Syria.

Nevertheless, the lack of a clear strategy from the Trump administration raises the risks that these incremental moves will spiral into a conflict that no one really wants (except maybe John Bolton).

"I don't believe either side really wants a conflict, but you put this many troops from both sides in a small area and raise tensions like this, there's always the risk that something happens accidentally that spirals into a larger conflict," Emily Ashford, a Cato Institute foreign policy scholar, told Reason last week.

To quote Trump, I guess "we'll see what happens."