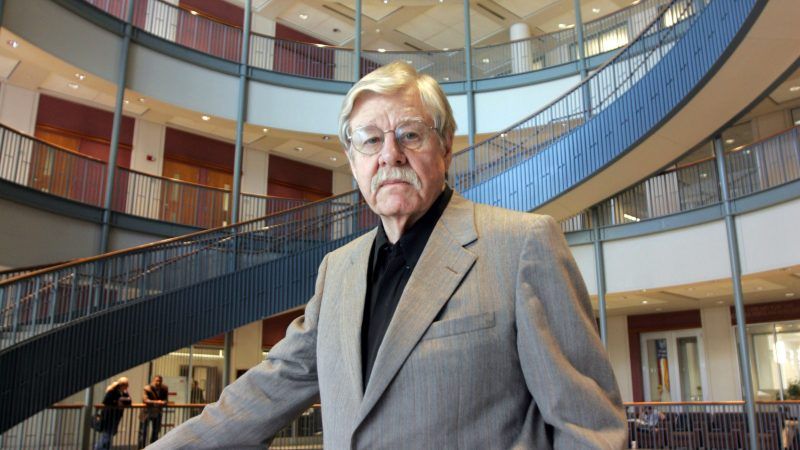 George Kelling, one of the criminologists who introduced the theory of "broken windows" policing and changed the face of law enforcement in several major U.S. cities, died on Wednesday.

Kelling leaves behind an aggressive brand of policing that he eventually complained had morphed into something far beyond what he originally conceptualized. For academic critics, activists, and many of the people subjected to it, "broken windows" became a byword for heavy-handed, racist policing; for supporters it was the force that pulled New York City out of its dark days.

Kelling and co-author James Q. Wilson's basic theory, laid out in a 1982 Atlantic article titled "Broken Windows," argues that putting more beat cops on the street to deter nuisance and "quality of life" crimes—public urination, drunkenness, aggressive panhandling, etc.—will create the social cohesion and order that stops more serious crimes. The theory has the folksy appeal of a truism: If you take care of the little things, the big things will follow.

One problem Kelling and Wilson couldn't solve, although they explicitly warned of it in their original article, was the danger of giving police forces with histories of racism and misconduct the political mandate and discretion to crack down on neighborhoods at will.

"We can offer no wholly satisfactory answer to this important question," Kelling and Wilson wrote. "We are not confident that there is a satisfactory answer except to hope that by their selection, training and supervision, the police will be inculcated with a clear sense of the outer limit of their discretionary authority."

That hope in police departments' benevolent discretion turned out to be fatally misplaced.

Kelling and Wilson's theory was put to the test on the biggest possible stage: New York City, where it is still an article of faith among many of the city's top officials. "I put into practice his theories," former New York City police commissioner Bill Bratton tells The New York Times, "and they worked."

The earliest success for broken windows theory was cleaning up New York City's graffiti-covered subway cars. By meticulously cleaning every car and not allowing new graffiti to linger, the problem, as predicted, soon vanished.

At the same time it adopted broken windows policing in 1994, the New York City Police Department (NYPD) also rolled out its data-driven CompStat reporting system. Numbers became the name of the game. To demonstrate progress (or at least effort), precincts had to show arrests and summons. And to do that, beat cops began to stop, search, and question large numbers of residents—what became infamously known as "stop and frisk."

By 2009, the NYPD was stopping 575,000 people a year—nearly 90 percent black or Latino—and frisking more than half of them. Marijuana arrests skyrocketed from 900 in 1993 to more than 40,000 in 2008. Petty marijuana possession wasn't an arrestable offense in New York City, but cops got around that by ordering stop-and-frisk suspects to empty their pockets. If they revealed any marijuana, the suspects had suddenly violated New York's law against openly displaying weed, an arrestable crime. And into the system they went, another victory for public order.

This emphasis on "making numbers," and the unofficial quota system it created, flooded New York City's misdemeanor courts with shoddy cases that prosecutors had little interest in turning into convictions.

The Yale sociologist Issa Kohler-Hausmann studied this phenomenon in her 2018 book Misdemeanorland, an in-depth look at the operations of New York's lower courts. She found that the rate of misdemeanor convictions in New York City dropped sharply during the era of "broken windows" policing, even as arrests for misdemeanor offenses spiked. The city's misdemeanor courts, she argues, had stopped performing their regular function. Rather than establishing facts and adjudicating guilt, they turned into an elaborate machine that marks, hassles, and monitors offenders—essentially, a system for social control.

Kohler-Hausmann's book describes the failure of New York's broken windows policing on a macro level. If there's one case that exemplifies it on an individual level, it's the 2014 death of Staten Island resident Eric Garner, who died after being placed in a chokehold by an NYPD officer.

Garner was being arrested on suspicion of selling "loosie" cigarettes on the street corner, but according to Matt Taibbi's book on Garner's killing, I Can't Breathe, Garner wasn't even selling loosies when the officers tried to arrest him. They just needed someone to arrest, and Garner, a huge man, was a highly visible target, and one they'd already been harassing for months.

Ah, but crime did go down in New York City, didn't it? Well, the NYPD inspector general released a report in 2016 that found no correlation between the NYPD's enforcement of low-level crimes and drops in more serious crime. And after stop-and-frisk essentially ended in 2014, crime in New York City continued to drop. Other academics, like Columbia Law School professor Bernard Harcourt, have argued there has never been any empirical evidence that cracking down on minor crimes prevents more serious ones.

All of this, according to Bratton and other apologists, is the shining success of broken windows policing.

Broken windows policing and CompStat were exported to other major cities with similar results. In 2017, the American Civil Liberties Union (ACLU) sued Milwaukee, where the police chief was a staunch disciple of broken windows policing, over its high-volume stop-and-frisk program.

According to the lawsuit, the combined number of Milwaukee police traffic and pedestrian stops nearly tripled from 2007 to 2015, rising from 66,657 to 196,434. The ACLU says CompStat's devotion to numbers turned these stops into, essentially, a quota system. A 2011 investigation by the Milwaukee Journal-Sentinel found that black drivers were seven times as likely to be stopped by city police as white drivers, and twice as likely to be searched.

In his later years, Kelling tried to distance himself from broken windows' real-world application. In a 2015 essay for Politico, roughly a year after Garner's killing, Kelling wrote that his and Wilson's theory had been "largely misunderstood":

First of all, broken windows was never intended to be a high-arrest program. Although it has been practiced as such in many cities, neither Wilson nor I ever conceived of it in those terms. Broken-windows policing is a highly discretionary set of activities that seeks the least intrusive means of solving a problem—whether that problem is street prostitution, drug dealing in a park, graffiti, abandoned buildings, or actions such as public drunkenness. Moreover, depending on the problem, good broken windows policing seeks partners to address it: social workers, city code enforcers, business improvement district staff, teachers, medical personnel, clergy, and others. The goal is to reduce the level of disorder in public spaces so that citizens feel safe, are able to use them, and businesses thrive. Arrest of an offender is supposed to be a last resort—not the first.

There's another truism that might make a good name for a policing theory—the one about hammers and nails.

Meanwhile, the fact that Kelling disavowed this monstrous version of broken windows policing hasn't stopped its biggest cheerleaders, such as Heather Mac Donald, from continuing to insist that it is all that stands between good people and the forces of anarchy, or that the occasional death for allegedly selling untaxed cigarettes is a sad but necessary externality.

Unfortunately, the pernicious effects and misplaced hope of the broken windows theory of policing seems all but assured to outlive its creators.