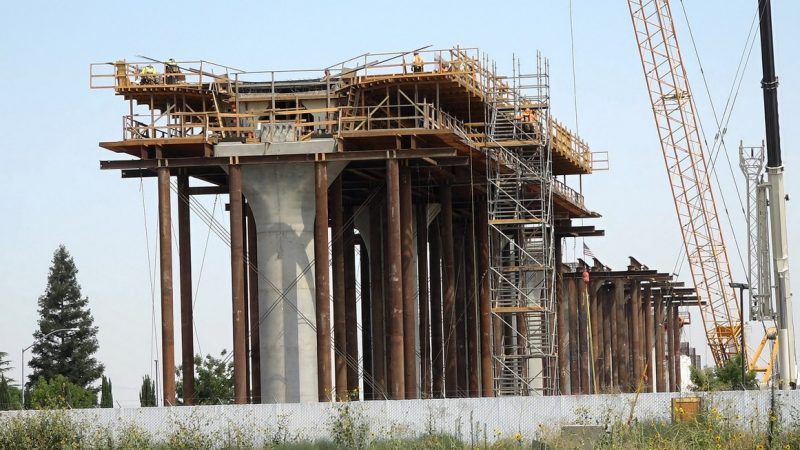 Good news for every American who doesn't live in California: If that state insists on pushing forward with its overbudget, behind-schedule boondoggle of a bullet train, it won't be with your money.

The Federal Railroad Administration yesterday formally terminated a $929 million grant to help pay for the construction of a high-speed rail line that was originally supposed to link Los Angeles and San Francisco. The Los Angeles Times reports:

The California High-Speed Rail Authority "is chronically behind in project construction activities and has not been able to correct or mitigate its deficiencies," said Ronald Batory, chief of the federal agency.

The railroad administration's letter notes that the agency rejected every quarterly budget that the state authority submitted since late 2016, repeatedly admonishing the state for "deficiencies and errors" in its documents. The letter alleges the state made ineligible expenditures from the grants, including giving a bonus to consultants for meeting the terms of the grant and paying for expenses "related to a consultant's name change."

The feds warned back in February this was likely coming. While there is no love lost between President Donald Trump and California's political leadership, this isn't mere politics—it's a long-overdue response to a construction plan that has grown wildly, absurdly, almost comically out of control.

Voters were initially told they could have the entire train complete and running for $33 billion by 2028. Now the full costs are predicted at $77 billion, and they're probably much higher even than that. The first leg of the train, in the Central Valley, won't be running until 2028, at which point it is expected to cost more than $20 billion for 171 miles of track between Merced and Bakersfield. And there's no substantial plan for how these trains are going to realistically connect to San Francisco and Los Angeles.

Since the warning in February that the federal funding is in danger, even more details about the piss-poor management of the rail program have come to light.

The California High Speed Rail Authority sold the state the idea that they could save money in the design process by relying on outside contractors and consultants rather than state employees. That may superficially sound like a good idea, but these public-private partnerships are only as good as the oversight. In April, the Los Angeles Times reported that these consultants were raking in hundreds of millions of dollars—and that relying on them was actually driving up costs. An engineer from a consulting firm cost an average of $427,000 annually, compared to $131,000 for a state-employed engineer.

I didn't blog that April report at the time, because it felt as though we were treading into "dog bites man" journalism. The entire project was clearly intended to be captured by consultants, and that's exactly what happened. Reason has criticized this entire from the start, in part because we knew full well that the state had severely lowballed the costs.

But California's leadership is going to fight reality, because God help any government that acknowledges the sunk cost fallacy. Gov. Gavin Newsom initially suggested that he was going to scale back the train plan, but now apparently he's going to fight for this money. The Times reports that they're going to keep working on the train in hopes that they either win a legal challenge (which seems really dubious—even state auditors have been blasting the mismanagement of the project) or get more money from cap-and-trade auctions.

The feds are also still seriously considering trying to force California to pay back $2.5 billion of federal funds that have already been spent. So the skyrocketing costs of this trainwreck may eventually include repaying $2.5 billion to Washington.