Bill de Blasio Is the Worst 2020 Candidate on Property Rights

The mayor of America's largest city is openly contemptuous of private property rights. 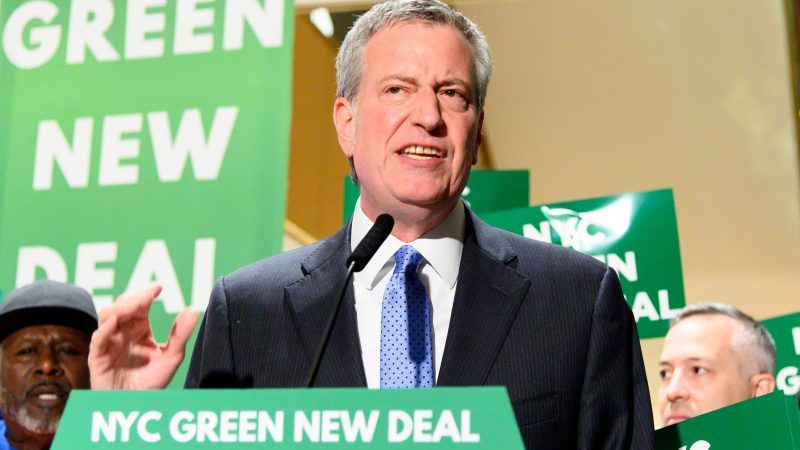 None of the Democratic candidates running for president in 2020 are great on the issue of property rights, but the race's newest entrant might just be the worst of the bunch.

On Thursday morning, New York City Mayor Bill de Blasio announced that he would be competing for his party's nomination for president, making him the 23rd Democrat to do so.

Given his zealous support for shifting wealth from the wrong hands to the right hands, it should come as no surprise that Mayor de Blasio has taken a dim view of property rights.

For a couple of days in late April, to take the most recent example, de Blasio told anyone who would listen that he wanted to prohibit developers from constructing glass and steel skyscrapers.

"We are going to ban the classic glass and steel skyscrapers, which are incredibly inefficient," the mayor said on MSNBC. That same day on a local news show, de Blasio reiterated his call for a skyscraper ban while adding a little garnish of class warfare.

"Glass and steel buildings, the ones that were built for decades, were just huge emitters of greenhouse gases," he said as quoted by Curbed."They were built, as you know, [as] monuments to wealth but they were horrible for the environment. And what we are saying is we are going to ban those."

The "ban" de Blasio is described turned out to be more rhetorical flourish than concrete policy. The mayor's director of the Office of Sustainability later clarified that there would not be a strict ban on using glass in new high-rises. Rather, developers would be required to abide by very strict energy efficiency practices when putting up new buildings.

That de Blasio would feel the need to describe his yet-to-be-formulated policy as a ban, even when it's not, is telling. The mayor has little compunction about telling property owners what they can and can't do with their land. Indeed, that's part of his brand.

Take, for instance, de Blasio's call back in January for the city to seize the buildings of landlords who've let their apartments fall into disrepair.

"When a landlord tries to push out a tenant by making their home unlivable, a team of inspectors and law enforcement agents will be on the ground in time to stop it," de Blasio said."We will seize their buildings, and we will put them in the hands of a community nonprofit that will treat tenants with the respect they deserve."

This, again, was mostly bluster. The only policy change to come from the mayor's call for dispossessing landlords of their property was an executive order creating an Office to Protect Tenants, which was given the more modest portfolio of connecting renters with existing social services.

"I am deeply concerned by Mayor de Blasio's proposed expansion of property seizures like those carried out through the controversial Third Party Transfer [TPT] program," wrote Council Member Robert E. Cornegy, Jr. (D), making reference to a city program that seizes properties with unpaid taxes or utility bills, and then hands them over to a third party who then sells them to developers.

The program has courted controversy over a number of its completed and attempted takings, including one instance where the city tried to seize the $2 million property of a woman for having a $3,000 delinquent tax bill.

A class action suit has also been filed against the city alleging the TPT program has resulted in numerous unconstitutional property seizures.

Lest one think too much is being made of a few random examples, de Blasio has been quite explicit that his dim view of private property extends beyond a desire to go after slumlords or cut back on emissions.

Here's de Blasio in 2017 questioning the very existence of private property in an interview with New York Magazine:

"What's been hardest is the way our legal system is structured to favor private property. I think people all over this city, of every background, would like to have the city government be able to determine which building goes where, how high it will be, who gets to live in it, what the rent will be. I think there's a socialistic impulse, which I hear every day, in every kind of community, that they would like things to be planned in accordance to their needs. And I would, too. Unfortunately, what stands in the way of that is hundreds of years of history that have elevated property rights and wealth to the point that that's the reality that calls the tune on a lot of development."

"If I had my druthers," added de Blasio in the same interview, "the city government would determine every single plot of land, how development would proceed. And there would be very stringent requirements around income levels and rents. That's a world I'd love to see."

This is a remarkably explicit attack on both the idea that private landowners have a right to make decisions about what to do with their own property and on the constitutional protections of that right.

That makes de Blasio even less of a fan of private property than self-described socialist Sen. Bernie Sanders (I–Vt.) who has been at least been a consistent critic of eminent domain.

America's cities, New York included, are suffering from a worsening housing affordability crisis. Rents and home prices continue to rise, straining the budgets of some tenants, and forcing others to decamp to the fringes of urban areas in search of cheaper housing.

In large part, this is the result of government regulations that dictate what can get built where and force property owners into labyrinthine approval processes that can add years to the completion time of projects.

That the mayor of the country's largest city doesn't see the current level of government regulation of land use as a problem, and in fact wants to go further by rolling back protections of private property altogether, makes de Blasio unfit to government New York City, let alone the entire country.