He'll creak in the direction of the prevailing political winds eventually, for good and mostly ill. It's his greatest weakness, and main selling point. 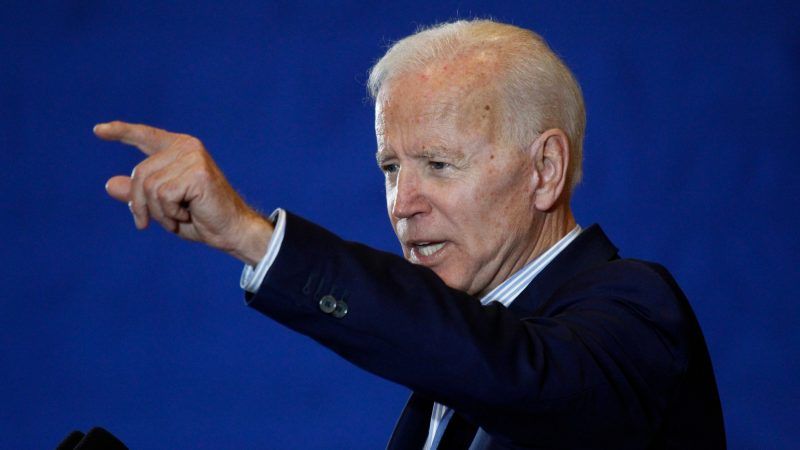 Say what you will about the ethics of plagiarists—at least they have an ear for what audiences want to hear.

When Joe Biden cratered in his first official run at the White House in 1987, it was because of a series of borrowed speech passages, hand gestures, and even biographical details (no, he didn't derive from a family of coal miners, as he once claimed, nor was he "the first" in his clan to ever attend college; he lifted those details from a speech by U.K. Labor politician Neil Kinnock). The deceptions nonetheless revealed a political truth: Ronald Reagan had peeled off blue-collar voters from the Democratic Party, and it would take a relatable, regular-sounding Joe to lure them back.

Americans may tell themselves they seek candidates who lead, but in reality they're more likely to reward politicians, like Biden, who follow where public tastes have already gone. You generally don't serve in multiple tiers of elected office for his 47 years—longer than Pete Buttigieg, Beto O'Rourke and several other Democratic presidential candidates have been alive—by getting out ahead of voters' comfort zones. You get there by being a weather vane.

Joe Biden is a political weather vane covered in rust. He'll creak in the direction of the prevailing winds eventually, apologetically if need be, but don't expect the man to point toward some bold new future. It's both his main selling point and greatest weakness.

During the late 1980s and early '90s, when the country was at the exhausted end of a three-decade rise in violent crime, Biden was right there putting his fingerprints all over what would become America's mass incarceration machine. He co-sponsored the Anti-Drug Abuse Act, which included much tougher penalties for crack cocaine than for powder cocaine, and lamented that "6 out of every 10 criminals who are arrested on drug charges have their cases dropped."

Now that even a law-and-order Republican president is pushing through criminal justice reform, Uncle Joe is characterizing his role in the crack/powder disparity as a "big mistake."

Biden absolutely will follow, not lead, on legalizing marijuana, which two out of three Americans—and all 12 presidential candidates immediately behind him in national polls—now support. Even while serving in the White House with "Choom Gang" emeritus Barack Obama, the then-veep was still using old-timey prohibitionist language, calling pot a "gateway drug."

Think of every time American public opinion over the past half-century swung toward a public-policy hysteria many would eventually regret, and you'll see Joe there, Zelig-like, flashing his choppers. Iraq war? Check. The (as characterized by Vox's Dara Lind) disastrous, forgotten 1996 law that created today's immigration problem? Yep. Patriot Act? He's been dining out on that one for years.

Those of us wary of government power shudder at the sight of politicians with a demonstrated eagerness to wield it when the masses get rowdy. And yet Biden's finger-in-the-wind ideological pliability can have its uses, too, most famously in 2012, when he gingerly led his party to the conclusion on marriage equality its voting members had long since held. This, less than two decades after (of course!) voting for the notorious Defense of Marriage Act.

Biden's current high standing in the polls is a sight to behold for those of us who remember his six feeble previous flirtations with the Oval Office. It suggests that, in a cycle in which Democrats are prioritizing electability more than in any recent election, it's precisely Joe's rust that makes him attractive.

With the exception of the vanishing never-Trump rump, just about every right-of-center political and policy grouping I'm aware of is gearing up for 18 months of trench warfare against incipient socialism. "If Trump doesn't win," the once-Trump-averse Glenn Beck recently warned, "we are officially at the end of the country as we know it."

In a campaign that has already zoomed from Medicare-for-all to the Green New Deal to even slavery reparations with vertigo-inducing speed, who among the recognizable half of the Democratic field seems least likely to hoist the red banner? Rust is not, after all, a useful lubricant for revolution.

While Sen. Elizabeth Warren (D–Mass.) is out there unveiling giant (and costly!) new policy proposals every 48 hours or so, Biden just waves off any such commitments, saying he doesn't "have the time to completely lay out all the details" of his plans.

In a political moment so weird that Donald Trump is president and Bernie Sanders damn near took over the Democratic Party, it may seem counterintuitive to bet on a politician who works so hard at coloring inside the lines. But two-party systems tend to resemble pendulums. After four years of comparative madness, maybe Americans are looking for a typical politician: unprincipled and pandering, sure, but at least predictable. And slow.