The Brink, a documentary about the former Trump adviser, delivers an interesting insight. 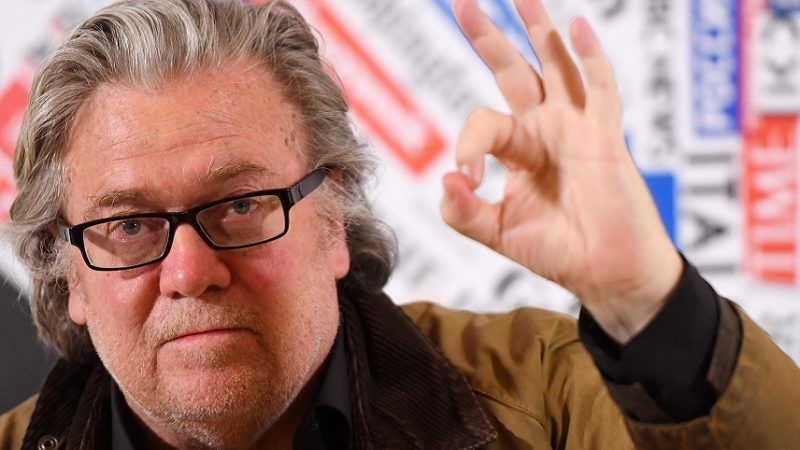 If you want to understand the "economic nationalism" that undergirds the right- and left-wing populism currently sweeping Europe and the Americas, Alison Klayman's new documentary The Brink is essential viewing.

Klayman embeds with former Trump adviser Steve Bannon as he crisscrosses America and what Donald Rumsfeld once caustically dismissed as "Old Europe," trying to create an international movement devoted to tightening national borders. He bounces from meetings with Trumpy Republicans, Brexiters such as Nigel Farage, National Rally Frenchies, and unapologetically xenophobic Beneluxers who are barely distinguishable from each other as they fret over the loss of uniquely Belgian and Dutch cultures.

Klayman is immensely talented as a filmmaker (Ai Weiwei: Never Sorry rightly took home a fistful of awards in 2012), and she fully captures Bannon's arrogance, pettiness, and delusions of grandeur. He comes across by turns as charming, fake, cringey, and a deeply committed ideologue who really thinks he is saving the future from the clutches of globalists, rootless cosmopolitans, and Davos-dashing liberal elitists completely out of touch with the dreams, hopes, and fears of regular people all over the planet.

What I took away from the movie was less about whether Bannon might personally be able to scale Trumpism up to the international level and more about the realization that nationalism vs. globalism is the fundamental political cleavage in the 21st century. Donald Trump and Bernie Sanders have far more in common with each other than they do with many people in their own parties; one reason American politics is increasingly spiteful and stupid is because we're speaking in terms—right-wing and left-wing, liberal and conservative, even socialist and capitalist—that have become outmoded. There are socialist populists and socialist internationalists, right-wing populists and right-wing internationalists, and on and on.

Friedrich Hayek famously dedicated The Road To Serfdom to "the socialists of all parties." In the 21st century, libertarians are going to have make common cause with the globalists of all parties, with the people whose core value is the right of individuals to move freely around the planet. There will be lots of arguments over whether globalism also means that goods and services should move freely too, but that may be a secondary issue for some time to come. We live in a hopelessly mixed economy and that's unlikely to change anytime soon (though we should always be pushing for more choice and less top-down control). The real question is whether it will become harder or easier for people to cross borders.

Bannon's vision is of a world of distinct nations and cultures that might be defined by any number of factors, including race and ethnicity, but also a common history, religious values, or shared geography. His economic nationalism is a reaction, partly correct but mostly false, to the belief that large, global forces—some impersonal, some embodied in specific elites and individuals, from Hillary Clinton and George Soros to Warren Buffet or Richard Branson—are calling all the shots.

This outlook holds that free trade, automation, and other forces are taking work from the regular guy or gal, even as newcomers—low-skilled immigrants hungry for work opportunities, refugees and asylees, professional-class globe trotters—seem to be swamping the mother country and simultaneously flourishing economically and sucking off the teat of the welfare state (this is known as "Schrodinger's Immigrant"). This is Donald Trump's worldview, and it isn't far from Bernie Sanders' too. The Vermont socialist is a critic of "open borders," denouncing the very concept as "a Koch brothers proposal" that would drive down wages for Americans. Trump and Sanders (and other populists, such as Elizabeth Warren) are all against free trade because they believe that stuff from poor countries will always undercut anything made in America. They express themselves witf very different tonalities and words, but the policy implications aren't so different.

The message that populists, whether right-wing or progressive, articulate is mistaken, but it does contain elements of truth. The "rich" did not capture all the income gains of the past 30 or so years, and economic mobility remains the rule rather than the exception. But there's no question that a sizeable percentage of Americans are not doing well and, as important, feel as if they have no control over how their lives turn out. Limiting the flow of people and goods over borders—economic nationalism—makes sense from this point of view. Such actions strongly imply a collective identity that will limit interest in individual rights, inciting yet more populist policies.

Libertarians and others who believe in free movement and free trade need to acknowledge the emotions that undergird economic nationalism. We need to explain how we can build resilience into the system, and we need to explain the benefits of a globalized world—that, for example, cities that welcome immigrants experience increased wages and lower unemployment. We need to update our arguments about why individuals are ultimately more important than groups, and about why empowering individuals creates a richer, freer, and ultimately more socially cohesive world. We need to show that there is no inherent tension between being a citizen of the world and a proud son or daughter of one's country, region, and hometown. And we're going to have reach out to liberals, conservatives, and progressives who identify with freedom of movement as a moral right and economically superior.

Watching The Brink made me think that for all the other differences Reason has with the socialist magazine Jacobin, it may matter far more that we share a belief in open borders.

Here's the trailer for the documentary.