The Hellboy Reboot Is a Damned Awful Movie 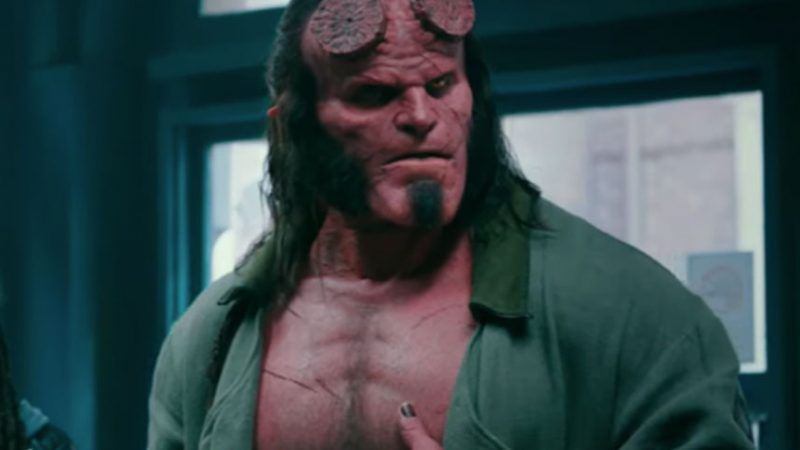 As I watched Hellboy, Neil Marshall's sloppy attempt to reboot a franchise begun 15 years ago by director Guillermo del Toro, I could not help but think about the original. When it hit theaters 15 years ago, Hollywood's superhero transformation had barely begun. Spider-Man and the X-Men had been spun into successful big-screen franchises, but Christopher Nolan's Batman was still a year away, and the Marvel juggernaut wouldn't begin until the final days of the George W. Bush presidency. Comic book movies were still something of a niche product, made for—and by—people who liked, and even loved, actual comic books. People, in other words, like Guillermo del Toro.

His Hellboy, which starred the block-headed Ron Perlman as the titular demon, was nothing if not a labor of love. Although he drew plenty of inspiration from the Lovecraftian pulp of Mike Mignola's cult horror comics, he embedded the movie with his own distinctive sensibility: His Hellboy was, on the one hand, an overpowered comic-book action hero who blasted away at giant demons while spitting out quips and catchphrases. But he was also a lovelorn, middle-aged sad sack, a curmudgeon who lived in a dingy bachelor pad with a horde of cats and had domestic squabbles with the love of his life, a woman who occasionally burst into literal flames. Perlman imbued the role with surly, action-hero bluster, but also with genuine feeling, a sense of tragedy and heartache. His Hellboy was a monster, yes, but a monster you could relate to, because he was a monster who could love.

Del Toro shot and designed the movie with his usual fussy reverence, creating a slew of startling characters and memorable setpieces on a mid-sized movie budget. Hellboy was a model of what a comic book movie could be—funny, thrilling, emotionally engaged, a platform for a director's distinctive vision, broadly appealing but not burdened by blockbuster formulas and expectations; a perfect balance of niche and mass appeal. The movie and its 2008 sequel, which upped the monster quotient while largely retaining the panache and charm, remain high points in the history of superhero filmmaking.

So it's difficult not to compare any revival to the original. Sadly, although they share the same name and central character, Hellboy (2019) and Hellboy (2004) have little else in common.

In contrast with the gentle charm of del Toro's PG-13 films, Marshall's R-rated movie is loud, obnoxious, and pointlessly grotesque. Its gore is mostly cornball, the stuff of cheesy direct-to-video splatter films and adolescent shock-horror. Despite the stronger rating, he has somehow made a film that is less suitable for adults.

Marshall has directed some fine low-budget horror movies, including Dog Soldiers and The Descent, and he is responsible for some of the most viscerally exciting, action-heavy episodes of Game of Thrones, including the excellent fourth season climax, "The Watchers on the Wall." But working on the larger canvas of a comic-book feature, he's out of his depth: The effects work looks cheap to the point of being trashy, and the action scenes are often sloppy, with frenetic computer-assisted long-takes that whirl hectically through virtual space, as if the camera had been attached to a beach ball, then tossed around for fun. Presumably this is supposed to generate excitement, but mostly it's exhausting.

The story casts Hellboy as an agent of the apocalypse brought on by a long-simmering battle between man and monster, but the script is a tedious, unevenly paced mess. Throughout my screening, I found myself checking the time; when, I wondered, would the end finally be nigh?

As Hellboy, meanwhile, David Harbour makes a poor replacement for Perlman, who gave the character depth and range, shifting deftly betwen boyish glee, middle-aged exhaustion, and timeless heartache. There was a lot going on beneath his whittled-down horns and lava-red skin. Harbour cuts a passable demonic figure underneath layers of prosthetics and makeup, but he offers little more than varieties of ornery exasperation, as if he is perpetually irritated to discover the quality of the movie in which he is in. Fair enough.

The other characters, and the performers who play them, are even less engaging, a marked downgrade from the del Toro era, where every supporting character—from the silent, wind-up henchman filled with sand to the gaseous paranormal colleague to the blustery, bureaucratic boss—was a fully realized oddball in his or her own right.

In many ways, the very existence of del Toro's Hellboy poses a problem for this new incarnation: The original was so idiosyncratically delightful that it set a nearly impossible bar for any successor. Del Toro is, admittedly, a singular filmmaker and it would be hard for any director to match his unique combination of pathos, precision, and sheer creepiness. But Marshall doesn't help himself by including a sequence that essentially replicates the origin sequence that opened del Toro's Hellboy, showing just how comparatively limited a filmmaker he is.

Marshall's Hellboy fails on its own terms as well. Although it occasionally manages to hint at the jaunty, heavy metal acid trip it clearly aims to be, more often it comes across as cheap and slapdash, like an over-produced TV movie that somehow snuck its way onto the big screen. The movie wants to be over the top; viewers, I suspect, will just want it to be over.

Perhaps it is too much to ask for a comic book movie about a grumpy demon who works for the government as a monster-slayer to have a heart, or wit, or be pleasing to the eye. Certainly, the trend in superhero movies over the last decade and a half has been towards a certain blandness, in which audience expectations are dutifully acknowledged and then met in comforting, routine fashion. As they have taken over the multiplex, these movies have also lost some of their eccentricity and niche appeal. Yet del Toro's Hellboy films are reminders that comic-book movies, at their best, can be genuinely magical experiences, and that even a fantasy film about a super-powered hell creature can have a soul.

Marshall's schlocky rehash, on the other hand, is two hours of cinematic torment. There are still bright spots in the comic book movie industrial complex, but the trajectory in this particular case is worrying. If this is a preview of the future of comic book movies—which is to say, the future of movies—then Hollywood and everyone who loves it is surely damned.