Why Tyler Cowen Loves Big Tech (And Thinks You Should, Too)

A love letter to getting good stuff cheaply 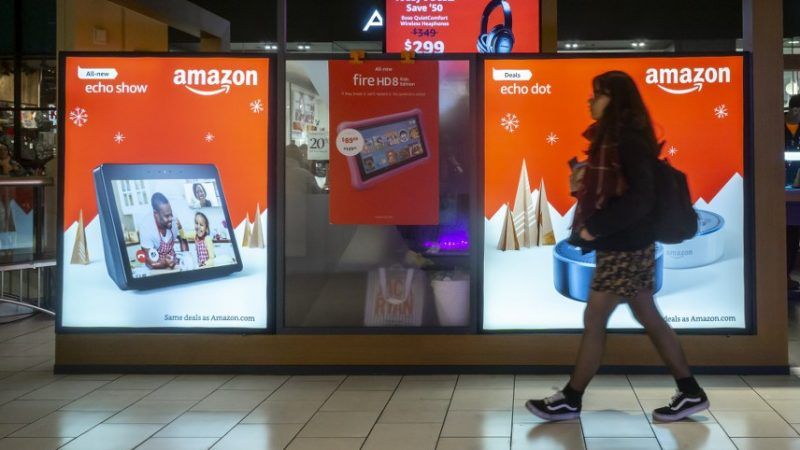 Have you about had it with big technology companies?

There are plenty of headlines to back you up. Whether it's data grabbing, security breaches, aggressive business practices, or wishy-washy content policies, most people can find good reason to gripe about Silicon Valley. As I write, I see that third party developers exposed the data of half a billion Facebook users on an unsecured cloud server. It sometimes feels we are reaching a boiling point.

Still, it is rare to find someone who follows through and fully extricates big technology businesses from their life. Do you still use Google? Amazon? Facebook? It's very likely that you do, even if you think you don't.

Could it be that you are getting a better deal from big technology companies than you realize? George Mason University economist (and—disclaimer!—my big boss at the Mercatus Center) Tyler Cowen thinks so, and he has penned a new book to convince you that you should love big businesses as much as he does.

It's called Big Business: A Love Letter to An American Anti-Hero, and it indeed sings the praises of today's bêtes noires. In true Cowenesque fashion, the book starts out with a markedly contrarian premise that by the last page seems so evident that you wonder why it first felt outlandish at all. I expect that even the most dogged big business critic will feel just a little tenderer towards today's titans by the end (whether they want to admit it or not).

The simple fact is this: most of what we love and need—"ships, trains and cars; electricity, lighting, and heating; most of our food supply; most of our lifesaving pharmaceuticals; clothes for our children; telephones and smartphones; the books we love to read; the ability to access the world's information"—comes from businesses, and usually big businesses at that.

Companies are made up of humans, who are very flawed. So companies make mistakes. But Cowen argues that big corporations are often less likely to take moral missteps than individuals because it is bad for business. And as flawed humans, we tend to focus on the negatives while taking the many, many positives for granted. Are we spoiled by our own successes?

There's a lot to unpack from the book, but readers of this column will be particularly interested in his take on the tech giants. They are attacked as stagnant monopolies whose products make us dumber. But as we'll see, there are reasons to revisit this common perspective.

Competition is harder to see

Are tech companies monopolies? Many think so. The so-called FAANGs—Facebook, Apple, Amazon, Netflix, and Google, let's throw Microsoft in there as well—are formidable indeed. They generate enormous sales and profits; some sit on kingly mountains of cash. Though their products and services span multiple markets, several of these companies command sizable portions of individual sectors like online advertising and cloud computing.

But are they monopolies?

If they are, they are odd ones, says Cowen. For one, they would be among the first "monopolies" that provide their products to consumers at no or very low price. Generally, the concern is that a monopoly will jack up rates in the absence of alternatives. After all, they have the market caged. This is why antitrust enforcers have developed a strong consumer welfare approach to safeguard against such commercial captivity.

Maybe technology companies are not acting like classic monopolies because there is more competition than meets the eye.

Cowen considers search. Querying information online has become synonymous with the market leader—"to Google" is a daily verb—but it is far from the only game in town. There is also Bing, Yahoo, Ask.com, AOL, WolframAlpha, DuckDuckGo, and my personal favorite, Startpage. (If you're worried about tracking, the last two might be for you.) All are free and work well. Is it a problem if Google is simply far superior for most people's needs?

Of course search is not all that Google does. It offers free email, browser, navigation, video, publishing, calling, chat, and photosharing services, among many other things, as well as paid media, smarthome, and even broadband services.

There is ample competition in those areas, too, but people aren't generally very worried about them anyway. Rather, their concern is the mighty foundation supporting it all: advertising.

But Cowen says this does not look much like a monopolistic enterprise, either. Other big technology companies like Facebook, Microsoft, and increasingly Amazon also provide competition in advertising. And you don't have to advertise online. Businesses could opt to advertise on television, the radio, the newspaper, billboards, or with old fashioned junk mail. From this vantage point, there is more competition in advertising than ever, and most of the innovation and new competitive forces stem from today's technology giants creating yesterday's new markets.

Where the innovation is

Part of the reason that competition is hard to see is that big technology companies are truly very innovative. Not only have these companies created new mediums to compete with existing analogs, they spawn auxiliary competencies—think of Amazon and cloud computing—that also create new markets. And their profitability allows them to invest in research and development for "moonshot" ideas like self-driving cars, artificial intelligence, and literal rockets to the moon.

Cowen discusses a common criticism of big technology companies: that they merely buy up promising upstarts that could otherwise exert competitive pressure. This is seen as evidence not only of a poor competitive environment, but also of a tendency to stifle innovation for fear of creative destruction.

Yet many of today's antitrust anxieties are fueled by acquisitions or developments by big technology companies that were at one time considered foolish or wasteful. They ended up being transformative.

But we forget that when Google acquired this little-known project in the mid-aughts, it was seen as a head-scratching move. The early smartphone market had been characterized by proprietary smartphone software bundled with hardware and sold by companies like Apple, Nokia, and RIM (Blackberry). Google's crazy bet was to unbundle the OS from the hardware, and keep the OS open source at that.

The rest is history, and Apple struggles in many countries to keep up in the market it created. Google's Android pivot was incredibly innovative. We just don't fully appreciate it now because it was so successful.

And as mentioned before, most of the software and digital products that we rely on each day come from a big technology company. Even if they were not totally developed in-house, big companies have the resources and talent to dramatically improve the products of its acquisitions. Would YouTube ever have grown to what it is today without Google's armies of lawyers and programmers needed to navigate such an enterprise? It is unlikely.

A final note on media and bias

Discussions of anti-technology animus often begin with a mention of "headlines." I did so in this very article, and for good reason. You are probably more likely to learn of a big tech misstep in a news article, usually on a social media platform, than from a disgruntled customer that you know personally. Most of the time, big tech works very well in our day-to-day lives and the lives of our family and friends. (A recent list of the most beloved brands puts Amazon, Google, and Netflix in the top three spots.)

And the negative news stories will usually outnumber the positive ones by virtue of the enterprise. Let's face it: "World's biggest technology companies continue to provide well-working products and services at good prices" does not make for a good headline. We crave drama.

But the media has a self-interested reason to trumpet such stories, too. They compete with big technology companies for our attention and clicks. Facebook and Google have disrupted or even overturned many media business models. The journalists writing stories and the editors selecting topics feel existential dread about technology eating their lunch.

We have our own biases, too. Underpinning Cowen's arguments on big technology companies is his observation that we tend to think of corporations as people, even as friends. Not in the much-ballyhooed "Citizens United" kind of way, but as a leftover quirk of our underlying hunter-gatherer psychology. Our brains were built in environments that prioritized close personal connections for survival, not a world where we can easily conceptualize the complex and sometimes isolating reality of global institutional coordination.

We simply don't have a good mental model for "autonomous hive of thousands of mission-affiliated avatars," so we think of "Mark Zuckerberg's Facebook" instead. And we ascribe human traits and motivations—"don't be evil," "move fast and break things," "think different"—to these companies as well.

When we feel a big technology company has wronged us, we don't default to the idea that perhaps a line of code went awry, or one team had insufficient input from other engineers, or weather conditions flummoxed a delivery. We feel like Jeff Bezos's Amazon has intentionally ripped us off for profit, and our hindbrains excrete all of the satisfying outrage that comes with such a personal slight. It's like a friend of ours did us dirty.

None of this is to say that big technology companies are perfect, in fact I am often among the critics, but rather that they are underrated. We take for granted the glittering images that surround us while reacting in deeply human ways to what is often simply the innocuous result of a breakdown in global coordination.

Cowen thinks you should cut big tech a little more slack. Maybe he won't convince you to write your own love letter. But at the very least, he will push you to consider what we could lose if this anti-tech trend becomes more firmly enshrined in law.