Shazam! Is a Captain Marvel Movie Worth Seeing

A charming, lightweight superhero movie that works hard to please. 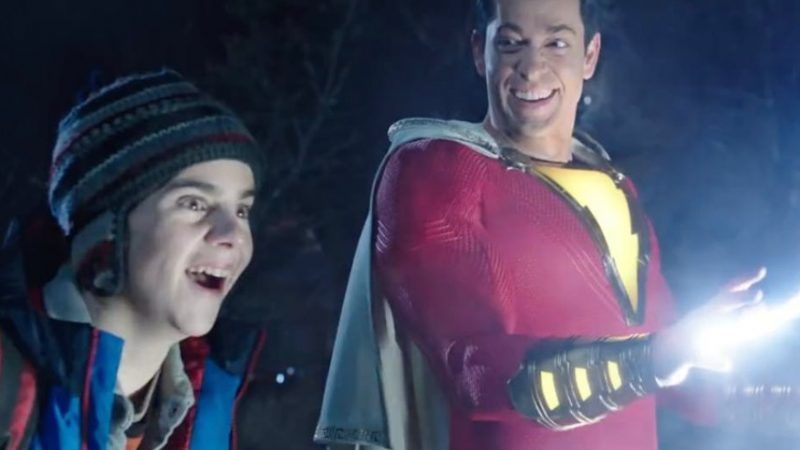 These days, it's easy to be cynical about superhero movies. Over the last two decades, the genre has all but consumed the blockbuster business, leaving a trail of predictable, formulaic spectacles in its wake. Most are fine, and some are pretty good, but rarely are they any better than that, even (and sometimes especially) when they aspire to more.

That's a big reason why Shazam! is such a low-key delight. Its aspirations are modest—it wants to amuse and entertain while delivering a feel-good moral about the value of family—but it works hard to achieve them. Although it is loosely connected to other movies in the DC Comics universe, it largely stands on its own, and it actively rejects the gritty pomposity that has plagued so many recent movies based on DC characters, choosing instead to emphasize the idea that being a superhero is fun—especially if you're a kid. It's a movie that aims to defeat superhero movie cynicism. For the most part, it succeeds.

Not many superhero movies can claim to be charming, but Shazam! has personality to spare. Much of that is a result of winning performances from its trio of leads: Asher Angel as Billy Batson, a foster kid who is granted magical powers by an ancient wizard; Jack Dylan Grazer as Freddy Freeman, another foster kid in Batson's group home, who ends up teaching Batson how to be a hero; and Zachary Levi as Shazam, the adult superhero that Batson becomes. Levi, in particular, plays the role of the comically oversized hero with a madcap commitment that is hard to resist: Not since Tom Hanks in Big (which gets an obliging reference) has an adult actor managed such a joyous display of childlike energy and enthusiasm.

There's a villain too: Dr. Thaddeus Sivana, a scowling, bald baddie with dastardly plans to blah blah blah something about the Seven Deadly Sins and infinite power…it doesn't really matter. Sivana doesn't have much depth, but he's played with reliable gusto by Mark Strong, who is so consistent in so many movies that it sometimes seems as if he has entirely cornered the market on middle-aged supporting actor roles. He's the Tommy Lee Jones of the 2010s.

Sivana exists mostly as an adult contrast to the childish glee of Batson/Shazam. Indeed, a significant part of what sets Shazam! apart from so many other superhero movies is its firm focus on children and their view of the world: Superhero movies are often designed to appeal to adolescents, but this one is actually about the often difficult experience of being one, even when you end up with superpowers Batson, who was separated from his mother early in life, finds himself surrounded by a makeshift family in a messy but emotionally warm foster home packed with cute—occasionally too cute—kids who ground the film in a geeky, gee-whiz innocence. (This is a movie in which one character says he took a "deep dive into peer reviewed studies about superpowers" and appears to be completely serious.) Shazam! isn't exactly a big idea movie, but it doesn't need to be: It's a big-hearted film about finding yourself by finding family, and its emotional simplicity and goofy earnestness account for much of its appeal.

Of course, there's the requisite superhero business as well.

The movie references other DC heroes, mostly Superman and Batman, but instead of setting up crossovers or franchise synergy, it treats them as childhood idols, role models for Batson as he struggles to figure out how to be a better hero.

If you go for the flying and punching and magical energy zapping, you won't be disappointed. But even the action scenes work a little differently from most superhero movies, where the object seems to be to show off the CGI budget. But instead of rolling out colossal spectacle for its own sake, Shazam! uses these sequences to support the movie's themes and define the characters and their personalities.

It helps, of course, that Shazam isn't as well known as some of his superpowered contemporaries. The character began in the 1940s as a Superman knock-off called Captain Marvel, which was later acquired by DC Comics after a legal dispute. Eventually, the name had to be changed for legal reasons. That old moniker now belongs to DC Comics' biggest rival, Marvel, which rolled out the big-screen debut of the current Captain Marvel last month.

The contrast between the two films couldn't be more stark: Captain Marvel was a charmless and underwhelming film about an personality-free character who struggled with nothing. The movie worked through predictable, forgettable superhero movie paces in pedestrian fashion, then expected viewers to show up and cheer simply because it existed. Shazam! is an energetic, charismatic movie about a relatable hero who struggles with everything. The movie works overtime to entertain, giving viewers something to appreciate and remember in nearly every scene. Captain Marvel, in other words, was the kind of superhero movie that breeds cynicism; Shazam! is the kind that defeats it. Finally, there's a Captain Marvel movie worth seeing.