Cory Booker Is the 'Plug and Play' Democratic Presidential Candidate

In friendly CNN town hall, N.J. senator tells his audience he knows what they want. 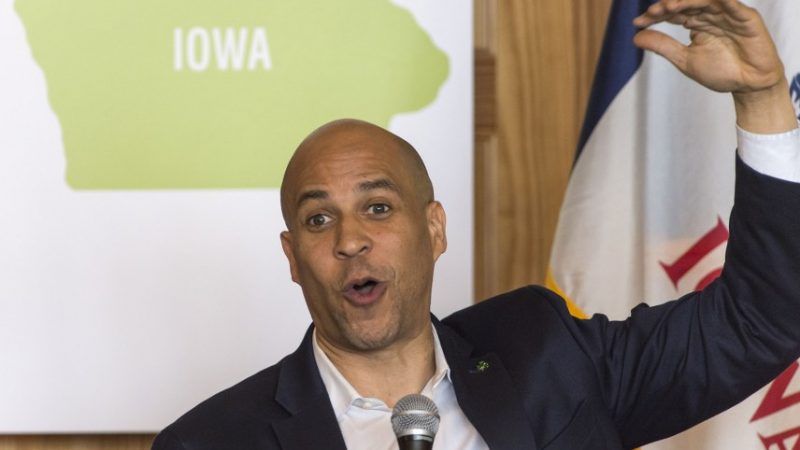 That's not a crack or insult against local South Carolina newspaper The Times and Democrat. It is an absolutely accurate summary of both the outcome of the town hall, and subtextually, how its impact should be evaluated.

This is not to say the town hall was substance-free (well, we could have done without discussion of Rosario Dawson as his girlfriend, prodded by extremely friendly and unchallenging CNN host Don Lemon), just that there were very few unexpected moves in this dance: Booker wants more gun control, more government funding for health care, to eliminate the electoral college, more spending on teachers, free community college, and higher caps on Social Security so wealthier people would have to pay in more.

Booker also nimbly dodged a question about Jussie Smollet's entire hate crime hoax case in Chicago to instead push forward the misleading statistic that hate crimes are on the rise. (As Reason's Robby Soave has explained, what's partly happening is that we have a much greater number of law enforcement agencies providing hate crime statistics to the FBI, leading to more accurate accounting.)

Despite saying he's the candidate for "love and unity," Booker made no effort to court Republicans or independents. He instead called for Democrats to work to take control of state legislatures and then later complained about the influence of "Republicans who control state legislators" when it came to crafting education policy. He's apparently in favor of unity to the extent that Americans rally behind every single plank in the Democratic Party platform.

If you were a Democrat, Booker's answers were probably comfort food. He is a "plug and play" candidate who's programmed with all the right things to say, with just the right tone and passion, to appeal to Democratic voters without being overly aggressive, even as he sets forth a vision that probably half of the American population does not support.

There were a few notable moments for non-Democrats:

If Booker was trying to assure a Democratic audience that he is a passionate believer in pretty much every single thing they believe, he did a good job. Whether that's a winning strategy for the Democratic primary—to say nothing of the general election—is another issue entirely.