That's just fine, unless you happen to be a president who promised to reduce it. 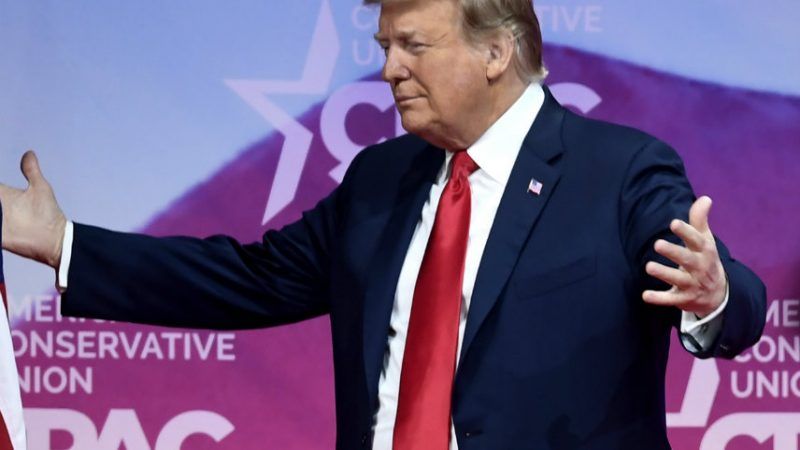 President Donald Trump's attempt at reducing America's trade deficit with foreign countries seems to have done exactly the opposite.

Data released Wednesday morning by the Census Bureau shows that America's trade deficit increased by 12.5 percent during 2018, hitting $621 billion by the end of last year (and $891 billion if only goods are considered, instead of goods and services combined). That increase occurred despite the Trump administration's decision to impose several rounds of new tariffs last year on imported steel, aluminum, and thousands of Chinese-made goods, all with the intention of reducing how much America imports.

Not only did the trade deficit—which measures the gap between the total value of all imports versus the value of all exports—widen during 2018, America actually imported a record amount of goods last year, according to the Census data. That happened despite the new barriers to trade raised by the Trump administration.

That's good news, because high levels of imports are a sign of a healthy economy. By the same logic, it's no surprise that America's trade deficit shrunk dramatically during the recession that followed the 2008 economic crisis.

But a larger trade deficit runs directly counter to the narrative Trump has been pushing ever since he started campaigning for the presidency. In Trump's zero-sum view of trade, a deficit indicates that America is somehow losing or being taken advantage of—you know, in the same way that a grocery store is taking advantage of you by selling you food. Most economists predicted that Trump's tariffs would not reduce the trade deficit, and it appears those predictions were accurate.

The tariffs may have failed their primary policy aims, but they have had other consequences—mostly negative ones. American consumers and businesses have not stopped buying foreign goods, as the new data indicates, but they are paying higher prices for the privledge of doing so. Steel- and aluminum-consuming businesses have been hit particularly hard by the higher prices created by tariffs. As I noted yesterday, a new study on the economic costs of the tariffs shows they they are costing $1.4 billion every month—that's above and beyond the direct costs created by the tariffs, which have transferred more than $12 billion from American consumers to the U.S. Treasury in the form of higher taxes.

Ironically, as NPR's Jim Zarroli writes, the 2017 tax cuts championed by Trump likely had more to do with the growing trade deficit than the tariffs did. Put more money in people's wallets, and they are going to spend it. Equally ironic is the fact that Wednesday's data shows America's economy to be in strong shape. But as trade attorney Scott Lincicome notes, Trump is unable to claim credit for that good news because he's spent so much effort promising the opposite.

Still, the biggest takeaway from the new trade data is not that the tariffs predictably failed to do what Trump thought they would; it's that the U.S. economy is powered by the individual decisions of millions of people and businesses, and that entity is far too complex and powerful to be controlled by the White House.