The Weekly Standard Was Wrong About Almost Everything

But it was wrong for the right reasons.

Katherine Mangu-Ward | From the March 2019 issue 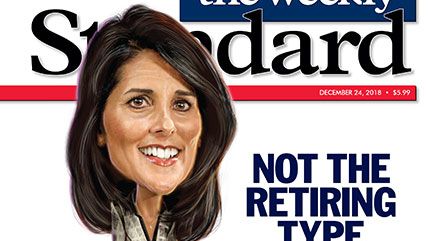 On December 14, the staffers of The Weekly Standard were called into a meeting and told that the issue they'd just put to bed would be their last. Writers and editors, many of whom had been with the magazine since it was launched 23 years earlier, were ordered to clean out their offices by the end of the day. They were not given boxes.

By Reason's lights, the editors of The Weekly Standard were consistently wrong about almost everything: the advisability of foreign military adventurism, the ethics of bioengineering and reproductive technology, the prospects for a John McCain presidency, and how many biographies of Lionel Trilling any sane human being could possibly be expected to care about, just to name a few.

For The Weekly Standard, the fundamental unit was the nation, not the individual. The magazine's signal achievement was making the case for the Iraq War, and in the wake of 9/11 the editors unreservedly endorsed classical notions of martial valor, civic duty, and traditional masculinity. They stuck by drug prohibition and straights-only marriage even as the nation left those notions behind.

Bill Kristol, Fred Barnes, Steve Hayes, and the rest of the gang put together a magazine every single week because they thought that by doing so they could make the world a better place. And the very act of publishing the magazine was actually a small step toward that end, because the world is a better place when the people with whom you disagree offer the very best versions of their arguments. It's better still if they do so in a carefully curated package on a regular basis.

When The Weekly Standard tweaked its opponents, it did so lightly and in a spirit of fun. When it attacked, it did so advisedly, because it thought a great deal was at stake. And when its writers argued in earnest, as they did most of the time, they did so with the benefit of historical literacy, occasional insider information, and ruthless copy editing and fact checking.

My first full-time job in journalism was at The Weekly Standard, so I am far from a disinterested observer. I was an uneasy fit from the beginning. They indulged me as a kind of domesticated pet libertarian—harmless enough, but not ultimately consequential. Which was fair.

Still, the Standard was, in many ways, a home for ideological and partisan misfits. The flagship journal of neoconservatism housed more than one anti-war senior editor. Kristol himself, who stepped sideways into journalism from the once-lively, now-forgotten world of blast-fax policy wonkery, was always a conservative. But the magazine he edited until 2016 was at times only barely Republican.

In 1995, when The Weekly Standard was just a few weeks old, President Bill Clinton launched a military intervention in Bosnia. The Standard supported the president (while also publishing a dissent from Charles Krauthammer), "for which sin a not-insignificant chunk of our original subscribers immediately canceled out on us," Kristol wrote in the magazine's 10th anniversary issue. As he later elaborated on C-SPAN, critics "wrote in saying they didn't subscribe to a conservative magazine so they could read editorials defending Bill Clinton."

While the Standard by and large plumped for the GOP during its lifespan, its loyalty was not unconditional. Republicans, never fully grokking this about the magazine, were surprised and disappointed over and over. But The Weekly Standard's willingness to cross party lines and give the other guys credit was admirable and rare. Rarer still, it had a willingness to call out the failings of its own team.

At the end of its run, the Standard once again came in for some "strange new respect" from the left after Kristol emerged as one of the most prominent voices on the right to oppose Donald Trump. But despite what you may have read in the president's Twitter feed, Kristol's opposition to the current president was not what killed The Weekly Standard. Philip Anschutz, who owned the magazine and dealt the death blow, is hardly a hardcore Trumpster.

In the version of the story told by Standard alumni David Brooks and John Podhoretz, Anschutz simply grew tired of the Standard's editorial intransigence. Like his predecessor Rupert Murdoch, he turned his focus and favor toward the more conventional and potentially profitable media assets in his portfolio. But unlike Murdoch, who had let the Standard go to another owner as he zeroed in on The Wall Street Journal and Fox News, Anschutz opted to launch a direct competitor based out of his other major media property, the Washington Examiner. By euthanizing the Standard, he was able to grab its subscribers and reduce his new magazine's competition. While the transition could have been better executed—someone should have at least stocked up on boxes for the departing staff—it's hardly petty penny-pinching to prefer not to sink a couple of million dollars a year into an enterprise that strenuously resists your efforts to monetize its content and ignores your suggestions about its editorial line.

The shuttering of the Standard has been offered as a parable about the changing journalism industry, and it was hardly the only magazine to stare death in the face this year. Digital publications such as Mic and Rare died or dramatically shrank. Refinery 29 and Rookie closed up shop. Time, Fortune, and The Atlantic all have dedicated billionaire backers for now, and New York magazine is on the search for its own sugar daddy. But Vice, BuzzFeed, and Vox trimmed staff and made changes to their business models in 2018. Perhaps the Standard was just another casualty of a tough business climate? Reason, along with Mother Jones, The Nation, and now National Review, is supported by a large and varied group of donors. That nonprofit model has protected us from much upheaval in the industry over the decades.

All of these stories have elements of truth—if anything, journalism faces a Murder on the Orient Express scenario, death by a thousand cuts. The newsweekly barely exists anymore as a genre, and it would have been hard for The Weekly Standard to switch to biweekly or monthly; it suffered for having a mandatory publication schedule right there in the title. Editors never quite settled on whether to reserve the best stuff for print (thus putting out a book of old news every week) or going all-in online. If insider accounts are to be believed, Anschutz's Clarity Media didn't live up to its name in communications with Hayes, who succeeded Kristol as editor in chief, over the last year. And an anti-Trump Beltway-insider right-leaning magazine does have a rather limited audience.

When the erstwhile Standard staffers gathered at writer Andrew Ferguson's house after the firings, the atmosphere was uncannily like a wake (or perhaps a shiva, as co-founder John Podhoretz joked). People who believed in the power of a magazine to bring about change sat around eating ham and drinking whiskey. They wondered—as those who are left behind do after a death—whether they had done the best they could while the magazine was alive, whether they had left the world better than they'd found it. Those are always hard questions to answer. But they are the right ones to ask.

Funerary orations often reveal more about the hopes and fears of the eulogist than the deceased. This one is no exception.

I have to believe there is power in the deep liberal humanism implicit in the format of a classic American political magazine. You've got the news of the day, war and scandal, votes and vetoes. But the politics is literally bound together with essays about arts and culture.

The message is unmistakable and easy to lose sight of in 2019: There is more to a good life than politics. A steady diet of horse races and roll calls, broken up only by weather reports or news of the weird, is like having a tube of Pringles for dinner and washing it down with a Coke Zero. Sure, it might be fun from time to time, but make it a daily habit and you'll eventually rot from the inside out. That's what cable news and clickbait sites have to offer. And it's not enough.

Whether or not it succeeds every time, a political magazine aims to provide a balanced meal. In its best issues, it offers a moveable (type) feast, powered by a genuine belief in the power of words and ideas to improve things. The Weekly Standard was one such magazine. And the death of a magazine that gets to all the wrong answers the right way is a terrible loss.