Is the Deregulatory Phase of the Trump Presidency Grinding to a Halt?

The Competitive Enterprise Institute says there's a bunch of regulatory warning signs, from trade to antitrust to speech. 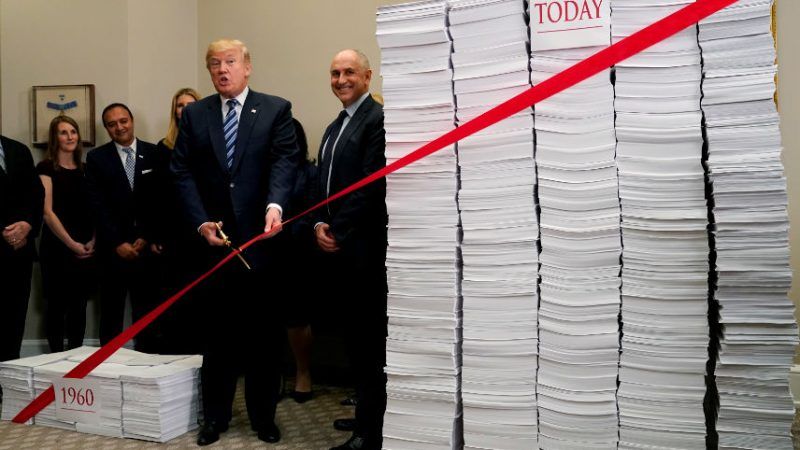 When President Donald Trump was preparing his first State of the Union address, I went around Washington talking to people who have toiled for decades in the largely barren fields of regulatory reform/rollback, and asked them what we might expect from a president who hadn't campaigned on the issue too much.

With some caveats, the army of Cato and Competitive Enterprise Institute (CEI) types were far more optimistic than I expected. "I think, he could be the most serious deregulatory president ever," said CEI's Myron Ebell, who in fairness had headed up the incoming administration's transition team for the Environmental Protection Agency.

Over the ensuing months Trump seemed to deliver on those expectations—tagging Neomi Rao to head up the Office of Information and Regulatory Affairs, hitting record lows in the number of pages added to the Federal Register, appointing two critics of regulatory deference to the Supreme Court.

But the caveats have always been lurking nearby. Actual deregulation requires legislation, and we have a historically cowardly Congress. And from media mergers to the movement of goods to the movement of people, Trump in several sectors has been tacking aggressively in the opposite direction of decontrol. "Now, if he keeps his promises on some other issues, like trade," Ebell told me, "I'm scared to death."

Well, yesterday CEI made that fear into a concrete article by Vice President for Policy Clyde Wayne Crews, titled "What If Trump's Regulations Exceed His Regulatory Rollback Savings?" Crews notes that "Present-value dollar savings from regulatory streamlining are purported to be $8 billion in 2017 and $23 billion in 2018, with $18 billion anticipated for fiscal year 2019," but that there are also "warning signs."

The major pertinent issue is Trump administration's own impulses favorable toward regulation, from antitrust to vaping. These undermine, and could even derail, his deregulatory program.

Crews then makes a sobering list of worrying areas—antitrust, speech, infrastructure, trade, telecom, the farm bill, vaping, bump stocks, subsidies, and so on.

Antitrust: Trump has been most explicit about invoking antitrust action against tech and telecom, striking a discordant tone with the rest of the explicit deregulatory agenda. Antitrust is the original sin of the Progressive administrative/regulatory state, yet Trump, as a candidate, promised to torpedo the AT&T-Time Warner deal, and his administration's Justice Department is engaged in an appeal of a court ruling approving the merger.

The president has also said that Google, Facebook, and Amazon may be in a "very antitrust situation," and told Axios that he was "in charge" and "looking at it." Some have called for the ultimate punishment, the breakup of such companies. Trump also tweeted that Comcast may be violating antitrust laws, though after mulling it over (itself a regulatory cost), the Justice Department did not investigate the Comcast-NBCUniversal alliance. […]

Speech:Trump economic advisor Larry Kudlow was asked this past summer about regulating Google search results, and said,"We'll let you know….We're taking a look at it." We have noted before that Google is a private entity, and search results are free speech. Google cannot censor anything. The entire Internet and all its underlying capabilities remain intact, crawlable as ever, unaffected by Google's existence.

Trump has tweeted extensively about social media censorship, and separately had threatened NBC's broadcast license. Asked at a November 7, 2018 press conference if he would regulate social media companies, Trump acknowledged that, "when you start regulating, a lot of bad things can happen." Nonetheless he said, "I would do that. Yeah. I would look at that very seriously. I think it's a serious problem. At the same time, you start getting into speech; that's a very dangerous problem. That could be the beginning. So it's very dangerous….But I would certainly talk to the Democrats if they want to do that. And I think they do want to do that."

Related to concerns about the social media environment, Trump's regulators have considered a record-high fine against Facebook for alleged privacy violations.

Read Thomas Winslow Hazlett on making the Fairness Doctrine great again, and Nick Gillespie on the bipartisan urge to regulate disruptive technologies. I interviewed Crews and others in a Reason TV doc on Trump's deregulation last year: