What the New HBO Brexit Film Gets Wrong

Leavers aren't the sinister, racist, champagne wasters they're made out to be. 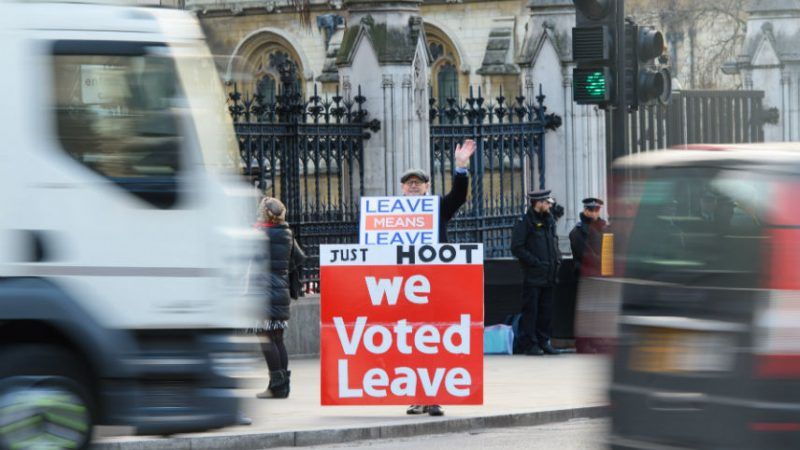 There's a bizarre moment in Brexit: The Uncivil War, the HBO drama about Britain's 2016 E.U. referendum. Robert Mercer, the Trump-supporting American billionaire, is shown offering his services to Arron Banks, a Leave-supporting British businessman. It's an incongruous scene, and feels as if it has been spliced in from a cheap spy thriller. "Data is power," whispers Mercer from the shadows like some cartoon supervillain.

That meeting never happened. And in any case, much to his annoyance, the puerile Banks was not allowed anywhere near the official Leave campaign. I should know. I was the man who hired Vote Leave's excellent Chief Executive, Matthew Elliot, and thus set up the campaign. A subsequent investigation by Britain's Information Commissioner's Office—which has been doing its damndest to find some wrongdoing on behalf of Leave—found "no evidence" that Mercer's company, Cambridge Analytica, was "involved in any data analytics work with the E.U. Referendum campaigns."

The meeting, in other words, would have been irrelevant even it had happened; but it didn't. Now a certain amount of dramatic license is to be expected in a play, but the fictitious Mercer meeting serves no dramatic purpose whatever. It is a glitch, an odd anomaly that interrupts the narrative. Its sole purpose is to leave the viewer with a vague sense that Brexit and Trump are somehow connected, two sides of the same populist coin.

That notion has become so affixed to the official narrative on both sides of the Atlantic that it is remarkably hard to peel it away. Inevitably, there were some resemblances between the two movements, as there must be necessarily among all anti-status quo campaigns. Both drew on a sense that the political elites had become self-serving and out-of-touch. Both spoke to and for voters who felt that the system wasn't delivering for them. But we should be careful of overdoing the parallel.

For example, there was nothing remotely protectionist about the Brexit campaign. On the contrary, a big part of its argument was that it wanted Britain to break free from the E.U.'s customs union and strike trade deals around the world. Donald Trump ran on the basis that he didn't want free trade with China. Vote Leave, by contrast, campaigned on the basis that it did want free trade with China, and that Britain must leave the E.U. to get it.

If you read the Financial Times or, even more, The New York Times, you might find that surprising. For two-and-a-half years, those newspapers, and other media that share their outlook, have promulgated the view that Brexit is essentially angry, nostalgic, and nativist. The only possible reason to have voted Leave, they believe, is hostility to immigration. Inconveniently, the polls consistently showed that democratic rule was a much bigger motivator for Leave voters than border control, but—as people tend to do—Europhile commentators began with their conclusions. It wasn't that they weighed and then dismissed the economic or democratic arguments for withdrawal; they never registered them.

They assumed Brexit would lead to a more protectionist and isolationist—and therefore more impoverished—Britain. Indeed, the very act of voting Leave would, they thought, bring about a recession as international investors pulled out.

Inconveniently for these commentators—I suppose there is another parallel with Trump here—Britain has boomed since the vote. The U.K. Treasury had forecast that, within two years of a Leave vote, unemployment would rise by an eye-watering 500,000. In fact, when we reached the two-year point, it had fallen by 700,000, and has since fallen by another 100,000. Exports, manufacturing output, the stock exchange, growth and consumer confidence have all risen. Again, New York Times readers could be forgiven for not knowing any of this.

Which brings us to the main flaw in Brexit: The Uncivil War. Its writer, a center-left Remain voter called James Graham, presents Brexit as having stirred up hatred, making people more intolerant. In one scene, a woman in a focus group is accused of being racist. Bursting into tears, she declares that she will vote Leave because she is fed up with "being treated as if I know nothing, as if I have nothing, as if I am nothing." The focus group breaks down in acrimony as (we are invited to believe) Britain itself has done.

But here's the odd thing. Britain remains one of the most—arguably the most—tolerant and open country in the E.U. There are various ways of measuring this. One is the sheer quantity of E.U. nationals who choose to live in the U.K., now numbering over 3 million, many more than before the referendum. Plainly these migrants don't fear that they are coming to a racist or unwelcoming country—or, indeed, to a country with an uncertain economic future. Another measure is the polling data: British voters are likelier than any others in the E.U. to see immigration as a net positive. Interestingly, they have become more positive since the Brexit vote. It turns out that, when people feel that they are in control, populism loses its appeal. Which brings us to a third measure: Britain is now almost the only E.U. state with no demagogic anti-immigrant party in its legislature. The U.K. Independence Party collapsed the moment the referendum result came in. Brexit, you might say, is already working.

It's true, sadly, that there is a new and unpleasant tone in Britain's public discourse. But the unpleasantness is not directed at foreigners or immigrants. Nor was it much in evidence during the referendum campaign itself. It began, rather, after the vote, and has largely been driven by the refusal by some Remainers—a minority, to be sure, but a vocal one—to accept the result. We keep being told that Leavers are stupid, elderly and bigoted, that they were lied to by unscrupulous rabble-rousers, that they were funded by Putin, that they won by cheating.

Some of these tropes—especially the last, the idea that there was chicanery during the campaign—are repeated in this drama. Viewers are encouraged to believe that Vote Leave won, if not exactly by cheating, then at least by an ingenious use of algorithms that bordered on the immoral. But this is nonsense. Sure, Leave might have had better—or better-targeted—online advertisements than the other side, but that is hardly nefarious. No, the reason that Leave won was not that it fought a better campaign, but that Britain had had enough of the E.U.

In 1975, the country voted by 2-to-1 to stay in what was then a common market––an association of nations mainly concerned with trade and economics. By 2016, the E.U. had acquired a president, an elected parliament, legal personality, representation in international institutions, a currency, a passport, a driving license, a national anthem, and a flag. At the same time, it had gone from growth and prosperity (the three decades after the Second World War were known as the Trente Glorieuses in France and the Wirtschaftswunder or "economic miracle" in Germany) to sluggishness and sclerosis. Its share of world GDP fell from 36 to 16 percent. That, rather than clever advertising, is what explains the result.

Of course, that would make for an unsatisfying drama. So we are instead presented with the idea that Vote Leave won by hiring a demented genius—Dominic Cummings, played by Benedict Cumberbatch. Now Dom is certainly a very clever guy (though the idea that he hears imaginary noises is silly). His best friends will admit that he can be impatient with less clever people. At the end of the day, though, he was not a demon; he was a political strategist who was good at his job.

Watch closely and you'll see that, with the partial exception of Dom, every Leaver is portrayed in a hostile manner. While the Remainers are shown as decent, if naïve, the Leavers are shown as both dumb and wrong. The chief Remain strategist, Craig Oliver (played by Rory Kinnear) is shown holding a conference call while dishing up a meal for his daughters. Leavers, by contrast, are shown spraying champagne around—always a bad-guy signifier in British drama (we'd never have been so arrogant as to stock up on champagne before the result and, in any case, the character doing the spraying, Douglas Carswell, doesn't drink). The only thing that could have marked us out as worse would have been placing cigarettes in our hands.

The actors had our mannerisms and tics beautifully—including mine, which was faintly unsettling to watch. But remember that what you're seeing is a drama. It didn't really happen that way.

By the end, the viewer is left with the impression that the referendum amounted almost to a coup—a coup pulled off by a clique of obsessives with a mad genius in tow and some sort of unspecified link to Trump.

In fact, the referendum represented almost precisely the opposite. Britain's elites were clinging to the 1950s ideal of a united Europe long after it had passed its sell-by date. What carried the day was the warm and optimistic conviction of the non-political classes that decisions should be made closer to home. What country, after all, ever got poorer as a result of becoming more independent? The United States voted Leave in 1776; and, from where I'm standing, things seem to have worked out OK for you.

Daniel Hannan is a Conservative Member of the European Parliament and was a founder of Vote Leave.