How Is It OK for CNN to Hire Possible Presidential Contender John Kasich?

"This is not me promoting anything, including myself," the former Ohio governor says, while promoting himself. 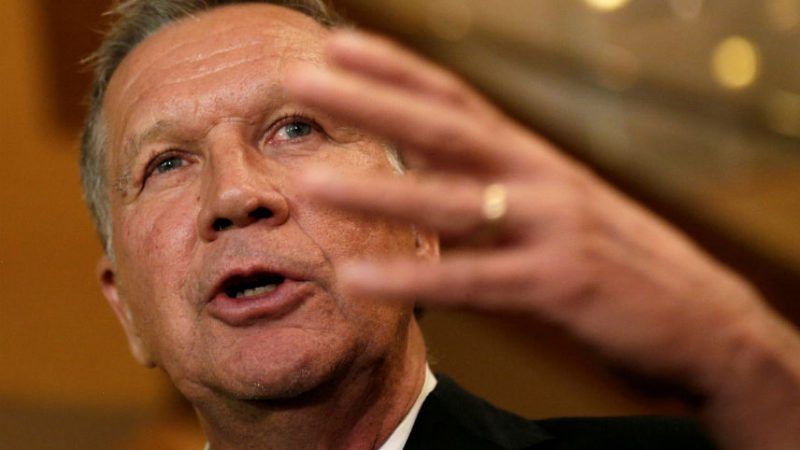 Kicking off his first appearance as a paid contributor to "the most trusted name in news," Kasich vowed to "deal with the elephant in the room," and then promptly did not, if by "elephant" you mean whether he's going to run for president against Donald Trump in 2020. Instead, he assured viewers that "I'm going to be like an umpire, calling balls and strikes," and that he was just here "to help people understand, as best as I can, the way things work on the inside." Oh, "and by the way, this is not me promoting anything, including myself."

It's true that CNN ranks a frequently distant third in the cable news wars, but even audiences of 700,000 largely geriatric news junkies constitute real promotional opportunities, and not just for reverse mortgages and Chantix. In his initial eight-minute act of political umpiring, covering everything from the William Barr confirmation hearings to the government shutdown to censure of Rep. Steve King (R-Iowa), Kasich managed to fit in more testimonials about himself than a typical cable news contributor might offer in a year.

"Nobody's going to pressure me, nobody's going talk me into anything," he declared, just like normal political commentators do. "I have people that have walked up to me all the time, and they have looked at me as a straight shooter, and they're of both political parties," he reported. "I've always been an independent, remain an independent person—let's look at the problem and let's go fix it," he said. "I don't care who the president is, the president has to be big enough to say, 'Let's get this behind us.'" And my personal favorite: "When Mitt Romney wrote that op-ed piece, and everybody got worked up down there? I probably would have written three by now."

So it's easy to see the benefits from Kasich's point of view—regular opportunities to self-promote and criticize the political competition in the run-up to a possible campaign announcement, and you get paid? Sign me up! But the real head-scratcher here is the behavior of CNN.

The first cable news network is also frequently the most sanctimonious defender of journalistic nobility, and loudest critic of the way President Donald Trump degrades the norms of America's political and media culture. And yet here those same people are, paying a newsmaker for exclusivity, and creating a norm that was unthinkable even four years ago.

As CNN Reliable Sources host Brian Stelter dryly phrased it, "In the past, CNN and other cable news channels have broken off ties with commentators once they took specific steps to run for office." In fact, four years ago this month, that's exactly what Fox News did with Mike Huckabee.

"I won't make a decision about running until late in the spring of 2015, but the continued chatter has put Fox News into a position that is not fair to them," the then-Fox host wrote to his supporters, explaining the mutual decision. "The honorable thing to do at this point is to end my tenure here at Fox so I can openly talk with potential donors and supporters and gauge support." Fox had severed its contributor contract with presidential contender Ben Carson a few months prior to that.

This is what CNN used to do with potential candidates like Pat Buchanan. As Stelter put it back when he worked for The New York Times, "The benefit to the viewers" in hiring potential candidates as contributors "is less clear. Some experts say the arrangements can cloud the objectivity of the news organizations":

"As long as they are still newsmakers, there is a strong potential for conflict," said Andy Schotz, the chairman of the ethics committee for the Society of Professional Journalists. At the very least, it can amount to an advantage for the analysts, and create a perception of favoritism.

It will be interesting to see whether Stelter will show the same interest in probing these conflicts on this weekend's Reliable Sources.