Naomi Klein misses the meaning of "the miracles Puerto Ricans have been quietly pulling off while their government fails them."

Tate Watkins | From the January 2019 issue 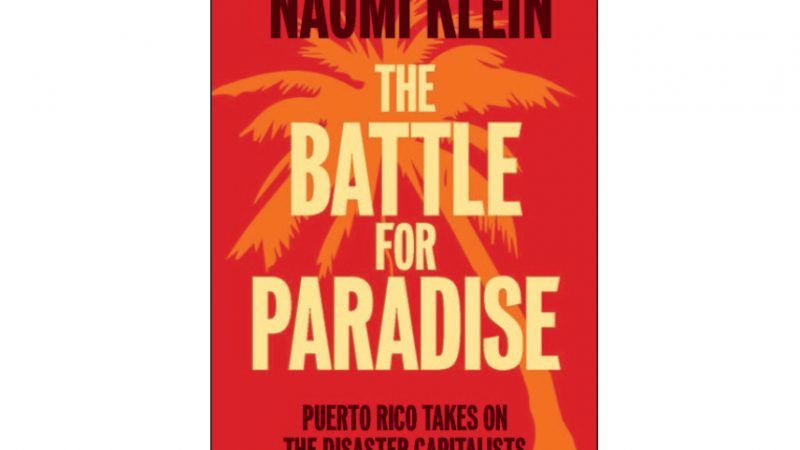 Late every summer, there's a breadfruit festival in Humacao, a Puerto Rican town not far from where Hurricane Maria made landfall on September 20, 2017. The leftist journalist Naomi Klein describes the scene when she visited, months after the storm struck: "Women who usually do the cooking for the festival came together, pooled whatever food they could find, and made hot, healthy meals for about 400 people a day. Day after day. Week after week. Month after month. They are doing it still."

Maria struck Puerto Rico with sustained 175 mph winds, damaging half a million dwellings and decimating the island's electrical grid and cellphone infrastructure. About 80 percent of the harvest was lost. After initially claiming the storm killed 64 people, the government posted a preliminary report online in July acknowledging that the death count was much higher. The official estimate is now 2,975.

In her brief book The Battle for Paradise, Klein describes several community-driven recovery efforts that sprouted after the disaster—what she calls "the miracles Puerto Ricans have been quietly pulling off while their government fails them." Humacao was hardly unique: She paints a similar scene, for example, in Casa Pueblo, a community center in the small mountain town of Adjuntas. "It would be weeks before the Federal Emergency Management Agency [FEMA] or any other agency would arrive with significant aid," she writes, "so people flocked to Casa Pueblo to collect food, water, tarps, and chainsaws—and draw on its priceless power supply to charge up their electronics," including oxygen machines that elderly locals relied on to survive.

The solar panels that powered the center mark a sharp contrast with PREPA, Puerto Rico's electric utility, which was mired in corruption and debt long before the storm. It took nearly a year to restore semiregular power to the island. When government aid finally arrived to the area, Klein notes, it was "shockingly inadequate: military-style rations and FEMA's now notorious boxes filled with Skittles, processed meats, and Cheez-It crackers."

These stories are representative of the reportage that fills The Battle for Paradise, and they will remind many readers of a post-disaster trope: The true first responders and the most steadfast rebuilders are the survivors themselves. But in documenting these organic recovery efforts across the island, Klein makes a broader argument: that "now is not the moment for reconstruction of what was, but rather for transformation into what could be." There, as she lays out two paths Puerto Rico could take, her analysis goes awry.

In Klein's view, the island's ordinary citizens are entrenched against what she dubs "the invasion of the Puertopians"—outsiders who want to harness capitalism to turn the territory into a "visitor economy" with "a radically downsized state and many fewer Puerto Ricans living on the island." Her subtitle frames the battle: Puerto Rico Takes on the Disaster Capitalists. "One dream," she writes, "is grounded in a desire for people to exercise collective sovereignty over their land, energy, food, and water; the other in a desire for a small elite to secede from the reach of government altogether, liberated to accumulate unlimited private profit."

Framing the future of an entire people with two utopias can be described only one way: extreme. Klein focuses on "newly minted cryptocurrency millionaires and billionaires" who have been drawn to the island for conferences on the promise of unrivaled tax incentives and enclaved beach resorts. They essentially serve as the play pieces in a game she dubs a "libertarian project" to reshape the island into something that she makes sound as scary as possible. Yet she never makes much of a case as to why or how such a project might actually succeed.

Nor does she explain why libertarianism—a worldview that celebrates decentralized, noncoercive self-organization—would be at odds with the bottom-up, community-based responses to the hurricane that she highlights. If anything, such activities belong at the center of any libertarian argument about disaster recovery. "Precisely because the official response to the hurricane has been so devoid of urgency," Klein notes at one point, "Puerto Ricans on the island and in the diaspora have been forced to organize themselves on a stunning scale." Libertarians would note that the social resilience and local knowledge that routinely prevail in the face of crisis are some of the best arguments for keeping bureaucracy out of the way when it comes to disaster response and, later, recovery.

Klein conflates being pro-market with being pro-business. In reality, when opportunists use a state of emergency to push through crony-capitalist measures—like the no-bid, no-accountability contracts so often awarded during disaster response efforts—that's exactly the type of corruption that libertarians, and often only libertarians, can be depended upon to call out, whether it comes from the left or the right.

No doubt many of the blockchain enthusiasts drawn to sunshine buy into the mirage being sold by Puerto Rico Gov. Ricardo Rosselló when he calls the post-Maria island a "blank canvas." Rosselló must know better, and he must know that there is no such thing as a clean slate for a territory that faced $73 billion in debt before the hurricane, has been in a recession for over a decade, and was already seeing its population flee for the mainland in record numbers pre-storm.

In 2016, Congress farmed out the hard decisions to be made about the territory's debt to a seven-person financial board. As Klein notes, some Puerto Ricans believe much of the debt is illegal and should be erased. But as a practical matter, Puerto Rico will somehow have to deal with that debt, among other pragmatic challenges, as it muddles through its recovery.

Here Klein has few useful insights to offer. Take PREPA, which has been in a mess from mismanagement and poor oversight for ages. A consultancy report issued nearly a year before Hurricane Maria noted that "transmission and distribution systems are literally falling apart: They are cracking, corroding, and collapsing." It concluded that PREPA was "failing at the basic mandate of an electric utility." Yet Klein's lament is that the government plans to privatize the utility, which is responsible for $9 billion of debt, even as she later acknowledges that "PREPA is so broke it can't pay the bills."

Similarly, Klein finds it easy to decry the idea of a "visitor economy" that caters to wealthy outsiders. Yet more tourism may not be a bad play for a Caribbean island that accepts U.S. dollars, has plenty of English speakers, and is just a couple of hours from Miami but that has a tourism sector less than half as large as Hawaii's. You don't need to be a crony capitalist or a "Puertopian" to see that.

To her credit, Klein nails one fundamental issue that has faced Puerto Ricans since well before the hurricane struck: their lack of basic democratic rights. The islanders are, as she puts it, "unable to vote for president or Congress but forced to live under U.S. laws." Even the French Caribbean Martinique and Guadeloupe can vote in France's presidential elections.

"A senator told me that if the power hadn't been fully restored in his state within a month, there would have been mayhem," Gov. Rosselló recently told The Economist. "Puerto Rico has been part of the U.S. for more than 100 years, but we're still treated as second-class citizens. Anything would be better than this." The same report noted that in a political science class at a university in Humacao, none of the 30 students knew more than a few words of the "Star-Spangled Banner." The students had nothing against the United States, they said; it just didn't feel like their country.

Judging by how badly the federal government has failed the island following last year's storm, many people on the mainland agree. If Maria left behind any sort of canvas, it's one that is painted with a clear message: After a century in second class, it's time to grant Puerto Ricans the autonomy they deserve.

Tate Watkins is a research fellow at the Property and Environment Research Center (PERC), a nonprofit dedicated to improving environmental quality through property rights and markets.