D.C. vs. the Wide Open West

The relationship between the people who inhabit those spaces and their distant and often distrusted imperial government. 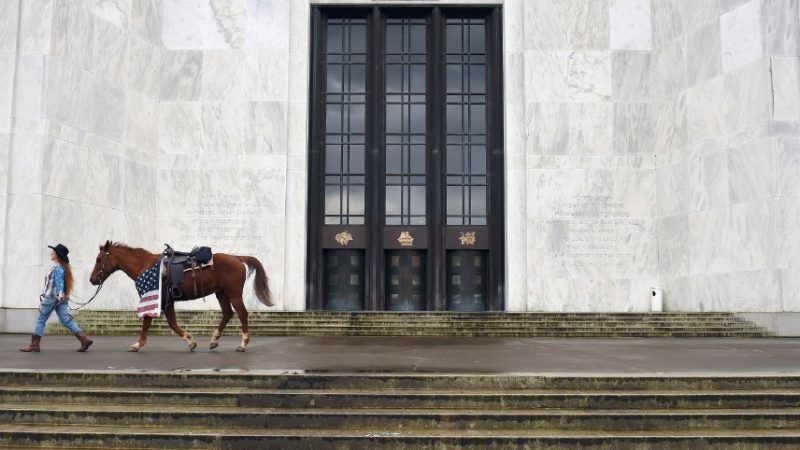 One of the great ironies of life in mountain and desert states is that many of the people you meet are either escapees or descendants of the East Coast—but they ended up in a place where Washington, D.C., has an enormous presence. The federal government owns more than 60 percent of Alaska and "46.4 percent of the 11 coterminous western states," the Congressional Research Service reported in 2012. Elsewhere in the U.S., by contrast, the feds' share is just 4 percent.

To say the feds "manage" these lands is an affront to clear language. As Shawn Regan, a former Park Service ranger turned scholar at the Property and Environment Research Center, wrote in The Wall Street Journal in April 2015, "the Forest Service and the Bureau of Land Management lose $2 billion each year" in the effort.

Some of that property is just more or less being hoarded. Almost 10 million acres of federal land in the West—roughly equivalent to the combined area of Connecticut and New Hampshire—is "entirely landlocked, and can be accessed only with the permission of the neighboring private landowners," according to the Theodore Roosevelt Conservation Partnership. That means plots that have theoretically been put aside for public use instead serve as some very lucky people's backyards.

Resisting this federal overreach and mismanagement can be dangerous, as the Bundy family of Nevada and the Hammond family of Oregon discovered when they ran afoul of D.C. officials over grazing rights and fire suppression, respectively. Most media outlets told the public that the Bundys were violent fanatics and the Hammonds were arsonists. It was only when their cases went to trial that word leaked out that the feds had played fast and loose with the expectations of justice by hiding exculpatory evidence from defense counsel, wildly overcharging defendants with crimes that didn't fit the facts, and lying about the use of snipers and other provocative and potentially lethal conduct.

That human lives were at stake is clear from the shooting death of Arizona rancher LaVoy Finicum as a result of the 2016 Malheur National Wildlife Refuge occupation. That standoff started as a radicalized Ammon Bundy and members of his D.C.-skeptical Citizens for Constitutional Freedom protesting the arrest and imprisonment of Dwight and Steven Hammond in their dispute with the federal government. While Finicum was publicly fingered by officials as the instigator of the lethal encounter, an independent investigation by Deschutes County Sheriff Shane Nelson led to the indictment of an FBI agent for failing to report firing two rounds that may have triggered the deadly incident. The agent was acquitted, but an FBI agent at the scene does appear to have fired on the occupiers. Sheriff Nelson lamented that FBI actions like those "damage the integrity of the entire law enforcement profession." Jurors later acquitted seven Malheur protesters in a wild courtroom scene that culminated in the tasing and tackling of a defense attorney by federal marshals after he demanded that his victorious client be released.

The trial of Cliven, Ammon, and Ryan Bundy over their 2014 standoff with federal officials, meanwhile, shuddered to a halt after Larry Wooten, a lead investigator and case agent for the government, wrote an 18-page memo charging that Bureau of Land Management Special Agent in Charge Dan Love, the Bundys' nemesis, had decided to "command the most intrusive, oppressive, large scale, and militaristic" operation possible. Wooten added that his "investigation also indicated excessive use of force, civil rights and policy violations," and he alleged that prosecutors covered up misconduct and suppressed evidence that might have helped the defense.

Earlier prosecutions of other defendants in the Bundy standoff had already resulted in a deadlocked jury and acquittals. This time, even before Wooten's memo, U.S. District Judge Gloria Navarro had suspended proceedings out of concern that the feds were flouting evidentiary rules. On January 8, 2018, she dismissed all charges because of "flagrant prosecutorial misconduct."

President Donald Trump seemingly brought these shameful episodes to a close when he pardoned the Hammonds in July 2018, but Western resentment over federal control of much of the landscape and resources here still simmers. At its root is a conflict of visions about the use of beautiful and unforgiving open spaces, but also about the relationship between the people who inhabit those spaces and their distant and often distrusted imperial government.