Plus: RIP The Weekly Standard?, America loves exercise science, and court says no to ban on speech promoting illegal immigration. 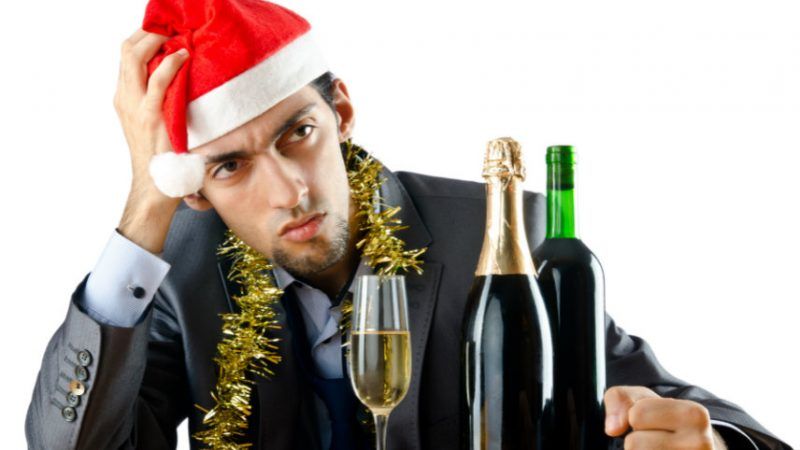 Happy Repeal Day! Indiana only lets gas stations sell beer if the beverages are warm. Ohio bans alcohol ads from featuring Santa Claus (and many states stop alcohol sales on Christmas). In Utah, mini liquor bottles are banned, but in Washington, D.C., purchasers must buy six at a time.

The prohibition era may be long past, but America is still awash with puritanical, patronizing, cronyist, and otherwise crappy booze laws. To celebrate the 85th anniversary of the U.S. alcohol ban's repeal—and encourage us to stop repeating the era's mistakes—the R Street Institute has ferreted out "America's Dumbest Drinking Laws" that are still on the books.

"While prohibition has indeed been relegated to the dustbin of history, we're still far from free when it comes to drinking," write R Street's Jarrett Dieterle and Daniel DiLoreto. "Even today, alcohol continues to be subjected to a host of nonsensical, onerous and sometimes downright silly restrictions."

Dieterle and DiLoreto scouted bad laws to put together "the definitive list of the Worst Booze Laws in America," singling out 12 top offenders. Among them:

• Alabama's prohibition on alcohol labels that feature "a person posed in an immoral or sensuous manner."

During that time in American history, the condescending myth of the "drunken Indian" was pervasive and led to a whole host of paternalistic laws being implemented regarding tribal lands and booze. … In 2015, the Confederated Tribes of the Chehalis Reservation in Washington State attempted to open a distillery on their land, only to be rebuffed. They and others have tried to pressure Congress to scrap this outdated and offensive law but, so far, to no avail.

A bill passed by Congress last week would change this and is awaiting the president's signature.

• Virginia ratio rules requiring restaurants with liquor licenses to sell at least $45 of food and non-alcoholic beverages for every $55 worth of liquor—a rule that has thwarted craft cocktail bar scene in the state.

One bad booze law not on the R Street report has been getting attention around these parts lately: a Virginia ban on happy hour advertising. "In the Old Dominion, it's legal for businesses to offer happy hour. It's just illegal for them to talk about it," explained the Pacific Legal Foundation's Anastasia Boden at The Washington Post last week. More:

Those that dare to advertise the happy-hour price of a beer or use creative terms such as "Sunday Funday" to pitch the demon rum face big fines or a suspended permit from the state's Alcoholic Beverage Control Authority.

Restaurant owner Geoff Tracy is challenging the law on First Amendment grounds, with a lawsuit filed in the U.S. District Court for the Eastern District of Virginia.

RIP The Weekly Standard? The publisher of the once-venerated neo-con magazine is reportedly killing it in order to direct its focus to another property, The Washington Examiner. Clarity Media Group announced Monday that the Examiner will expand to national distribution starting in January.

"This is not about dwindling subscribers," one inside source told Vox's Jane Coaston. "This is about strip-mining TWS for its assets"—subscriber lists, etc.—and that's why a potential sale to other owners was nixed.

Evidence for this assertion can be found in the latest data from the Bureau of Labor Statistics. Fitness instructors and trainers rose from 182,280 in 2004 to about 280,080 in 2017. "If the federal statistics are accurate," writes Stoll, "America has added about 100,000 yoga instructors, personal trainers, and spin class teachers in the past 14 years or so, but only about 14,000 ministers, rabbis, priests and imams."

• It's not OK to criminalize speech that encourages illegal entry into—or illegal stays—in the U.S., per a new ruling from the 9th Circuit Court of Appeals yesterday.

• Rudy Giuliani goes full Clueless Old on Twitter after accidentally inserting an anti-Trump hyperlink into his own tweet.

• "Why the policing of the world's oldest profession is still caught between science and morality": a interactive article at Atavist takes a look at the challenges criminalized sex workers face in South Africa and the Netherlands.

• On sex work decriminalization versus legalization:

A million times this. PEOPLE are not OBJECTS, and you can't regulate the two things exactly the same way. If you wish examples of how sex work businesses could be fairly and safely regulated, just look to the laws of New Zealand or New South Wales. https://t.co/51dZozdFKu

• ICYMI yesterday: advocates are now insisting that women make only 49 cents for every dollar a man does.

• A little bit of good economic news, brought to you by J.D. Tuccille and the Tax Foundation.

• And even more good news: The Marvelous Mrs. Maisel is back.