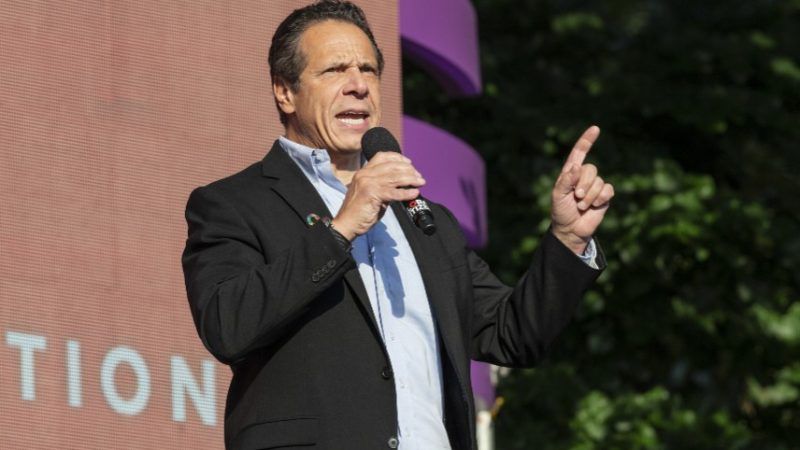 Andrew Cuomo's methods may be obscure, but his assault on the First Amendment is anything but subtle. "If the @NRA goes bankrupt because of the State of New York," the governor tweeted in August, "they'll be in my thoughts and prayers. I'll see you in court."

That court is expected to decide any day now whether the National Rifle Association can proceed with its federal lawsuit against Cuomo, which charges him with using the state's Department of Financial Services (DFS) to pursue a "political vendetta against the NRA." The American Civil Liberties Union thinks the case should be heard, and it's not hard to see why, given Cuomo's thuggish abuse of regulatory powers to punish his opponents in the gun control debate.

"I am directing the Department of Financial Services to urge insurers and bankers statewide to determine whether any relationship they may have with the NRA or similar organizations sends the wrong message to their clients and their communities," Cuomo said last April. "This is not just a matter of reputation, it is a matter of public safety, and working together, we can put an end to gun violence in New York once and for all."

Maria Vullo, who runs DFS, was even more explicit. "DFS urges all insurance companies and banks doing business in New York to join the companies that have already discontinued their arrangements with the NRA," she said in the same press release.

Two weeks later, as if to underline the dangers of doing business with "gun promotion organizations," DFS announced a consent decree with Lockton Companies, the New York administrator of Carry Guard, the NRA's liability insurance program for people who use firearms in self-defense. Lockton agreed to pay a $7 million fine for alleged violations of state regulations and promised to stop helping the NRA with insurance programs in New York, regardless of their legality.

Five days later, DFS touted a consent decree with Chubb, which underwrote the Carry Guard program overseen by Lockton. Chubb agreed to pay $1.3 million and shun the NRA not just in New York but throughout the world.

Lloyd's of London severed its relationship with the NRA two days after the Chubb consent decree was announced. Because of the state's implicit threats, the NRA says, it has had trouble finding companies willing to provide even basic banking and insurance services, much to Cuomo's gloating delight.

NRA critics who are inclined to share in that delight should consider the principle at stake here. "If the script was flipped," NRA lawyer William Brewer noted in an interview with Fox News, "and a conservative governor of Kansas was very pro-life, his administration could target Planned Parenthood's financial activity." Or insert the name of your favorite advocacy group.

The legal rationale for Cuomo's efforts to cut off the NRA's access to financial services, to the extent that one exists, is based on the concept of "reputation risk," one aspect of the "safety and soundness" that financial regulations are supposed to promote. In using a broad definition of reputation risk to attack legal commercial activities that offend him, Cuomo is taking a page from the Obama administration's Operation Choke Point, which mainly targeted payday lenders but also cautioned banks against serving "high-risk" dealers in pornography, firearms, and "racist materials," all of which are not just legal but constitutionally protected.

Cuomo seems to think there is no reputation risk for Democrats who violate the constitutional rights of their political opponents. I hope he is wrong.

Update: In a decision released on Tuesday night, U.S. District Judge Thomas McAvoy ruled that the NRA's case should proceed. "The allegations in the Amended Complaint are sufficient to create a plausible inference that the Guidance Letters and Cuomo Press Release, when read together and in the context of the alleged backroom exhortations and public announcements of the Consent Orders, constituted implicit threats of adverse action against financial institutions and insurers that did not disassociate from the NRA," McAvoy writes. "The Amended Complaint contains sufficient allegations plausibly supporting the conclusion that Defendants' actions were taken in an effort to suppress the NRA's gun promotion advocacy. Moreover, the NRA's allegations that Defendants' enforcement actions against Lockton and Chubb impeded the NRA's ability to enter contracts for lawful affinity insurance plans, but did not take similar action against other membership organizations that did not engage in gun promotion advocacy…provides a plausible basis to conclude that Defendants sought to impose a content-based restriction on NRA-affiliated businesses based on viewpoint animus that serves no substantial government interest." More here.