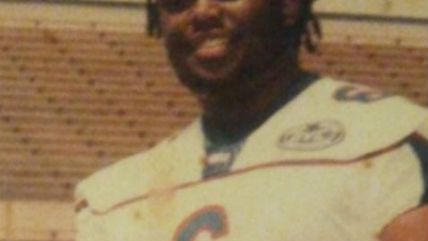 After 11 years behind bars, a Tennessee man whose mandatory minimum sentence for a first-time drug offense drew local and national attention will be freed today, his lawyer announced.

Calvin Bryant was sentenced to 17 years in prison, 15 of them mandatory, for a first-time drug offense under Tennessee's drug-free school zone laws, which rank among the harshest in the nation. Since then, his supporters—family, friends, criminal justice advocacy groups, members of the Nashville City Council, and even one of the prosecutors who put Bryant behind bars—have worked to free him. Reason reported on Bryant's case last year.

According to Bryant's lawyer, Daniel Horwitz, the Davidson County District Attorney, Glenn Funk, convinced the Tennessee Attorney General's office to drop its opposition to Bryant's appeal of his sentence, and instead let him plead guilty to a reduced charge and be released on time served.

"We are deeply grateful for the outpouring of support for Mr. Bryant from across the city, the state, and the nation," Horwitz said in a statement. "Without so many people standing behind him—and without a District Attorney who was willing to use his discretion to remedy a gross and obvious injustice—this result would never have been possible, and after more than a decade of purposeless incarceration for a first-time non-violent drug offense, Mr. Bryant would still be counting the days until the end of his seventeenth year in prison."

Bryant was once a college student, well-liked in his community, and a former high school football standout who dreamed of going pro in the NFL. As Reason reported:

Police arrested Bryant in 2008 for selling 320 pills, mostly ecstasy, out of his Nashville apartment to a confidential informant who'd been bugging him. Tennessee treats this as a serious offense under any circumstances: Normally he would have faced at least two and a half years in prison. But because Bryant lived in a housing project within 1,000 feet of an elementary school—roughly three city blocks—his sentence was automatically enhanced under Tennessee's drug-free school zone laws to the same category as rape or second-degree murder.

Indeed, as someone with no prior adult criminal record, Bryant would have been eligible for release earlier if he'd committed one of those violent felonies.

As a 2017 Reason investigation showed, Tennessee's drug-free school zones cover wide swaths of urban areas—27 percent of Nashville, for instance—and apply day or night, indoors or outdoors, even when school is not in session. And drug-free school zone offenses, according to interviews with prosecutors and defense attorneys, almost never involve actual sales of drugs to minors. When prosecutors charge a defendant with a drug-free school zone offense, it automatically enhances the felony level, turning low-level felonies into long, mandatory prison sentences that rival those of the worst crimes.

Funk was elected D.A. in 2014, and his office has a policy of not charging defendants with a drug-free school zone enhancement unless the offense actually involves minors.

"In places like Nashville, almost the entire city is a drug-free zone," Funk told Reason last year. "Every church has day care, and they are a part of drug-free zones. Also, public parks and seven or eight other places are included in this classification. And almost everybody who has driven a car has driven through a school zone. What we had essentially done, unwittingly, was increased drug penalties to equal murder penalties without having any real basis for protecting kids while they're in school."

"Tennessee's broken law mandated a 15-year mandatory minimum sentence for Calvin, for which Tennessee has enjoyed no legitimate public safety benefit, while his family and friends suffered for more than a decade," FAMM president Kevin Ring said in a press release. "While Calvin was able to receive the relief he so clearly deserved through the courts, FAMM will continue to call on Gov. Bill Haslam to consider clemency for the hundreds of other Tennesseans serving wasteful, unjust sentences under this law."