Movie Reviews: Halloween and Can You Ever Forgive Me? 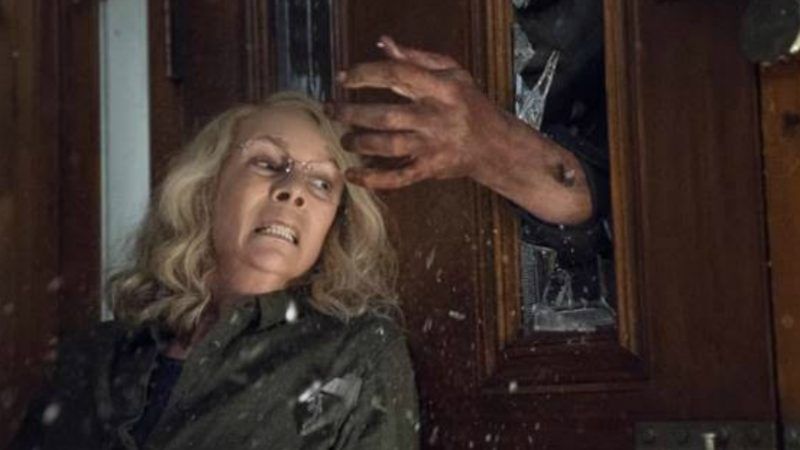 The new Halloween is a welcome opportunity to forget all the nonsense we learned from the nine sequels and reboots that preceded it. No more need to pretend that Laurie Strode is Michael Myers' sister. Or that we ever bought into the idea that Michael was being controlled by some kooky Druid Halloween cult. Or that we weren't annoyed by the dumb forest hermit, or the oops-wrong-guy axe-murder fakeout, or the sudden insertion of Busta Rhymes—Busta Rhymes!—into the tottering franchise.

No, it's a new day in Haddonfield—a better day, presumably, because in this direct sequel to John Carpenter's 1978 slasher classic, the once-unstoppable Michael Myers is still locked away in the Smith's Grove sanitarium and things are quiet. It's been 40 years now, and you'd think Laurie Strode (Jamie Lee Curtis, back in the role for the first time in 16 years) would be over her many ordeals with the masked man, but no—she's now a full-fledged crazy lady, socked away in a heavily fortified house with a basement full of guns, totally ready for a final reckoning. And it's almost Halloween.

This is a movie made by big fans. Director David Gordon Greene wrote the script with his old film-school buddy Danny McBride and their mutual horror-head pal Jeff Fradley, and while they treat Carpenter's vintage creation with the respect it deserves, they also have fun with it. You can almost hear the chuckles Greene must have emitted looping in juicy sound effects to accompany the various hammer-bashings and head-crushings, and you figure it must have been a pass-the-bong moment when somebody came up with the idea of adding a little banh-mi sandwich humor.

The story gets underway with the arrival in town of two investigative podcasters (Jefferson Hall and Rhian Rees), who've persuaded Michael's sanitarium shrink, Dr. Sartain (Haluk Bilgeiner)—a disciple of the long-gone Dr. Loomis—to allow them to attempt an interview with his famous patient. This goes as well as you'd expect. But then the real purpose of these two characters is to die in memorable ways – which, Lord knows, they eventually do. (The site of their first meeting with Michael—a vast exercise yard with checkerboard paving and gibbering loonies scattered about—is a slick bit of production design.)

Curtis's Laurie spends much of the movie waiting around for her grudge match with Michael, leaving much of the field to her estranged and now-grown daughter, Karen (Judy Greer), and Karen's own daughter, the teenaged Allyson (Andi Matichak), whose presence enables the introduction of many lively high-school kids, some of them naturally doomed.

Plot improbabilities are deployed with amusing indifference. To get Michael out of the sanitarium and back on the loose, it is necessary to have him put aboard a bus for transport—suddenly, after 40 years—to a maximum-security lockup of some sort. (The bus crashes into a ditch, of course, etc., etc.) Later, when Laurie realizes the escaped Michael is coming after Allyson, she calls her with an urgent warning—but since Allyson just saw her boyfriend talking to another girl, instead of answering her phone, she throws it in a punch bowl. (When Michael finally does show up at another point, Allyson's immediate reaction is to run into the woods.)

Can You Ever Forgive Me?

Melissa McCarthy plays it straight in Can You Ever Forgive Me? She's still funny, but not in the loud, bellowy style with which she's often associated. Here, in the role of real-life author and late-in-life literary forger Lee Israel, she plays a woman with serious problems, none of which were probably fun to have. But McCarthy invests this troubled character with a bristling comic energy, and when she's onscreen with costar Richard E. Grant, who plays moth-eaten boulevardier Jack Hock, Lee's partner in high-end larceny, the movie expands into something more than the sum of its bio-pic parts—it's a study in big-screen comic chemistry.

The story begins in New York in 1991, when Lee Israel is at the end of her legitimate literary career. She's made a good living writing magazine profiles, and then hard-cover biographies of people like Tallulah Bankhead and game-show celebrity Dorothy Kilgallen. The Kilgallen book was a New York Times bestseller, but its follow-up, a biography of cosmetics entrepreneur Estée Lauder, made a beeline for the cutout bins—nobody cared. Lee has lost her knack, and she has nothing to fall back on. She's a fat, lonely lesbian alcoholic whose only mode of human interaction is a toxic sarcasm. She lives alone with her cat.

Knocking back doubles at a Village gay bar, Lee is approached by Jack Hock, a charming boozer and petty thief, and a man of purest urban sensibilities. (At the mention of someone thought to be deceased, he says, "Maybe she didn't die. Maybe she moved back to the suburbs. I always confuse those two.") Jack is not the sort of influence Lee needs at this precise moment, and before long she is embarked on a life of minor crime.

It begins when she's flipping through a book in a library and discovers three handwritten letters. They're from the pen of long-dead comic actress Fanny Brice. Lee takes one of these to a literary memorabilia store that specializes in collectible correspondence, and she gets $75 for it. It would have been more, she's told, if the content had been a little more special. So Lee goes home and carefully adds a postscript of her own to one of the other letters, and it sells for $300.

Soon she's creating celebrity letters out of whole cloth, and very successfully. ("I'm a better Dorothy Parker than Dorothy Parker" she tells Jack.) Over the course of two years, Lee sells about 400 fake celebrity letters (we see her at home aging the paper in her oven and switching among typewriters of a number of different vintages).

It couldn't last, of course. But when the FBI finally starts distributing be-on-the-lookout fliers with Lee's photo on them, she thinks she can extend her felonious career by having Jack do the in-person financial wrangling with the autograph dealers. Jack is a little too over-lubricated to pull this off for long, though, and soon the hammer of the law comes down (although lightly: a judge gives Lee six months' house arrest and five years' probation, and her attorney tells her "the Louise Brooks letter is really good").

McCarthy and Grant have a wonderful rapport that thrives on the droll repartee provided by screenwriters Nicole Holofcener and Jeff Whitty. (When Lee asks Jack if she can tell him a secret, Jack, who is HIV-positive, gives her the nod: "Who would I tell?" he says. "All my friends are dead.") Dolly Wells also has some sweet, winning scenes as a lonely bookstore owner who yearns to flirt with Lee, but can't quite work up the courage, and probably never will.

Director Marielle Heller, whose first feature, The Diary of a Teenage Girl, was an out-of-the-box classic, here comes up with another low-budget marvel. Shooting on the wintry streets of Manhattan, with no recourse to studio sets, she was constantly buffeted by considerations both financial and cultural. ("We were trying to shoot in bookstores, but they kept shutting down," she told Variety in a recent interview.) An actor and writer herself, Heller is a great director—she's able to set characters free on the screen to just be themselves. She was lucky to get McCarthy for this very offbeat film—but McCarthy, who's terrific in it, may have been even luckier to get her.