E-Cigarettes Are 'the Most Popular Stop Smoking Aid in England'

A new Public Health England report suggests the U.S. has fallen far behind in taking advantage of this harm-reducing alternative. 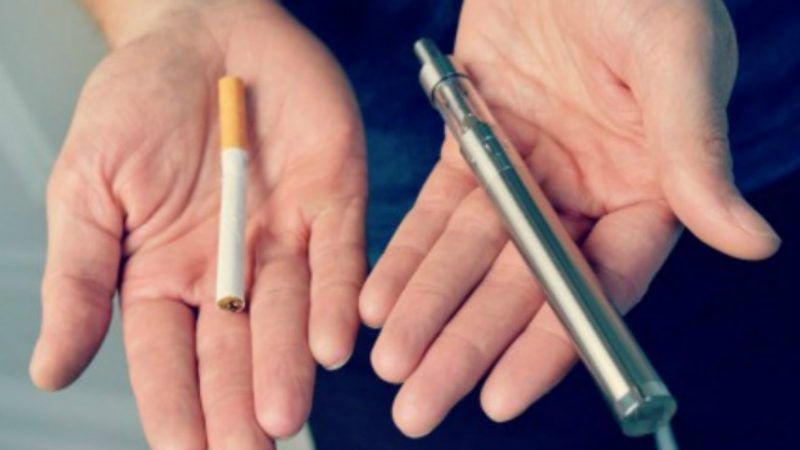 E-cigarettes are "the most popular stop smoking aid in England," according to a recent government report, which says they increase the likelihood of success by about 50 percent and reduce health risks by "at least 95%." The report from Public Health England (PHE) illustrates the continuing contrast between the way British officials talk about vaping and the way their American counterparts do.

About 2.5 million people use e-cigarettes in England, PHE says, and 51 percent, or almost 1.3 million, have stopped smoking entirely. Half of vapers who still smoke say they are using e-cigarettes in an effort to quit. By comparison, some 2.6 million vapers in the United States were former smokers as of 2016. Since the U.S. has a population six times as big as England's, it looks like we have fallen far behind in taking advantage of this harm-reducing alternative to smoking.

"There is growing evidence that e-cigarettes are helping many thousands of smokers in England to quit," PHE concludes. "The available evidence from research trials suggests that their effectiveness is broadly similar to prescribed stop smoking medicines and better than NRT [nicotine replacement therapy] products if these are used without any professional support. E-cigarettes are particularly effective when combined with expert help from a local stop smoking service."

The report links to a PHE blog post debunking six "myths around e-cigarettes," including fears that they cause "popcorn lung," that they "must be harmful as they contain nicotine," and that "exposure to e-cigarette vapour is harmful to bystanders." Perceiving e-cigarettes as a potentially lifesaving alternative to the conventional, combustible kind, PHE worries that misconceptions about vaping might discourage smokers from switching.

In the United States, by contrast, the Food and Drug Administration has belatedly and begrudgingly conceded the harm-reducing potential of e-cigarettes but is now threatening to crack down on them in the name of preventing underage vaping. Notably, PHE's list of e-cigarette myths includes the fear that they will lead to more smoking among teenagers. "UK surveys show that young people are experimenting with e-cigarettes, but regular use is rare and confined almost entirely to those who already smoke," PHE notes. "Meanwhile, smoking rates among young people in the UK continue to decline." U.S. surveys find the same patterns.